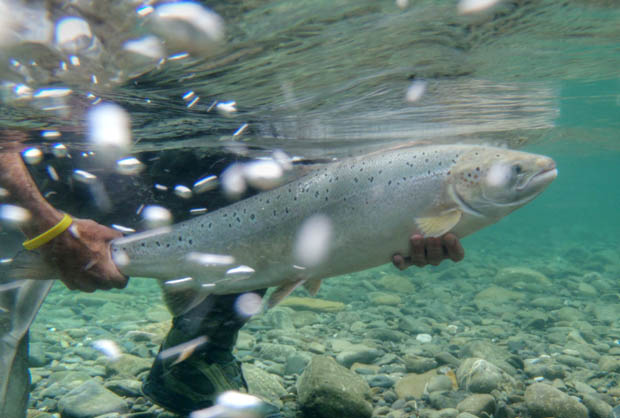 [dropcap]T[/dropcap]he Atlantic Salmon Federation (ASF) is very concerned about the continually increasing harvest by Greenland of Canadian Atlantic salmon in its mixed-population fishery. Greenland expanded its kill of wild Atlantic salmon from 47 tonnes in 2013 to 58 tonnes in 2014, far beyond sustainable levels for the species. 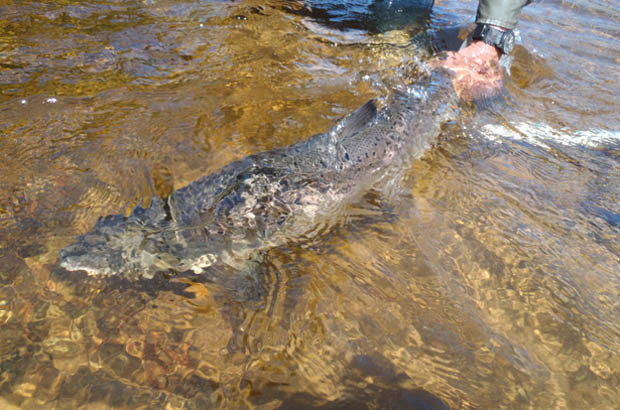 The latest report from the International Council for the Exploration of the Sea (ICES) indicates that for salmon that spent two winters on Greenland’s ocean feeding grounds returning to Canada in 2014, Greenland harvested 63%, Canada 35% and St-Pierre et Miquelon 2%.

The North Atlantic Salmon Conservation Organization (NASCO) will attempt to negotiate a multi-year agreement to regulate the Greenland salmon fishery at its annual meeting scheduled to take place in Happy Valley-Goose Bay, Labrador from June 2 – 5.

“Mixed-population fisheries are unacceptable human impacts upon salmon runs that are already suffering from habitat loss, interactions with farmed salmon, and changing environmental conditions,” said ASF President Bill Taylor.    “Harvest is one impact that effective government action can help solve and there are steps that can be taken this year that would have an immediate and very positive effect.”

The Government of Canada recently prohibited retention of wild Atlantic salmon for 2015 in the recreational fishery of New Brunswick, Nova Scotia and Prince Edward Island.  This conservation measure was announced in April by Minister of Fisheries and Oceans Gail Shea in response to dwindling salmon numbers as an interim measure that was recommended by the Ministerial Advisory Committee on Atlantic salmon.  Further recommendations to the Minister from the Committee are anticipated this summer and will hopefully achieve greater reductions in the harvest of Canadian salmon.

“ICES has made it very clear that there is no surplus for harvest of North American salmon in mixed population fisheries and that harvest of salmon should only occur when the health of all targeted populations is known based on scientific assessment,” said Taylor.   “Any harvest should only take place in rivers where salmon populations are known to be exceeding their minimum conservation limits.” 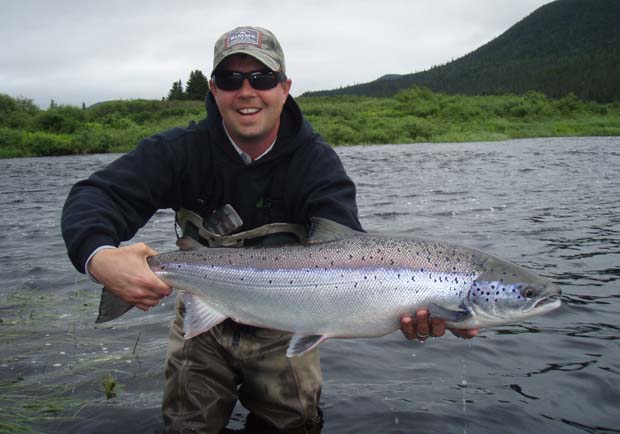 Fly Life Magazine.com contributor Brooks Paternotte with a hefty adult Atlantic salmon. Photo by Maurice Keats, guide at the St. Paul’s a River Salmon Club in Quebec, summer of 2014. One of 230 fish caught and live released that week by seven rods.

“We would like to see the Greenland fishery limited to a subsistence fishery, which historically has been about 20 tonnes,” said Taylor.  “Greenland needs to implement better reporting, monitoring and control of its salmon fishery to which they have indicated they are open to considering.  But at the same time, they have indicated that they want to maintain a factory fishery and an uncapped subsistence fishery.  In light of the very low levels of North American salmon stocks, this is simply unacceptable.”

Fisheries and Oceans Minister Gail Shea made it clear in her announcement of the Ministerial Advisory Committee last December that one of the main areas of focus was recommending a strategy to address international, unsustainable fishing.  ASF welcomes this commitment by the Minister.

However, to practice precautionary management that will conserve our Atlantic salmon and set an example for Greenland, Canada must take further measures to decrease its own harvest of salmon. There should be zero harvest from populations that are not known to be surpassing minimum conservation limits.  While Canada has reduced its harvest from 136 tonnes in 2013 to 105.6 tonnes in 2014, Canada needs to do more to ensure that our First Nations and recreational fisheries are following precautionary management principles and the best scientific advice.

“The NASCO meetings in Goose Bay are an opportunity for Canada to demonstrate to the world that we are serious about conserving and restoring our wild Atlantic salmon stocks,” said Taylor.  “We have a chance to build upon the progress already achieved by the Ministerial Advisory Committee.”

The Atlantic Salmon Federation is dedicated to the conservation, protection and restoration of wild Atlantic salmon and the ecosystems on which their well-being and survival depend.  ASF has a network of seven regional councils (New Brunswick, Nova Scotia, Newfoundland and Labrador, Prince Edward Island, Quebec, Maine and Western New England).  The regional councils cover the freshwater range of the Atlantic salmon in Canada and the United States.