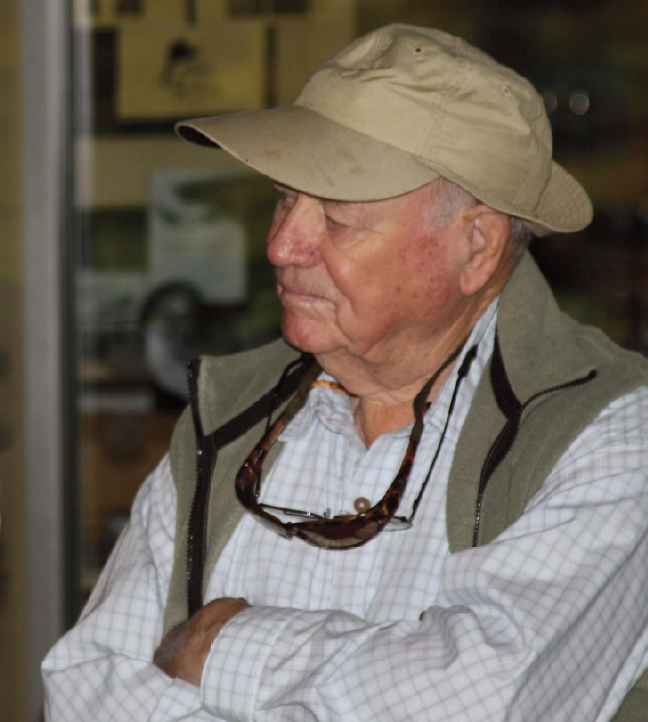 Lefty Kreh is to fly-fishing what James Naismith was to basketball and, perhaps, what Elvis was to rock ‘n’ roll.
Not only is the now 87-year-old Kreh credited with helping invent the sport in the late 1940s, he later popularized it by writing more than 30 books as well as writing an outdoors column, including an 18-year stint at The Baltimore Sun.

On Monday, Kreh will be honored — begrudgingly — when a seven-mile trail at Gunpowder Falls State Park will be named in his honor by the Maryland Department of Natural Resources. Kreh, who is still very active in the sport, recently talked with The Sun about his career and his sport. 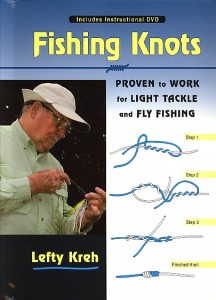 One of more than 30 books by Kreh

In those days, Frederick had about 17,000 people and the Monocacy River was superb small-mouth stream, the Potomac was choke-full of fish and you could actually hunt quail on the outskirts of Frederick. … I used to go hunting and fishing with the editor of the Frederick News-Post and he said you ought to write an outdoors column. At that time, The Baltimore Sun was one of the few newspapers that had an outdoors column. There were only four hunting and fishing magazines in the country. You had 13 million servicemen coming home from the war who loved to hunt and fish. I was always one to write about how to do it, where to do it, when to do it. They just gobbled the thing up. … One of the things that I did to help me promote fly-fishing, I recognized back in the ’50s working at Fort Derrick doing some outdoor writing on the side, most outdoors writers really knew their own region well but didn’t know what was in South Florida or in Manitoba. I was the very first one to go around the country giving clinics and banquets. I didn’t have the money to get to Montana, but I would work with a club out there and they would pay me to come out and I would fish with one or two of the local experts – that way I got to fish all over the world on somebody else’s money but in the process I would spread the word, the gospel about fly-fishing.

What was the motivation for popularizing fly-fishing?

Joe Brooks used to live in Baltimore; he was part of the Brooks Insurance firm. I got a reputation for being sort of a hot-dog fisherman. This was almost prior to spinning. That was just coming into the country. He asked me if I would take him fishing. We went up to just below Harper’s Ferry and he had a fly rod. That was the first time I ever saw a fly rod. I didn’t know anybody in Frederick County (Maryland) that actually fly-fished. We went back down to Tochterman’s and he selected a rod and a reel and took me over to Herring Run Park and gave me a fly-casting lesson. I got hooked on it. I mainly fished for small-mouth bass. I knew that the longer you could swim the fly through the water, the more opportunity you had for catching fish. The old method where your arm came up to your ear and back down again, which was developed in the 14th century, that didn’t work as well [with a fly rod]. I did an article for Outdoor Life, they got all kinds of criticism for it because it was against tradition.That’s where the modern method of fly-casting started. In 1964, Joe Brooks got me a job at The Miami Herald running the largest fishing tournament in the world and I was exposed to all the saltwater fishing down there. I was getting so many letters about how you fish for this or that, I wrote a book called “Fly Fishing in Saltwater”. A lot of reviewers called it the “Koran of saltwater fly-fishing.” In 1965, three different groups were organized to promote fly-fishing. These were all independent of each other. Along with Mark Sosin, we established the world record for fly-fishing that stood for 16 years.

How difficult was it to fly-fish in the early days, before you invented the Deceiver Fly? Was it like playing golf with gutta-percha balls and hickory-shafted clubs?

Flies that are used underwater that imitate baitfish are called streamer flies. Basically, the streamer flies before I developed the Deceiver were some kind of chenille on a hook with some feathers. That stuff would underwrap. It didn’t look like a baitfish anyway. By going to a deceiver and making a fly that didn’t underwrap, it was easier to go under the water, it was easier to cast. Aerodynamically it was good. You could make it short, medium or long. You could make it from different kinds of materials. I kind of broke the mold on a new way of tying flies. That and the Clouser Minnow are two of the most imitated flies in fishing, even freshwater, today. I encouraged people to make variations. A lot of people put their names on it. I didn’t care about that. There are probably only a half a dozen or so new flies since the 1950s.

You talk about how plentiful the fishing was in Maryland during the 1950s. How does the fish population in Maryland now compare and has it been impacted by environmental issues?

We used to catch 40, 50, 60 bass a day on a fly rod. Not all of them were big, but at least you caught them. Today you’re lucky if you catch seven, eight or nine. We’ve lost almost all of the fish. I think it’s something like 70 percent of the male bass in the Potomac have female eggs in them. I think this is a canary-in-the-mine sort of thing where the EPA isn’t really up to speed on it. Sewage-treatment plants do not treat medicines. Any excess medicines that go through the sewage systems end up in our waterways. When you compound that, every town from Cumberland south is putting their medicines through the sewage systems, it’s affected male bass to the point where they’re having female eggs, then we’ve got a problem. The other big problem is that Frederick is the second-largest city in Maryland and Frederick County is one of the most populated counties and the water table has dropped so low that the Monocacy River, where we used to fish, is almost dried up. Many of the streams where we used to go fishing don’t even exist. You’ve got a multitude of problems and unfortunately the Department of Natural Resources really doesn’t have much power. County commissioners are easily influenced by developers and manufacturers. They are where the leak starts.

Is modern fly-fishing as pure a sport as it once was? 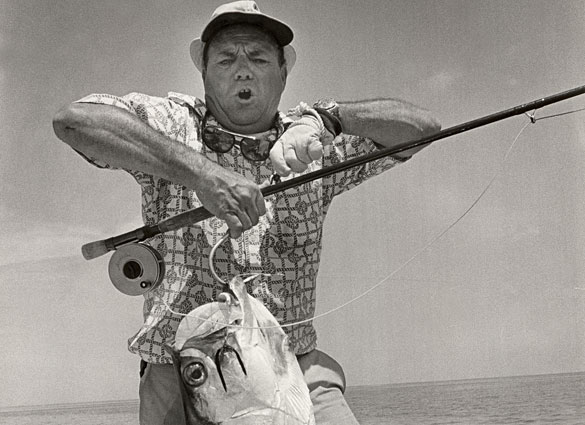 Lefty in his Miami Herald Days

It’s expanded. When I began fly-fishing, there was no one to go to. You learned on your own. After those organizations were formed, they formed chapters. Then you had books come out. There are probably more books written on fly-fishing than any other sport. Then you had the VCRs and the DVDs. You have a tremendous amount of dispensing of information on how to tie flies, how to fish, how to cast. I have done eight or nine videos myself. Not only do you have more people fly-fishing, but you have more knowledge available. With the equipment, everything is vastly improved compared to what it used to be.

Speaking of TV shows devoted to fishing, do you think fishing can become a popular spectator sport?

No, because the money’s not in it. They’re catering to younger people. Even the fishing and hunting shows we’ve had have declined. They’re trying to sell the ads to young people, but the truth is, most of the people who hunt and fish are over 40 years of age, an awful lot of over 50. The money is being spent on ads in the fishing magazines, but the younger generation might buy one or two fly rods, but they’re not going to buy a lot of them. Fly-fishing has never been tournament-oriented. When I ran the tournament down in Miami, I had so many unpleasant experiences with people cheating or being unethical, we actually banned the presidents of corporations and the janitors of corporations. Competition is almost foreign to fly-fishing. Most fly fisherman enjoy helping each other. In bass fishing, competition is very successful because you have a different culture. They enjoy competing with each other. My own personal philosophy is that when you compete with someone, you become their competitor. If you help people, you become their friends. Almost all fly fishermen I know do not sanction tournament-type fishing.

Do you have any particular highlight or achievement in your career that stands out?

I have never felt especially bright anyway. I always tell young writers, ‘Don’t get puffed up about your success — your car mechanic is smarter than you. You cannot even fix your own automobile.’ The thing that they’re doing on Monday, I actually opposed that. First they were going to name a lake up in Frederick County after me. I fought that tooth and nail. Then they made percolation tests and they found out that the soil of the lake bed wouldn’t hold the rake well. A stream that used to be so deep you couldn’t wade it is now a trickle. Then they were going to name that lake after me and I said, ‘Heck, I am going to get a lawyer.’ So they backed off on that. I told them I don’t want them to name anything after me. I ain’t got a high opinion of myself.

If not the name on a dried-up lake, what do you want your legacy to be?

I know my inabilities, so I know that I’m not that impressed with me. I just hope people enjoy what I did.