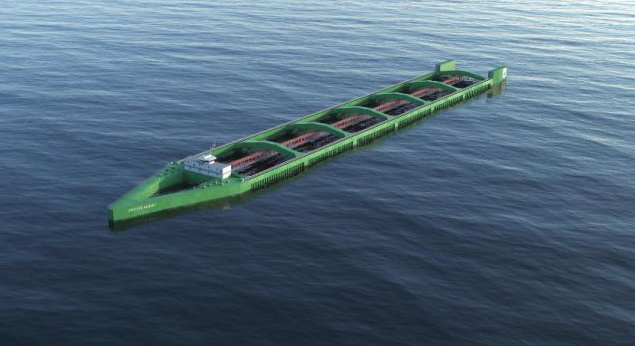 [dropcap]I[/dropcap]t could be the start of a sustainable revolution for the Norwegian salmon farming industry following the design of an aquaculture ship that will move salmon farming further offshore where sea lice and waste build up will no longer be serious problems.

In conjunction with Nordlaks, NSK Ship Design has designed the ship known as Havfarm (Ocean Farm) which measures 430 metres in length and 54 metres wide.
The ship is designed to be anchored to the seafloor using the offshore industry’s technological solutions which can withstand very tough conditions at sea. If the project is completed as it has been designed, it will be the longest ship in the world.
One Havfarm will be able to contain 10,000 tons of salmon – over 2 million fish. For comparison, the Nordlaks salmon slaughterhouse at Børøya produces 70,000 tons a year.

The facilities will be able to withstand a significant wave height of ten metres, and can be raised by four metres during inclement weather.
The ocean farm itself will extend ten metres below sea level. The farm will be constructed as a steel frame with six cages measuring 50 by 50 metres on the surface and aquaculture nets going to a depth of 60 metres.