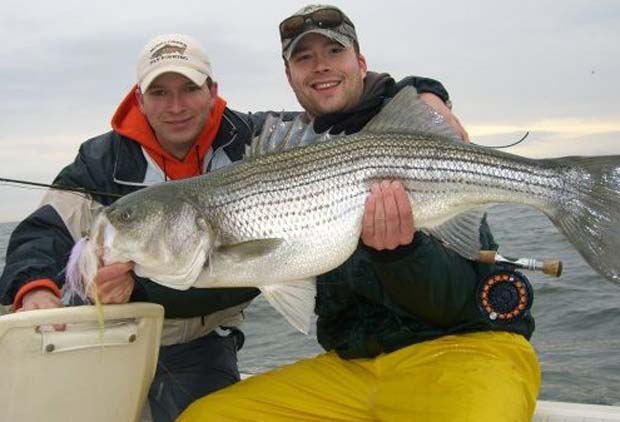 Menhaden, the most important fish in the ocean, has had its overall biomass shrink; considerably

Menhaden provide a critically important food source for everything from humpback whales, osprey, stripers and everything shoreward in between.

Why, responsible folks ask, is it being over harvested and why is it sent overseas as a dog food additive, fertilizer and worse, aquaculture feed?

Here’s what a concerned fishing guidec has to say about menhaden. He speaks for all guides up and down the Atlantic and Gulf coasts, as well as, almost every commercial fisher. 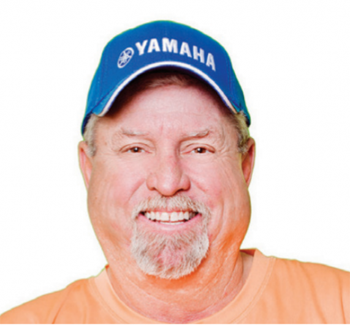 [dropcap]I[/dropcap] grew up on the waters of Northeast Florida, and for nearly 20 years I’ve run a fulltime charter fishing service out of Fernandina Beach on Amelia Island. Every time I idle by the old pogy plant that once pressed a species of fish called menhaden into oil by the tons, I wonder what the fishermen of years pass saw in terms of abundance of this vitally important forage fish. During my decades on the water, I’ve watched the schools of “pogies,” as the species is called in the South, shrink to the point that often even professionals like me have to burn a lot of fuel looking for them. Talk to any good guide from the Carolinas down into South Florida with as many decades on the water and they’ll tell you the same story.

When I’ve spoken with experts about the abundance that once was, and the additional declines that I’ve witnessed, they tell me that I have good cause to be alarmed. Did you know that of all the forage fish species, menhaden, which are slow and easy for predators to catch, offer our priceless fish, as well as ospreys, dolphins and whales, the best bang for their predatory energy, in terms of nutritious fatty acids?

Menhaden are arguably the most important fish in the ocean. Almost every recreationally and commercially valuable predator fish depends upon menhaden, especially some of our most popular species. These include the fish we catch in the marshes and along the beach, especially spotted seatrout and red drum. More migratory species such as tarpon, sharks and king mackerel are so dependent on pogies that they follow the dwindling schools along the coast. Even species that spend all of most of their lives offshore depend on menhaden, including many species of tuna. They all need the nutrition that menhaden provide in order to grow, to amass enough energy for their migrations, and to produce egg yolks with the fat content necessary to ensure that enough of their eggs become swimming offspring. 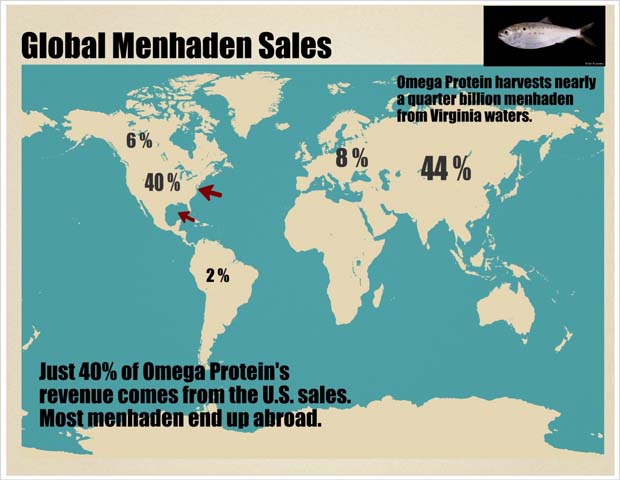 A few years ago, a coalition of recreational anglers, charter operators, commercial fishermen and environmentalists got my hopes up about rebuilding a healthy menhaden population all along the Eastern Seaboard. In 2012, much to my surprise, they convinced the Atlantic States Marine Fisheries Commission (ASFMC) to do something that the management body had long resisted: They sharply reduced the menhaden harvest.

The coalition faced tremendous opposition from one politically powerful Virginia-based company, Omega Protein, the entity primarily culpable for fishing menhaden down to dangerously low numbers, and for shrinking the species’ range to its epicenter in the Mid Atlantic. Omega Protein presses the fish for its oil, which goes into things such as makeup or fishmeal. The latter is often exported to foreign fish-farming operations. 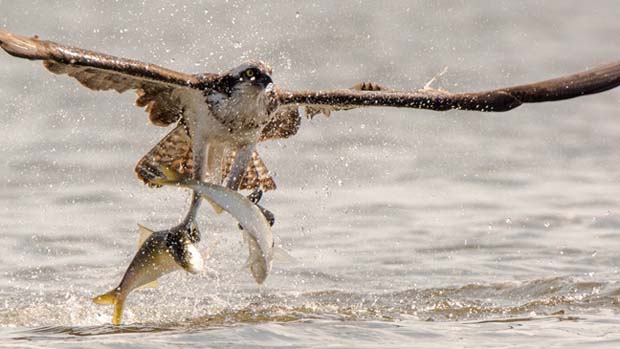 Somehow, the good guys convinced the ASMFC to cut the harvest by 25 percent. A recent stock assessment shows that as a result, the coast-wide Atlantic menhaden biomass—the combined weight of all the fish in the ocean—has increased. But, the actual number of fish remains at dangerously low levels. No one in the northern Mid Atlantic, New England or in the South has benefited, since what progress that’s been made has not been enough to restore menhaden throughout its range.

Now, the ASFMC is at a crossroads in menhaden management 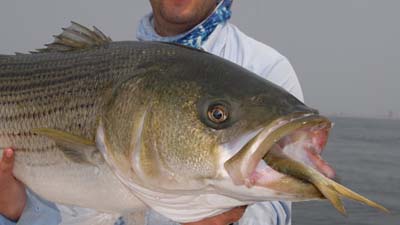 Bass has last meal of a menhaden. Image credit Pew.

They’re being pushed by the industrial interests to allow more harvest, without any valid scientific evidence to suggest that such a move would do anything but starve our fish, sea birds and fish-eating mammals.

Here’s a better idea, and I assure you a much more popular one: Set the limit after you take into account what the predators need, after you take into account the nutritional requirements of the species that drive coastal tourism, recreational fishing and the seafood industry all along the Eastern Seaboard. We want our pogies back, in healthy numbers. The ASFMC took historic action in 2012, and it’s time for those decision makers to recognize the importance of menhaden to ecosystems from South Florida to Maine.

Capt. Russell Tharin is a veteran charter fishing captain and is the Fishing Specialist at West Marine located in the St. Johns Town Center Jacksonville, Florida.

More about the importance of baitfish . . .