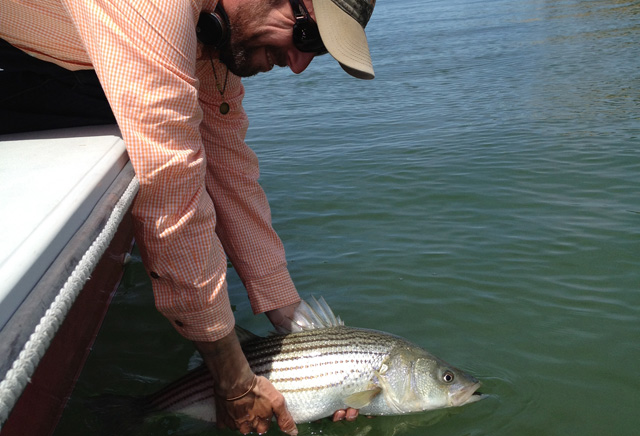 [dropcap]A[/dropcap]t its annual meeting on October 29, 2013, the Atlantic States Marine Fisheries Commission (ASMFC) adopted a new stock assessment. In a nutshell, the assessment shows that while the spawning stock biomass is not yet critically low (as of the end of 2012), we have reached the overfished threshold and are well below the target level set in 1993 when the stock was first thought to be recovered from the crash of the 1970’s. The overfished threshold is a point at which the spawning stock biomass would slip below the level it was at when the successful 1993 year class was spawned, and is calculated to provide what is thought to be the minimum acceptable spawning stock – one with some margin of error that could produce the much larger year classes needed to support a robust recreational fishery. The recent Young of the Year spawning numbers are very disturbing.

The current level of fishing mortality, while below the threshold in 2012, is now forecast to be greater than the prescribed target, which means that too many fish are being killed by fishermen to maintain the target spawning stock biomass.

Striped bass spawning success varies from year to year. But the recent Young of the Year (YOY) spawning numbers are very disturbing. The 2013 YOY count of striped bass spawned in Maryland’s portion of the Chesapeake Bay was below the average of the last 20 years (see  graphic below). A year earlier, in 2012, the YOY count was the worst ever. The Hudson River, which is the second largest producer of baby stripers on the Atlantic Coast, has now had three years of poor spawning success. Striped bass are the major predators in their niche, and nature designed them to grow large and to spawn over a long lifetime. Some biologists are greatly concerned that the management concept of focusing harvest on the larger, more mature fish in the population is destabilizing and could lead to long-term spawning disaster.