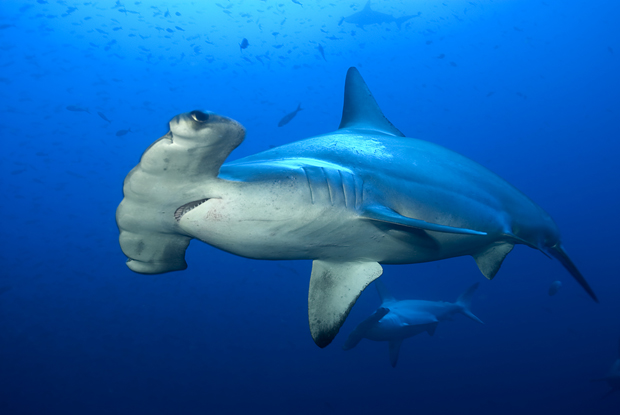 A new study found that 85 fish species threatened with extinction are targeted by trophy fishermen for world records. The study, led by scientists at the University of Miami (UM) Abess Center for Ecosystem Science and Policy offers the first analysis of the conservation status of trophy fish.

The study analyzed the conservation status of fish species with world size records issued in 2011 by the International Game Fish Association (IGFA). The results showed that of the 1,222 fishes with IGFA world records, 85 (6.95%) are listed as threatened with extinction by the IUCN Red List of Threatened Species, an international assessment of a species’ conservation status. In addition, 687 (56%) of commonly targeted trophy fish have not been evaluated by the IUCN Red List. The 85 threatened species the IGFA has issued records for includes great hammerhead sharks, bluefin tuna, and goliath grouper.

The great hammerhead (Sphyrna mokarran) is the largest species of hammerhead shark with a maximum length of 20-feet. The great hammerhead can be distinguished from other hammerheads by the shape of its “hammer” (called the “cephalofoil”), which is wide with an almost straight front margin, and by its tall, sickle-shaped first dorsal fin. IGFA ALL Tackle record is 1280-pounds.

It is well known by scientists that the largest fish are the most reproductively fit of a species and therefore their existence has the potential to positively or negatively impact population size. The study’s authors suggests that the IGFA set rules and promote new technology to minimize the death of at-risk threatened species during trophy fishing tournaments.

“Recreational fishing for food or fun has a long history, but it’s time to reconsider trophy fishing for endangered species. Perhaps the path to a solution is to stop issuing world records that indirectly create a demand for IUCN Red List threatened species,” said lead author and Ph.D. student David Shiffman. “This would still allow fisherman to target more than 90% of the species that the institution issues records for, and would reduce pressure on the most fecund members of threatened species.”

“Trophy fishing for official records removes the largest, oldest and most reproductive individuals, which can have a disproportionate negative impact on a population, even when relatively few individuals are taken,” said co-author and UM Research Assistant Professor Neil Hammerschlag. “The IGFA has a long history of supporting responsible fishing practices, so reducing incentives to capture the most ecologically important and threatened fish is consistent with the values and history of this conservation-minded organization.”

The paper, titled “Trophy fishing for species threatened with extinction: a way forward building on a history of conservation,” was published on Aug. 8 in the online edition of the journal Marine Policy.

A prepared response to the Marine Policy position has been prepared by Jason Schratweiser, IGFA Conservation Director . . .