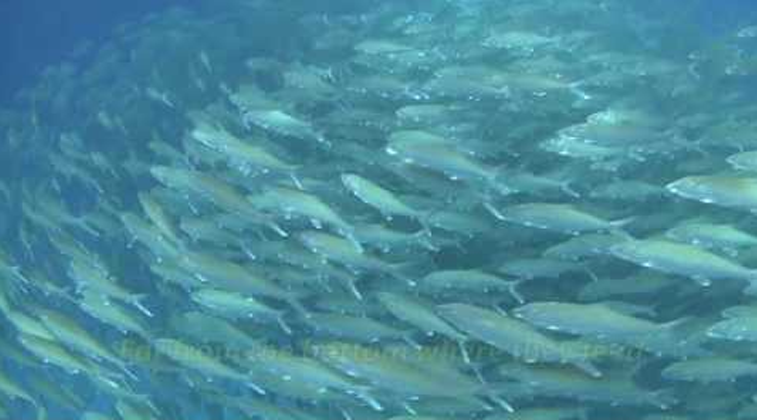 [dropcap]B[/dropcap]onefish, also called gray ghosts, are among the most elusive and highly prized fishes sought by recreational anglers in the Florida Keys, Bahamas and similar tropical habitats around the world. Bonefish support a fishery worth hundreds of millions of dollars annually, but this fishery is threatened in many areas by habitat loss and degradation, and by overfishing. Scientists are scrambling to identify and protect critical habitats and identify other ways to conserve this vital fishery.

A recent study of bonefish spawning behavior in the Bahamas brings to light new information that should aid bonefish conservation efforts. In meetings in the Bahamas Dec. 9, Aaron Adams, director of operations for Bonefish & Tarpon Trust (BTT) and research associate professor at Florida Institute of Technology, shared the results with the Bahamas Ministry of the Environment and conservation collaborators Bahamas National Trust and The Nature Conservancy. He and other marine scientists sponsored by BTT, the non-profit conservation group located at Florida Institute of Technology, recently tracked a school of more than 10,000 bonefish as they went through final stages of spawning in the Bahamas.

The scientists found that, starting in mid-afternoon, the school swirled like a tornado in water 30 feet deep (http://www.youtube.com/watch?v=5KMGm39zOqI). These fish, which normally live on the bottom, started rushing to the surface to gulp air. Bumping against each other in a pre-spawning behavior, the fish tried to avoid the sharks, barracuda and Cubera snappers stalking the school. As night fell, fish in the school quickened their pace and headed for the drop-off at the edge of the reef, where water depths exceed 1,000 feet.

Using special tags they had inserted into the bonefish on a previous day, the team tracked the school as it quickly descended past 160 feet and drifted about a quarter mile from the edge of the drop-off. These shallow water fish were now suspended in the deep ocean, in water thousands of feet deep. After an hour in the deep, the bonefish suddenly rushed upward, releasing their eggs and sperm as they reached 80 feet below the surface.

The spawn over, the fish quickly moved back into shallow water, and the school was gone by the next morning, headed home. Ongoing tracking of bonefish is also revealing exciting new information – that bonefish are migrating 70 miles or more to get to this spawning location, and then reversing course to head home. At the spawning site, they left behind millions of fertilized eggs drifting in the water and beginning a two-month-long larval stage that will ideally result in settlement of baby bonefish somewhere in the Bahamas to begin the cycle over again.

Because bonefish typically live in shallow water in a small home range nearly all of the year, conservation strategies have focused only on shallow waters. However, previous research by Andy Danylchuk, also involved in this study, showed that bonefish migrate from the shallow flats to gather in large schools in discrete spawning regions, and then offshore to very deep water to spawn.

But this new research effort led by Adams shows that thousands of bonefish can be involved simultaneously in spawning aggregations, documents new spawning-associated behaviors, identifies distinct staging and spawning locations, documents predation by snappers and groupers (in addition to previously known predation by sharks and barracuda), and demonstrates long-distance spawning migrations.

These new observations help define conservation strategies required to maintain this vital fishery. Habitat losses from a variety of causes—degradation of shallow flats and nursery areas, disruption of water flow patterns by construction of roadways and causeways, and coastal water pollution—have been implicated in bonefish population declines in many areas. The current research defines another critical need for conservation: protection of spawning aggregations. These massive aggregations of spawning bonefish are vulnerable to destruction of the aggregation habitats by development and ship anchoring, as well as by harvest. Bonefish spawning migration requires a greatly expanded conservation outlook that links critical deep and shallow habitats.

During a recent expedition to The Bahamas, Dr. Andy Danylchuk (UMass Amherst), Dr. Aaron Adams (Bonefish & Tarpon Trust/Florida Institute of Technology), Dr. Jon Shenker (Florida Institute of Technology), and Zack Jud (Florida International University) reconfirmed that bonefish form massive spawning aggregations at very specific locations during specific lunar days. Using manual tracking and depth sensors, they also documented that bonefish use depths of greater than 160 feet (50 m) when spawning, after which they return quickly to shallow water. Collectively, this work will help identify sites throughout The Bahamas and elsewhere in Florida and the Caribbean where bonefish spawn and that need protection from habitat disturbance and overfishing. Stay tuned for more epic footage!