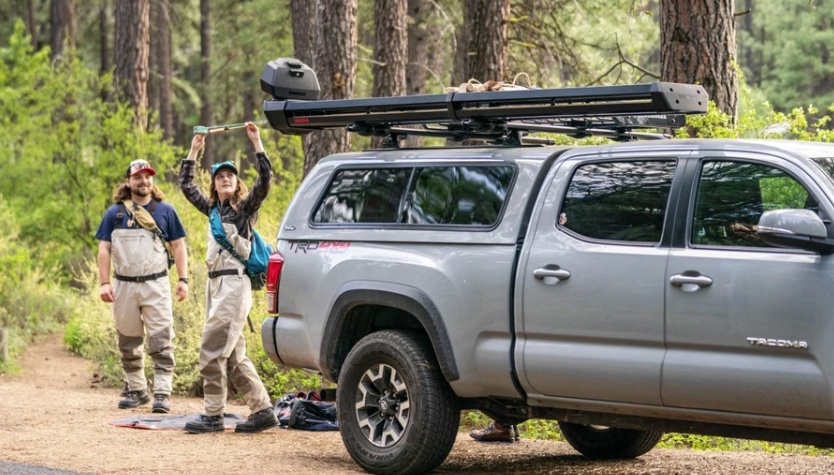 No need for Bushcraft knot knowledge, but a tie-down knot is a must for fly fishers

A few weeks ago with a cool break in the weather, Angie and I headed north to her family homestead on the NC border to fly fish cooler trouts

We were driving on Georgia I-575 N when we got to watch a pair of kayaks go airborne from their roost on a cargo length RV roof. The windy day, and an 18 wheeler with the pedal to the metal, going at least plus 75 mph, past the Edwards’ RV and it prematurely launched their two rooftop kayaks.

Both kayaks reached heights of at least a dozen feet above following traffic, which included us. They spiraled as if footballs before getting blown east and onto the berm where they tumbled harmlessly to earth – settling in a ditch about 50 yards apart.

Angie insisted we assist so, I pulled off, stopped, and backed up to a few feet in front of the Edwards’ RV. After introductions and gathering up the remarkably intact kayaks, we assessed why they had come loose from their tie-downs, which was poor knotage.

We found out that the kayaks were less than 25 minutes old – bought at Cabela’s not more than 12 miles away. And with an assist from the salesperson, tied atop the RV to a sturdy solar rack system. We never found the rope that had secured the kayaks.

Angie volunteered my 550 paracord, which is at least three times the cost of nylon cord. I said nothing and tied off the kayaks and had the Edwards’ on the road again in about 40 minutes. Unbeknownst to me, Angie had given them her business card and explained the paracord versus nylon cord cost.

More critical was teaching Edwards boys how to tie a knot needed for holding down objects like their kayaks. Several “Trucker Knots” tie things down safely and I showed them how to tie the simple version.

The Truckers Hitch is an excellent option as is the Bowline Knot, but I’m partial to the Alpine Knot, also called Alpine Loop Knot and Alpine Butterfly Knot. No matter its name – it’s easy to tie, and it’s sister knot, the Alpine Bend, has obvious uses while flying fishing. Check both out.

I didn’t show the Edwards boys the latter – the ‘Alpines’ – just the the half-hitches to anchor to secure either the Truckers or Alpine knots.

The Edwards boys sent me a $50 gift card at Whole Foods – thanks Billy and Tom.