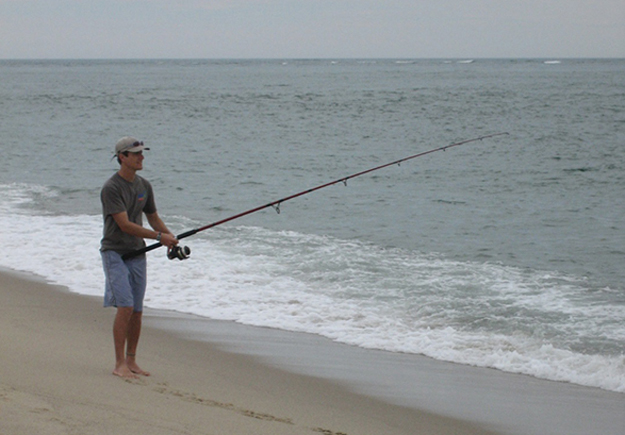 Ocean Science: Where are the fish going?

Warming oceans have fish on the move, and one man is in hot pursuit

[dropcap]“W[/dropcap]e’re seeing such clear impacts” from warming, says Malin Pinsky, who adds that fishery managers if they act fast, can help protect marine resources. “This is the moment we can make a difference. The decisions we make now will play out for decades and centuries.”

Recently, he’s seen lobsters nearly disappear from Long Island Sound, driven out by disease and a series of warm summers. The delicacies are thriving in the cooler Gulf of Maine, but that may be temporary: Water Temperatures there are rising faster than anywhere else in the North Atlantic. Pinsky has also observed Black sea bass, traditionally plentiful off Virginia, start to relocate to the Gulf of Maine and the waters off the New Jersey coast. And out west, Pacific halibut and arrowtooth flounder in the eastern Bering Sea off Alaska have shifted north toward the Arctic.

“It’s not one species in one place or a few species in a limited area,” Pinsky says of the moving populations. “It’s hundreds of species in North America shifting toward cooler waters, and that’s significant.”

As species move, will fishermen relocate their businesses to follow?

The changes pose major questions for fishermen and fishery managers. As species move, will fishermen relocate their businesses to follow? How do fishery managers set rules when fish have moved to new areas where they may be more susceptible to overfishing? And will species such as lionfish, which are invasive in the Atlantic Ocean and thrive in warm Southern waters, suddenly appear in force farther north along the Atlantic coast? Even more confounding is the effect of temperature changes on species such as corals that have difficulty relocating to a more suitable place.

Some scientists now suspect that the New England cod declined drastically over the past three decades due to—among other factors such as habitat and food loss—a double whammy of overfishing and warming waters that contributed to reduced spawning and fewer fish surviving to adulthood. Fishery managers, who at the time didn’t account for temperature effects on the species, failed to reduce catch limits in time to help cod weather the changes in their habitat.

“Ocean temperature is something we’ve largely ignored in fisheries management for a long time, to our detriment,” says Pinsky, who explains that some fish cannot reproduce or even survive if temperatures don’t suit them.

“Fishermen who are out there day in and day out tend to notice, long before anyone else, changes in the fish or where they’re found,” Pinsky says. “We often listen to the fishermen and then complement what they say with data and research.” 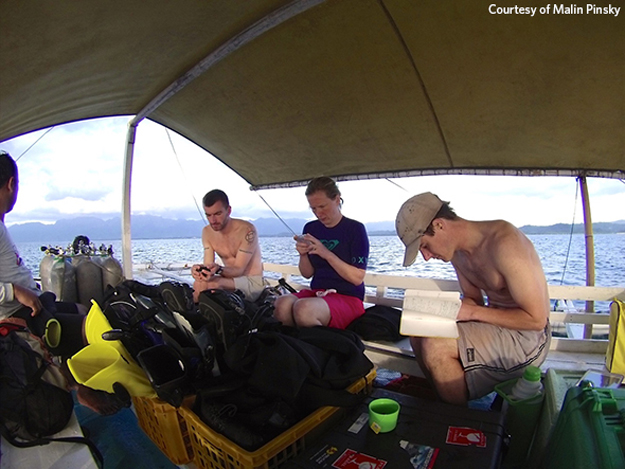 Rutgers University researchers Patrick Flanagan, Michelle Stuart, and Malin Pinsky (left to right) check equipment and prepare for a dive to study reef fish off the island of Leyte in the central Philippines in 2015. This research helps the team understand how fish populations go extinct and how they colonize new territory—key processes driving fish to cooler waters in North America and around the world.

Recognizing the value of that information, Pinsky collaborated with staff from the National Oceanic and Atmospheric Administration’s National Marine Fisheries Service to create a public database called OceanAdapt, which scientists and fishery managers can use to track changes in species’ locations. Many fishery projects and agencies, including NOAA Fisheries, have already used data from OceanAdapt.

And Pinsky anticipates that OceanAdapt will come in even more handy as some fishery councils dive deeper into the issue of warming seas when setting fishing rules. Already, the Mid-Atlantic Fishery Management Council, which governs fishing in federal waters from New York to North Carolina, has adopted guidelines to consider climate change when setting fishing rules. The South Atlantic Fishery Management Council, which manages fishing in federal waters from North Carolina to east Florida, could soon follow suit. Pinsky and Rutgers colleague James Morley recently studied fish movements there.

With scientists projecting a 1- to 3-degree Celsius increase in sea surface temperatures in the South Atlantic by 2080, Pinsky expects fish to make some big moves. Warmer winters are likely to bring bigger populations of white and pink shrimp, spadefish, Spanish mackerel, bonnethead shark, and Atlantic sharpnose shark to the region. As a result, some northern species could be forced out of their current habitat as new species move in and compete for food.

Fishery managers, Pinsky says, are “chasing a moving target. It’s going to take new science and new approaches to managing these fish populations effectively.” Succeeding at that, he adds, is vital to the future of the seafood supply and vibrant coastal communities.

“We see such clear impacts” from warming, says Pinsky, who adds that fishery managers, if they act fast, can help protect marine resources. “This is the moment we can make a difference. The decisions we make now will play out for decades and centuries.”