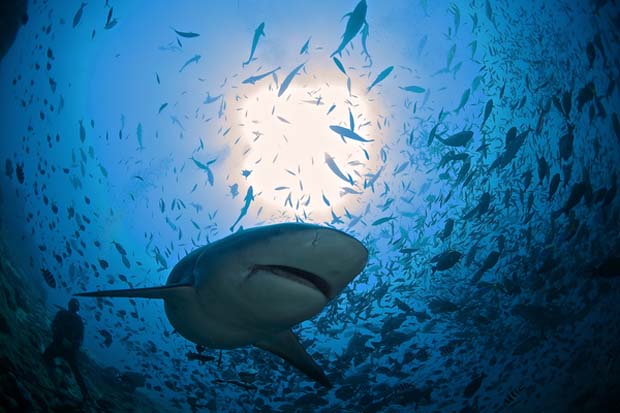 Of Interest: 5 things you didn’t know sharks do for you

[dropcap]I[/dropcap]t’s always struck me as odd how terrified many people are of sharks. It’s one thing if you’re a surfer or fisherman, but why would people living thousands of miles from the coast list the marine predators among their greatest fears? Yet the recent explosive popularity of “Sharknado” — as well as the annual success of Shark Week, which began last night on the Discovery Channel — has continued to prove that humans are both fascinated by and petrified of these creatures.

In reality, you are more likely to be killed by your toaster than a shark … and if sharks were to disappear, it would be bad news for all of us. Here are just a few of the reasons why.

Many shark species are apex predators, meaning they reside at the top of the food web. These sharks keep populations of the species they prey on in check, weeding out the weak and sick animals to keep the overall population healthy. Their disappearance can set off a chain reaction throughout the ocean — and even impact people on shore.

For example, a study found that large sharks have declined dramatically in the northwest Atlantic since the mid-1980s. The presence of fewer sharks led to a population explosion of species like cownose rays, which in turn depleted the region’s bay scallops. This was an important factor in the collapse of North Carolina’s century-old bay scallop fishing industry.

2.     Sharks could hold cures for diseases.

It has puzzled researchers for years: Why don’t sharks get sick? (They do, of course, but not as often as other species.) Shark tissue appears to have anticoagulant and antibacterial properties. Scientists are studying it in hopes of finding treatments for a number of medical conditions, including viruses, cystic fibrosis and some forms of cancer.

Carbon is a critical element in the cycle of life; as you might remember from high school biology class, all living things contain carbon.

By feeding on dead matter that collects on the seafloor, scavengers like deep-sea sharks, hagfish and starfish not only keep themselves alive, they also help to move carbon through the ocean.

In addition, research has found that, like trees, large marine animals such as whales and sharks sequester and store large amounts of carbon in their bodies. When they die naturally, they sink to the seafloor where they are eaten by scavengers, as mentioned above. However, when they are hunted by humans, they are removed from the ocean, disrupting the carbon cycle.