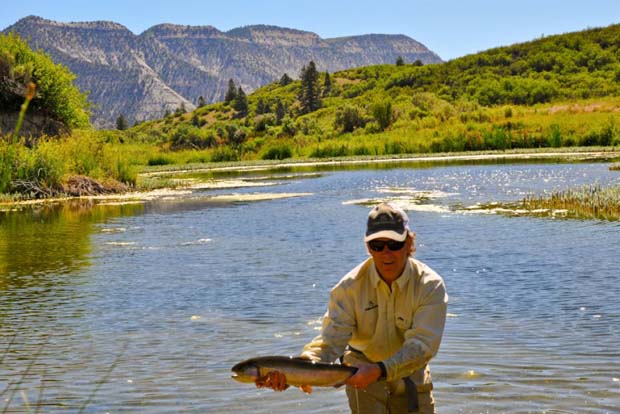 The Lease. The lure and limits of private land

[dropcap]S[/dropcap]Some friends and I lease a quarter-mile of a mountain trout stream that runs across a willow-choked basin at 8,500 feet. It’s not quite flat enough to be called a meadow stretch, but it’s flatter, wider and more meandering than the steep water in the canyons above and below, and the view of the Continental Divide to the west is as corny as a stage set. The property is owned by a rustically fancy lodge that’s been in business continually for more than a hundred years. This place has been through several incarnations in that time, but it’s now an “events center” that makes its nut in the summer by hosting outdoor weddings with a 14,000-foot mountain as a backdrop.

The stream was leased for a few years by a local outfitter who guided there. In its natural state this water produces feral brown and brook trout not much longer than about 10 inches, but every spring the guy would dump in some big, fat hatchery rainbows for the clients. To his credit, he never actually claimed that these were “wild Rocky Mountain trout,” but he’d fess up only if asked, leaving the uninquisitive free to think whatever made them happy.

“If you were with an out-of-town guest, you could hook the biggest trout yourself while still appearing to generously give up the best water. If you were that kind of friend, that is.”

Then one year the outfitter dropped the lease, and my friend Doug took it over for a token fee that was about what it was worth as a trout stream but far less than they probably could have gotten for it. That’s because the woman who runs the lodge doesn’t care about the fishing one way or the other and would probably just let people fish through if it weren’t for the weddings. These are momentous occasions fraught with nerves and emotion by nature, and the picture-book setting has plenty of built-in drama of its own. At that elevation howling wind can come up suddenly—playing hell with hairdos and flower arrangements—and mountain storms can pounce in the time it takes to ask, “Was that thunder?” For that matter, it wouldn’t be impossible for an oblivious moose or curios bear to crash the ceremony, although I’ve never heard of that happening. Given those risks, the last thing you want is for the proceedings to be marred by something preventable, like a fisherman yelling, “Fuck!” when he misses a strike or being discovered by the mother of the bride as he’s peeing in the bushes. John Gierach’s latest book is All Fishermen Are Liars (Simon & Schuster). Click on the cover to read more.

So our deal is that we get the place cheap in return for keeping it posted. (There was a time when this could have been done with a handshake, but now everyone seems more comfortable when money changes hands.) Beyond that, we can fish it whenever we want as long as we never allow ourselves to be seen or heard by a member of a wedding party. It goes without saying that the short high-country fishing and wedding seasons coincide almost exactly.

From the bridge at the downstream end of the property there’s about an hour’s worth of careful pocket-water fishing up to the Rock Pool. There are some obvious feeding lies in here that almost always hold fish, and there’s the usual temptation to cherry pick, but we’ve learned to prospect and on a good day a trout or two will come out of spots where you don’t remember catching one before. There are a few places where the wading gets gnarly and we’d like to loop around on the bank, but the willows here are as wild and thick as the wedding venue is manicured and we’ve let whatever rough trails there were grow over.

The Rock Pool is a big, open, fishy run that two people can cast to at once, but we usually trade off strike-for-strike to make it last. The sweet spot here isn’t in the dark run against the big granite boulder where you’d expect it to be but at the top end of the tail-out. If you were with an out-of-town guest, you could hook the biggest trout yourself while still appearing to generously give up the best water. If you were that kind of friend, that is.

Above that is some riffly water with scattered shallow pockets that sometimes hold fish, and about midway up this stretch is where you come in sight of the footbridge that leads from the lodge building to the clearing across the stream where the weddings are held. This is where you stop to watch and listen. Usually it’s well-dressed people crossing the bridge that gives it away. (Guests and members of the wedding stroll; caterers and other functionaries scurry.) But it also could be voices, laughter, music, tinkling champagne glasses and so on. Not to sound like a steely-eyed mountain man or anything, but no one who knows the difference between natural sights and sounds and an episode of Downton Abbey could stumble into the middle of things from here without knowing it.

Of course, the easiest thing would be to take an extra five minutes to drive past the lodge to see if the parking lot is full, but we never do that. Maybe we just enjoy slinking into the underbrush like poachers.

If the stream is fishing well that day, we’ll go back to the pickup, drive around to the bridge at the top end of the property and get back in there. If it’s not fishing well, we’ll go somewhere else nearby or, if it’s late or a storm has blown up, just go home. But we usually drive to the top end anyway to see if the no-trespassing signs need replacing.

They don’t last forever. After too long in high-altitude summer sunlight and winter wind a sign will fade like an old photo, sending the message that someone cared about trespassing once but maybe not so much anymore. And sometimes people tear them down, either on general principles or so that if they’re caught fishing where they shouldn’t, they can say, “Well, there was no sign . . . .”

Rainbow trout (Oncorhynchus mykiss) are stocked in the Colorado high mountain stream in John Gierach’s story. The “native” trout are bookies and browns – limited to around 10-inches. This Thom Glace original was donated to the Virgina Fly Fishing Festival Auction. Click on image to see more of Glace’s work.

I was never one to tear down signs, but I did trespass here a few times way back before the outfitter and the wedding business at the lodge. I used to fish the public water upstream, and sometimes when I’d come back down at the end of the day, I’d see trout rising in the bend pool that’s visible from the bridge. I understood in a vague way that this was private property—or at least that the road was the eastern Forest Service boundary—but a narrow trail led down to the water and in those days there was no fence or sign. If I’d ever been yelled at, that’s what I’d have said: “Well, there was no sign . . . .” I guess it’s ironic that I had a hand in putting up the no-trespassing signs that are there now, but then life is funny that way.