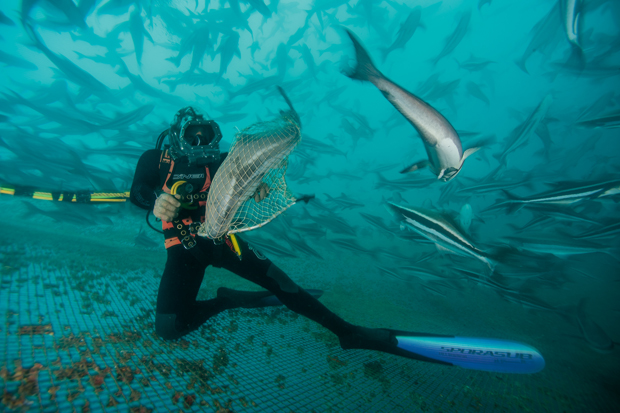 Of Interest: About that sale on salmon – hmmm?

Can the “Blue Revolution” solve the world’s food puzzle?

In a dark, dank warehouse in the Blue Ridge foothills of Virginia, Bill Martin picks up a bucket of brown pellets and slings them into a long concrete tank. Fat, white tilapia the size of dinner plates boil to the surface. Martin, president of Blue Ridge Aquaculture, one of the world’s largest indoor fish farms, smiles at the feeding frenzy

“[dropcap]T[/dropcap]his is St. Peter’s fish, the fish Jesus fed the multitudes,” he says, his raspy voice resonating like a preacher’s. Unlike Jesus, however, Martin does not give his fish away. Each day he sells 12,000 pounds of live tilapia to Asian markets from Washington, D.C., to Toronto, and he’s planning another farm on the West Coast. “My model is the poultry industry,” he says. “The difference is, our fish are perfectly happy.”

“How do you know they’re happy?” I ask, noting that the mat of tilapia in the tank looks thick enough for St. Peter to walk on.

“Generally they show they’re not happy by dying,” Martin says. “I haven’t lost a tank of fish yet.”

An industrial park in Appalachia may seem an odd place to grow a few million natives of the Nile. But industrial-scale fish farms are popping up everywhere these days. Aquaculture has expanded about 14-fold since 1980. In 2012 its global output, from silvery salmon to homely sea cucumbers only a Chinese cook could love, reached more than 70 million tons—exceeding beef production clearly for the first time and amounting to nearly half of all fish and shellfish consumed on Earth. Population growth, income growth, and seafood’s heart-healthy reputation are expected to drive up demand by 35 percent or more in just the next 20 years. With the global catch of wild fish stagnant, experts say virtually all of that new seafood will have to be farmed.

“There is no way we are going to get all of the protein we need out of wild fish,” says Rosamond Naylor, a food-policy expert at Stanford University who has researched aquaculture systems. “But people are very wary that we’re going to create another feedlot industry in the ocean. So they want it to be right from the start.”

Nature’s own water filters, giant Japanese scallops thrive on fish waste at an experimental farm off Canada’s Vancouver Island. The farm also uses sea cucumbers and kelp to consume excretions from nearby pens of native sablefish.

Tilapia pens in Laguna de Bay, the largest lake in the Philippines, are choked by an algal bloom they helped create. The overstocked lake produces large numbers of farmed fish, but excess nutrients trigger blooms that use up oxygen—and kill fish.

The new “blue revolution,” which has delivered cheap, vacuum-packed shrimp, salmon, and tilapia to grocery freezers, has brought with it many of the warts of agriculture on land: habitat destruction, water pollution, and food-safety scares. During the 1980s vast swaths of tropical mangroves were bulldozed to build farms that now produce a sizable portion of the world’s shrimp. Aquacultural pollution—a putrid cocktail of nitrogen, phosphorus, and dead fish—is now a widespread hazard in Asia, where 90 percent of farmed fish are located. To keep fish alive in densely stocked pens, some Asian farmers resort to antibiotics and pesticides that are banned for use in the United States, Europe, and Japan. The U.S. now imports 90 percent of its seafood—around 2 percent of which is inspected by the Food and Drug Administration. In 2006 and 2007 the FDA discovered numerous banned substances, including known or suspected carcinogens, in aquaculture shipments from Asia. A diver nets a ten-pound cobia for sampling before harvest in one of Open Blue’s dozen offshore pens. Able to hold hundreds of thousands of fish, but less densely stocked and better flushed than nearshore salmon pens, they produce little pollution. Cobia contain as much healthy fish oil as salmon do. A National Geographic image.

Nor have fish farms in other parts of the globe been free of problems. The modern salmon industry, which over the past three decades has plunked densely packed net pens full of Atlantic salmon into pristine fjords from Norway to Patagonia, has been plagued by parasites, pollution, and disease. Scottish salmon farms lost nearly 10 percent of their fish in 2012 to amoebic gill disease; in Chile infectious anemia has killed an estimated two billion dollars’ worth of salmon since 2007. A disease outbreak in 2011 virtually wiped out the shrimp industry in Mozambique.

The problem isn’t the ancient art of aquaculture per se; it’s the rapid intensification of it. Chinese farmers started raising carp in their rice fields at least 2,500 years ago. But with that country’s aquacultural output now at 42 million tons a year, fish pens line many rivers, lakes, and seashores. Farmers stock their ponds with fast-growing breeds of carp and tilapia and use concentrated fish feed to maximize their growth.