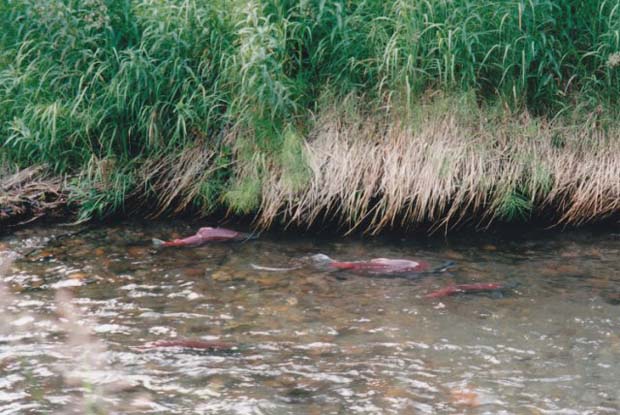 Of Interest: Alaskan salmon show how a river Is supposed to behave

[dropcap]S[/dropcap]ummer on Alaska’s Kenai Peninsula is a bad month to schedule meetings. When the sockeye salmon start running, all bets are off. As a native New Yorker recently arrived in Alaska, I learned this truth the hard way: My emails went unanswered, my calls unreturned.

Some days, when a pulse of sockeye in the Kenai River set online fishing forums abuzz, my office sat as empty as a fairground in February, coworkers vanished by an unspoken agreement — no “Gone Fishing” placard necessary. Photo by US Fish and Wildlife.

Then again, when the sockeye run, Alaskans don’t fish, they harvest. The head of every household can take 25 sockeye by dip net, plus another 10 fish for each family member. My own fishing privileges are still restricted to hook-and-line. But when my friend Brandon headed to the Kenai one July afternoon to net his winter meat, I tagged along to witness the action.

The fish counts had spiked that morning, and most of Anchorage, Homer, and Seward seemed to have gathered at the Kenai’s mouth. On the beach, a sprawling tent village flapped like prayer flags in the salt breeze gusting off Cook Inlet. A church group distributed hotdogs and bibles; scrums of brown-skinned kids wrestled over footballs; a Chinese family in matching lime-green hats cut fish in coordinated effort.

It all felt familiar: The eclectic crowd resembled a more purposeful version of the hordes at Coney Island. Brandon assembled his dip net, a long aluminum handle culminating in a hula hoop-size mesh bag, and splashed into the estuary. Up the beach, hundreds of dipnetters huddled like wading birds, nets extended into the incoming tide.

I couldn’t imagine enough fish to feed the masses, but I needn’t have worried; every few seconds, a dipnetter broke from the line and lurched toward the land, a sea-bright sockeye thrashing in the mesh. On shore, a waiting husband, wife, or child clobbered the fish with a club and heaved it into a cooler.

Other families had pressed ironing boards into service as makeshift fillet tables. They laid slabs of orange flesh onto ice and tossed heads and guts back into the Kenai, the next tide’s flotsam. The surf turned slimy with offal, and stacked salmon rose like firewood.

The scene was ritualistic and spectacular, unlike anything that exists on the East Coast I left behind, where salmon cycles have slipped, perhaps terminally, out of whack. The Connecticut River, in whose valley I lived for years, once supported waves of Atlantic salmon that sustained white and native settlements through New England winters. Two centuries of habitat destruction and overharvesting eradicated the fish, and $80 million of restoration has failed to bring them back. In 2012, 58 lonely salmon entered the Connecticut.

Not all the news from back East spells salmon doom. Last month, the Veazie Dam, a superannuated blockade on Maine’s Penobscot River, was finally demolished, a triumph that could boost runs from 2,000 fish per year to 20,000.

Yet success stories are the exception. Just 137 salmon returned to the dam-clogged Merrimack River in 2012, no more than when counts began 30 years ago. Scientists counted a meager five fish on Maine’s Kennebec River. And the federal government finally decided to abandon restoration on the Connecticut River after decades of failed attempts.

When salmon return in such low numbers that they can’t be eaten, they surrender their corner of the public consciousness. Eventually, empty rivers don’t seem so bad, or so unusual. That gradual forgetting isn’t unique to the East, either; wild runs throughout the Pacific Northwest have been so depressed by dams, irrigation withdrawals, and overzealous use of hatcheries that their apparent health is an illusion created by our lack of historical reference points.

The Kenai provides an antidote to such inaccurate baselines. The rivers here still brim with salmon, harvest rituals still attend the fish’s return, and citizens raise hell when the system goes awry — when Chinook runs mysteriously decline, as they have in recent years, or when projects like the Chuitna coal mine threaten to destroy vital streams.

Alaskans understand what their state still has. I’m reminded of what my home has lost. As the sky turned pink, Brandon trudged ashore with one final fish. A nickel-size hole in his waders had soaked him through, and his body jack-hammered with the cold, but he had 70-pounds of sockeye to provide ample comfort in winter. A smile moved his blue lips. This was how a river was supposed to behave.

Environmental coverage made possible in part by support from Patagonia. For information on Patagonia and its environmental efforts, click here to visit website […]. In affiliation with High Country News.