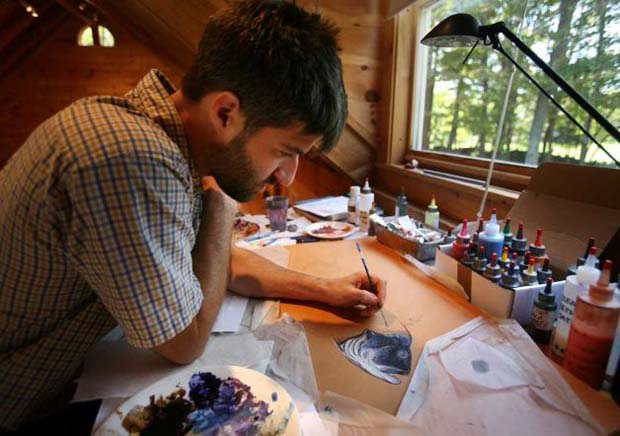 Of Interest: Artist, James Prosek, resumes an obsession with the fish of his youth

[dropcap]F[/dropcap]or a good chunk of my youth, this boy from New England was a Southerner at heart. I had fallen in love with largemouth-bass fishing and what is known as panfishing. The most renowned practitioners had Southern accents and called big fish hogs and bubbas. My heroes haunted ponds with cypress knees; their faces smiled from the pages of the Bass Pro Shops master catalog—which from when I was nine to twelve years old might as well have been my Bible. I knew every colorful lure by name—Jitterbugs, Tiny Torpedoes, Rat-L-Traps—and the names of all the pro bass fishermen, Dance, Lindner, Hannon, Martin. Around age twelve I started seeing my mom again after a three-year absence. She’d left my dad and disappeared. Mom would come by the house once a week to pick me up and spend an afternoon with me. By my request, our outings consisted of going to a bait and tackle store. She would patiently walk the store with me as I looked wide-eyed at all the lures and rods and reels and then, before we left, she would buy me a lure of my choice.

I fished local farm ponds and golf-course ponds, and in drinking-water reservoirs posted with NO TRESPASSING signs. I caught small-mouth and largemouth bass and those panfish—crappie, pumpkinseed sunfish, and bluegill sunfish. As I cast from grassy and rocky shores, I dreamed of one day owning a Ranger bass boat like the pros used, with a carpeted floor and compartments to hold all my tackle boxes. Plastic lures and baits and jars of pork rinds would be scattered all about the deck. And this held as a vision, a salvation even, until slowly but surely my love of trout and fly fishing grew to such an extreme obsession that it pushed all that stuff to the side.

But that part of me that wanted to catch big bass and panfish (a bass over eight pounds or a bluegill over one pound, thresholds for any self-respecting angler) never really left my soul.

Last Spring I was in Raleigh, painting several murals as part of a survey of my works at the North Carolina Museum of Art. At some point it occurred to me that I was in the heartland for the warm-water species I loved as a child. And damn if that bass-and-bluegill-loving side of me didn’t come raging out. One night in my hotel room I entered the words “big bluegill” into Google, something that hadn’t been possible when I was nine in a pre-Internet world. I soon discovered a society of bluegill fanatics unlike anything I could have ever imagined.

Fish in the sunfish group—redbreast, pumpkinseed, bluegills, and some others—are often the first that anyone catches on a rod and line. They can also be stunningly beautiful, with rich streaks of orange and blue and turquoise, hints of red and black and deep ocher, sienna and umber. For a person who loves fish and loves to paint fish, they are remarkable. They fight hard for their size, so are admired among anglers for their bulldog tenacity. They are forgiving and are good teachers for a budding fly fisherman. One could say that they are the ultimate ambassadors from a mysterious netherworld—a liaison between above and below the reflective water’s surface.