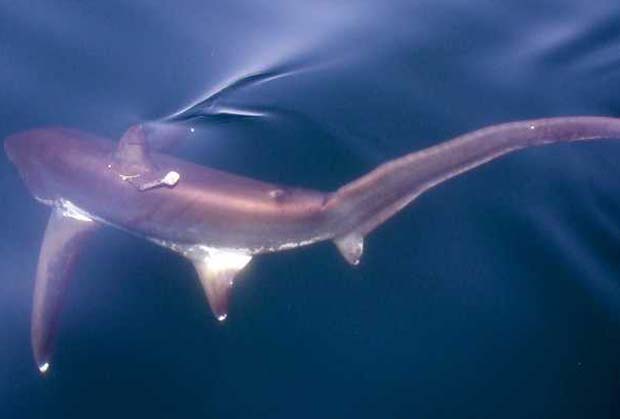 Of Interest: Fish paths, where do they go?

[dropcap]I[/dropcap]f you want to protect a species, you have to know where it is. That can be difficult in the ocean, where animals are often hidden beneath the waves. To find out where ocean animals go and the routes they take to get there, scientists attach electronic tags to them. Those tags collect data on temperature, depth, and location, then transmit their data via satellite.

Jeffrey Polovina is a scientist with NOAA’s Pacific Islands Fisheries Science Center in Honolulu, and he and his colleagues have tagged hundreds of loggerhead sea turtles, bigeye tuna, swordfish, moonfish, and whale sharks. “The tags allow us to see tracks in the ocean,” Polovina said, “but we’re also interested in the bigger picture.”

As Polovina explains in this interview, the bigger picture comes from combining tag data with data from ocean-observing satellites. That oceanographic data shows large-scale features in the ocean such as currents, fronts, and eddies. The tracking data from the tags show how animals navigate through and around these features.

Rich Press: Your research involves combining tag data with data from ocean-observing satellites. What do you learn by doing this?

Jeffrey Polovina: We look out on the ocean and see this homogenous expanse. But animals see it very differently, and that’s why it’s useful to send fleets of animals out with tags on them. By combining tag data with oceanographic data, we get to see how animals perceive the ocean, and that provides some amazing insights.

It’s clear that these animals aren’t just wandering randomly over the ocean. They’re following well-defined paths. Sometimes they’ll get into an eddy, which is a big circulation pattern that can be 100 km across, and they’ll ride around the edge, maybe once or twice, each time taking maybe a month to go around. And then they’ll get off right where they got on, and continue on their way. They get pushed around by strong currents, but then they’ll travel back to resume their trajectory. They’re able to stay within different features of the ocean, something that for a ship would require GPS and satellite imagery. You get a sense that these animals not only know where they are but they know where they’re going in this big ocean.