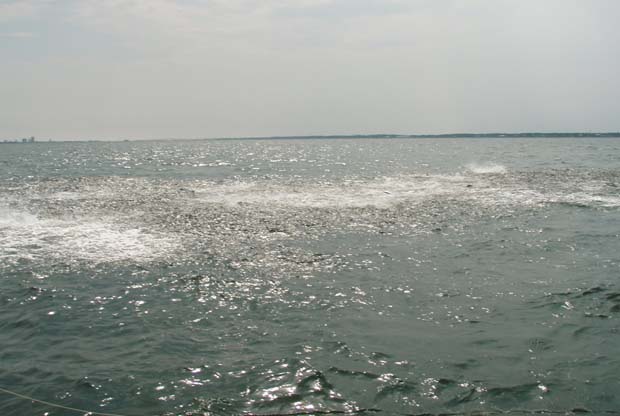 Japan sends fleets out to catch, fin and discard thousands of live sharks every year – believing ‘shark fin soup’ has powers. It does not. We believe omega 3  fish oil supplements have powers. Well, it turns out to be not so true, at least as huckstered.

Forage fish: Menhaden are high in omega 3 oil and are so heavily fished along the Atlantic Coast that many predator sport fish and birds of prey, in some areas, are in decline.

Among the many nutrition supplements trumpeted for potential health benefits, fish oil supplements have been among the most ballyhooed. But as the research on fish oil rolls in, it’s unclear whether the supplements provide all the touted benefits, or are as harmless as claimed.

The Texas-based company Omega Protein kills about 80 percent of menhaden harvested annually. The company grinds up the fish and turns them into products such as fertilizer, dietary supplements and feed for animals including, increasingly, foreign fish-farming operations. They are starving wild fish, birds including ospreys and eagles, plus marine mammals including whales and dolphins to feed farm-raised fish. They have exceeded sustainable harvest levels every year but one since 1955.

Some of the possible benefits of fish oil that appeared in early studies of the supplement seem to have vanished. Along with the difficulty of isolating the effects of a single nutrient, it’s possible that those early studies had small sample sizes, or participants who were truly deficient in the nutrient. Since then, long-term studies have revealed potential harms from taking fish oil unnecessarily. Fish oil supplements contain several vitamins and two significant omega-3 fatty acids, called eicosapentaenoic acid (EPA) and docosahexaenoic acid (DHA). While these nutrients are important, like many vitamins, many people get sufficient amounts from diet. These fatty acids are found in a number of fish, so it is often recommended to get proper doses by eating oily fish twice a week.

Additionally, the amount of these fatty acids in a supplement can vary, so it is important to check the label. There are risks and benefits to the supplements, so it’s important to speak with your physician when deciding whether you are likely to benefit from taking them. [6 Foods That Are Good For Your Brain]

NOTE: Featured Image by Gulf Breeze Guide Service. “Here’s a shot of the menhaden school exploding when the redfish and jacks found them.”