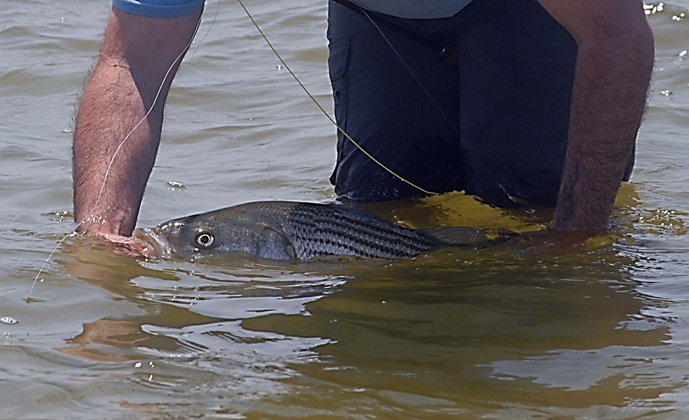 Of Interest: On playing with our food

How can we really justify recreational fishing?

[dropcap]I[/dropcap]f you hang around commercial fishermen much, you’ll notice that a lot of them have complete disdain for recreational fishing. From a practical standpoint, you can’t really blame them. Yes, we play with our food. Some of us get a lot of enjoyment from stalking fish, fooling them into eating something with a hook in it, then “fighting” them to the boat or shoreline. That’s sort of bizarre really when you think about it, not to mention, ehm, maybe somewhat cruel. If you want to read something incredibly entertaining, that kind of explains what I’m talking about here, check this out: (disclaimer: do not read if you are at all offended by the F-bomb) What Kind Of Sick (Expletive) Would Put A Hook In A Juicy Squid Where A Fish Could Easily Eat It? What’s probably perceived as even more ridiculous by some is that we often let fish go after needlessly “torturing” them. That’s not even “playing with our food”; it’s just weird! Sure, the whole catch-and-release thing may seem admirable to us. … To others? Not so much. I can’t tell you how many cocktail parties I’ve been to where I get that blank stare from a non-fisher who might have accidently asked what I do. “Yes, I make a good portion of my living from fishing. … No, I don’t sell fish. … Most of them go back in the water.” Rarely does the conversation make it much farther than that.

The point is that a lot of people out there just don’t get it, because when you consider recreational fishing objectively, it makes little sense. Certainly it’s way cheaper, and much less of a hassle, to stop by the fish market on your way home from work. And the whole release thing? What the H is that about? If you’re not an addict, it’s pretty hard to understand.

I suppose I often feel the need to rationalize it (I’ve done so before in other venues) – not really to others, because, frankly, I don’t give a crap about what others think of it, but more for myself. I’ve pretty much structured my life around fishing, however pathetic that may sound.

Let me start with the “cruel” part. Dionys de Leeuw, in his essay Contemplating the Interests of Fish: The Angler’s Challenge, makes the case that “hunters are significantly different from anglers in the respect that they show for an animal’s interest in avoiding pain and suffering. While hunters make every effort to reduce pain and suffering in their game animals, anglers purposely inflict these conditions on fish.” His assertion, on the surface, appears accurate. Hunters strive to make a quicker, cleaner and painless kill, while anglers value the “fight.”

Without a doubt, I make it a point to mostly target those fish that struggle and exhibit the most extraordinary response to stress – running away from the boat as fast as possible, leaping out of the water, etc. The species that most exhibit these fighting qualities are the fish I consider to be the most awesome. De Leeuw notes, “Not only is there no respect shown by anglers to minimize or avoid the fear, pain and suffering that fish experience while struggling for their lives, but it is precisely the physical expression of these conditions for which game fish are valued.” Yes, light tackle anglers (especially fly fishers) add fuel to this argument because their preferred method involves playing with fish in a “sporting” way with flimsy rods and light leaders, which inevitably extends what Eugene Balon, in his essay Defense of Fishes or the Questionable Ethics of Sportfishing, describes as the “cruel and immoral fight.”