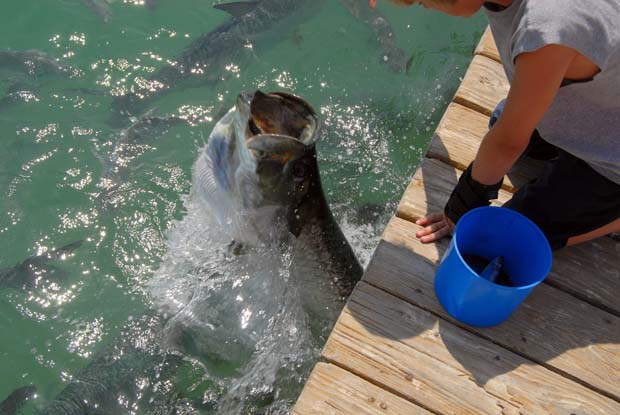 Of Interest: “Robbie’s” of Islamorada, a Florida Keys institution

The following article was written by Dr. Walter Starck and published a few years ago in an Aussie magazine called Fishing News. Walter, like his father and grandfather, grew up fishing. He is a son of Ruth and Buck Starck, a famous Florida Keys pioneer family.  Dr. Walter Starck, a marine biologist, now lives in Australia.

[dropcap]O[/dropcap]ne afternoon some twenty odd years ago, an injured tarpon beached itself at a ramshackle boat rental marina in the Florida Keys. Its jaw had been torn by a fisherman’s gaff and it was unable to feed. The marina owner, Robbie Reckwerdt, picked it up and put it in a large tank where live prawns were kept to sell for fishing bait. Robbie is an old time native Floridian from the back woods who had grown up hunting and fishing. Like many hunters and fishermen, he has a fondness for animals. He called on a visiting doctor to see if anything could be done for the tarpon. The ‘Doc’, an avid fisherman himself, sutured the torn jaw of the fish as best he could. At first it couldn’t eat and had to be force-fed. Soon it recovered enough to feed it self. After a few months it was visibly growing and seemed healthy enough to return to the wild. When released it hung around the dock so they fed it. In a short time it was accompanied by a wild fish. Then others joined in. Over the next few months the school at the dock grew to dozens. Visitors began coming just to see and feed the tarpon.

The Atlantic tarpon is an impressive fish in many respects. Many at Robbie’s dock are in the 50-pounds to 100-pounds range. Their scales are huge (2-inches or more in diameter) and look as if they were dipped in molten silver. When slashing at food on the surface, their gleaming flanks often reflect dazzling flashes of sunlight.

In the late 19th century, Florida began to develop as America’s winter vacation-land and recreational fishing started to become popular. Big game angling had its beginnings here and tarpon were the first big game fish. They were common in inshore waters, easy to find, readily took a bait and put up a great fight, including multiple spectacular jumps, when hooked. Being bony and poor eating probably helped as well. Spending considerable money and effort to catch something useless somehow seems to add an element of elite sport.

Tarpon are still regarded as one of the top marine game fish. As most of those caught are released alive and because they aren’t a commercial species they remain surprisingly abundant, despite considerable fishing pressure from a state population of over 18 million people, plus some 80 million visitors per year.

Although the tarpon at Robbie’s are protected from fishing at the dock, they disperse at night to feed in nearby channels where they are fair game. Among those at the dock, individuals carrying hooks or lures are not uncommon. Remarkably, most hooks and lures disappear over a few weeks. This involves the area around the hook becoming necrotic so that a hook just rots out. After this the wound soon heals.

Individual fish in the school come and go for weeks and months at a time. Some do this for years. Scarface, the fish who started it all, often disappears for months at a time. His most recent visit was only a few months ago. Feeding the tarpon at Robbie’s has become a local institution. Every day hundreds of visitors come to see the tarpon. On busy days the number often exceeds 1000. They pay a dollar each to go onto the dock and three dollars to buy a pail of pilchards if theywant to feed the fish. Most do. Many also buy t-shirts, souvenirs, drinks and snacks. It’s considered to be one of the best tourist bargains in the Keys and has been featured in numerous publications as well as various national TV programs. It would not be an exaggeration to describe the tarpon at Robbie’s as a multi-million dollar asset. Not a bad return for helping an injured fish.

All the feeding going on has attracted a menagerie of other creatures as well. A couple of dozen brown pelicans hang about and compete with the tarpon for any piIchard tossed out. A gang of crevalle jacks (a species of turrum) also try to beat the tarpon to any food. Being smaller, faster and more agile, they do a pretty good job of it too. They can track a pilchard tossed out 65-feet from the dock and meet it when it hits the surface, that is, if a seagull or pelican doesn ‘t grab it even sooner. The jacks are such formidable competitors that if too many begin to hang about, the tarpon begin to loose interest, so every few months Robbie’s crew have an after hours fishing session for them to level the playing field.

Several herons and egrets lurk about the shore end of the dock as wel l. They don’t try to join the fray but prefer to do their own soliciting away from the mob at the end of the dock. Their approach is low key, relying more on beauty than brashness. Although the little snowy egrets are somewhat timid, the larger American egrets are a bit bolder. The undisputed king of the dock, however, is a great white heron. Although he isn’t aggressive, he is afraid of nothing and with good reason. He can drive his beak right through a good sized fish or any creature who might be foo lish enough to challenge him. One day some years ago when I was visiting there, a pelican got into a dispute with him. With one quick strike he drove his beak right through the pelican’s neck, leaving a wound which looked like that from a .45 automatic. There was a lot of blood but nothing vital seemed to have been punctured. My brother decided to take him to a bird hospital a few islands up the road. We put the pelican in a large cardboard box and closed the lid hoping he would quiet down in the dark. With the bird in a box in a van we started up the highway. Along the way he broke out and started flopping around spattering blood everywhere. After managing to get him back in the box we arrived at the bird hospital looking like we might be the patients.

Mixing a thousand, mostly urban, tourists with all this wildlife, results in some interesting incidents. Fortunately tarpon have only fine sandpaper-like teeth and in the warmer months when they are more active, those at Robbie’s will come a one and a half feet or more out of the water to grab a pilchard dangled above the water. Having a huge fish suddenly engulf one’s hand can be a bit disconcerting to an unsuspecting suburbanite.

The usual response is a yelp accompanied by jerking the hand frantically away. This has led to the loss of sundry bracelets, watches and rings. Such bric-a-brac is quickly spat out, then quickly grabbed and spat out by other fish in succession while all the while moving away. By the time it reaches the silty bottom somewhere out of sight in the usually murky water, there is little chance of finding it. The write-offs have included a couple of Rolex, wedding rings and even a good sized diamond, raked from its setting by a hungry tarpon.

Some people of course always want to get closer, so they lie down on the dock and reach over where they can touch the surface at high tide. The tarpon are happy to be hand fed and it’s quite exciting to do this. It gets even more adventurous though, when the jacks are around. Unlike tarpon, they have real teeth, including nice big canines and they aren’t too careful about collateral damage to any fingers that might get in the way. Luckily they don’t chop off fingers, they just rip them up a bit and ensure it’s an experience not to be forgotten.

One of the more amusing incidents began when a lady bought a bucket of pilchards to feed the tarpon. Like every visitor she was warned not to feed the pelicans on the dock. She walked out on the dock where she was soon approached by a hopeful pelican with an open beak. Why be mean? She gave him a fish. Immediately several more jumped down from the pilings where they had been sitting and rushed toward her. They are big birds and have big beaks with a mean looking hook at the end. A half dozen of them rushing at you with mouths agape does look a bit intimidating. She began backing up and the mob closed in. The dockmaster yelled out to no avail and the lady backed right off the dock. As she went under, the pilchards spilled out and she surfaced to see the pelicans launching themselves toward her, presumably to finish her off. After a few seconds of terminal fear she realized the pelicans all around her were only after the fish and she swam unmolested to shore.

Various video clips of feeding the tarpon can be found on You Tube – just do a search on Robbie’s tarpon.