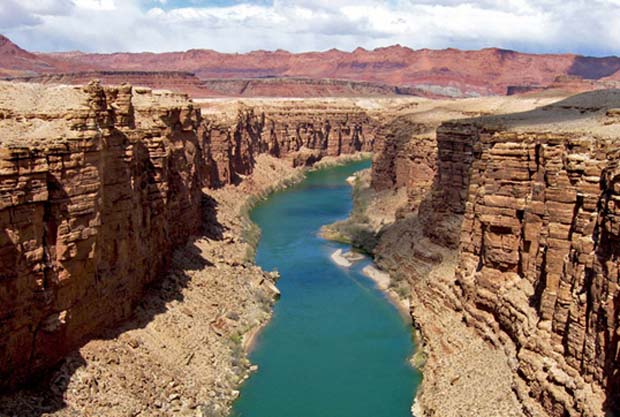 Of Interest: The Colorado River and America’s water crisis

How did the west dry up the Colorado River and water supply?

[dropcap]T[/dropcap]he New Yorker’s compelling piece on America’s water crisis,  Where the River Runs Dry, and its opening photo spread of a dry Lake Mead attests to a picture’s being worth a thousand words. Author David Owen follows up with several thousand more on the disappearing Colorado River. Lake Mead, which forms the border between Nevada and Arizona, thirty miles from Las Vegas. The lake is fed by the Colorado and was last full in 1998. Since then, its volume has fallen by some sixty per cent, and the water level has dropped more than a hundred feet. Credit Photograph by Brian L. Frank.

“ . . . The Colorado River isn’t huge. It’s nearly a thousand miles shorter than the Mississippi and only a fraction as wide, but it’s a crucial resource for a surprisingly large part of the United States. A congressman in 1928 called it “intrinsically the most valuable stream in the world.” It and its tributaries flow through or alongside seven Western states—Colorado, Wyoming, Utah, New Mexico, Nevada, Arizona, and California—before crossing into Mexico near Yuma, Arizona. It supplies water to approximately thirty-six million people, including residents not just of Boulder and Denver but also of Salt Lake City, Las Vegas, Phoenix, Tucson, San Diego, and Los Angeles, several of which are hundreds of miles from its banks. It irrigates close to six million acres of farmland, much of which it also created, through eons of silt deposition. It powers the hydroelectric plants at the Hoover and Glen Canyon dams, is the principal source for the country’s two biggest man-made reservoirs, and supports recreational activities that are said to be worth twenty-six billion dollars a year. Some of its southern sections attract so many transient residents during the winter that you could almost believe it had overflowed its banks and left dense alluvial deposits of motorboats, Jet Skis, dirt bikes, all-terrain vehicles, trailers, mobile homes, fifth wheels, and R.V.s.  . . .”

Get the New Yorker and “Read something that means something.”

Photograph of the Colorado River as it flows through Arizona is this story’s Featured Image (earthdata.nasa.com).