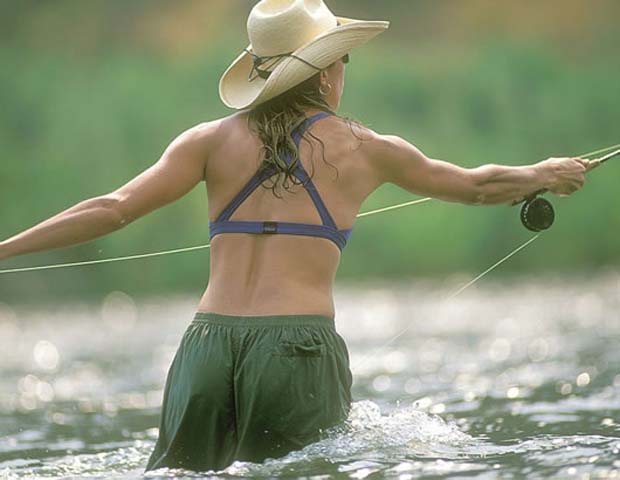 Of Interest: Understanding fly rods and choosing one

If you’re slightly confused by rod actions, ORVIS’ Monahan does a nice job spelling out the history, thinking, engineering and mystifying elements of rod building and defining action. For beginners it is a great intro into what they’ll need to know before buying a rod.

[dropcap]A[/dropcap]sk almost any fly fisherman to cite the differences between fast – and slow-action fly rods, and you’ll probably get some version of: “A fast-action rod is stiffer than a slow-action rod.” While, at a very basic level, this is usually the case, it’s kind of like describing the difference between a Great Dane and a Chihuahua as merely one of size. Such a description of rod action doesn’t come close to explaining the many intricacies and variables involved, nor does it explain why rod action is important to casters and anglers.

Poring over fly-fishing catalogs won’t offer much illumination on the topic, either. Different manufacturers use different terminology to describe their products, and there is no industry standard to which you can compare any one rod. Get a bunch of the industry’s top fly-rod designers together to discuss the issues, and things start to get clearer, although you’ll still hear plenty of competing points of view. Here’s a guide to understanding rod action.

Defining the Problem
It is surprisingly difficult to nail down a simple working definition of action, but it’s clear that action is not a single, physical, unchanging attribute of the rod in the same way that taper and length are. As Sage’s head designer, Jerry Siem, notes, “[Fly rods] have no action at all unless they are loaded with a line and cast.” Rod builder Alan Palmer, quoted in A.J. McClane’s The Practical Fly Fisherman (1953), saw the problem in mechanical terms:

But Palmer offered no language for describing this “linkage.” And trying to define action simply as the “stiffness” of a fly rod doesn’t take into account that the relative stiffness is not uniform throughout. A rod may have a tip that is stiffer than the butt-section, for instance, and the placement of stiffness along the blank can be one of the key determiners of rod action. 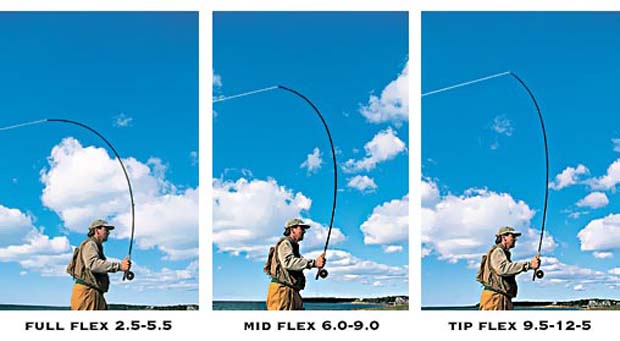 However, world-champion caster Steve Rajeff, who designs rods for G. Loomis, argues that—even if all the parts aren’t, in fact, equally stiff—a fly rod does have an overall feel that makes one rod feel stiffer than another. He sees rod action, then, as a combination of taper (“which determines where the rod bends”) and stiffness (“how much it bends”).

Orvis’s Jim Lepage, a trained engineer, at first struggled with the notion of defining rod action in non-scientific language, but he ultimately settled on two terms, flex and recovery rate, which correspond loosely with Rajeff’s taper and stiffness. (A rod’s recovery rate is the time it takes to return to straight after it has been bent, which is somewhat a function of stiffness.) The Orvis Flex Index, which the company developed in the mid 1990s, describes the speed and amount of power required to make a rod bend to a predetermined load, and it allows Lepage to assign a numerical value between 2.5 and 12.5 to a specific rod action. The higher the number, the faster the rod action.