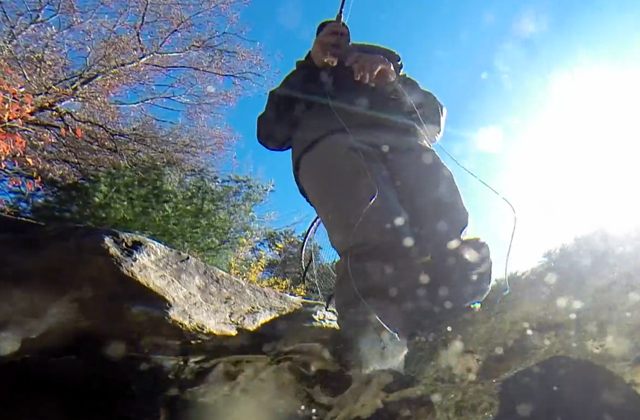 [dropcap]C[/dropcap]am Chioffi, 17, was named after Bruins great Cam Neely. He is the starting goalie for the Weston High School hockey team. But that’s like saying Michael Jordan was just an outfielder for the Birmingham Barons.

When the ice melts, Chioffi is also a world champion fly fisherman.

His combination of talent seems contradictory. In hockey he strives to keep pucks out of the net, in fly fishing the more trout the better in his landing net.

“He’s certainly already more decorated than anybody in the [United States] adult or youth [teams] ever in history,” said Paul Bourcq, head coach of the US Youth Fly Fishing Team. 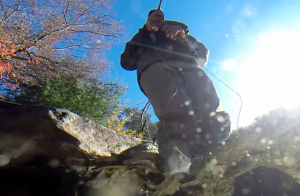 Cam putting the wood to a large fish…

Recently he and his father fished the waters of central Vermont as a tuneup for the 2014 World Youth Fly Fishing Championship in Poland that began Sunday and ends Saturday. His goal was to be the first US angler to repeat individual and/or team gold.

Fly fishing, where imitation bugs lure fish on light tackle, is big in Europe and out west. Here people don’t really understand it, said Chioffi, who is the youngest member of the US travel team.

“People say to me ‘You guys live near some of the best striper waters in the country, Cape Cod Bay.’ Yet we drive thousands of hours and spend thousands of dollars to catch these little trout. We put all our time and effort into the pursuit of the trout.”

He said the magic is in the battle.

“They have this saying, ‘The tug is the drug.’ When the fish eats the fly and you’re connected on the other end and you feel them fighting that’s, I think, what people are in pursuit of the most . . . it’s a huge adrenaline rush.”

As the rushing Furnace Brook cascades around the rocks, the young angler explained why it’s more fun to fly fish than fish with a traditional rod and reel.

“The fight on a fly rod is a lot better, every time you catch a fish, you feel like you have a monster on the end of your line every time.”