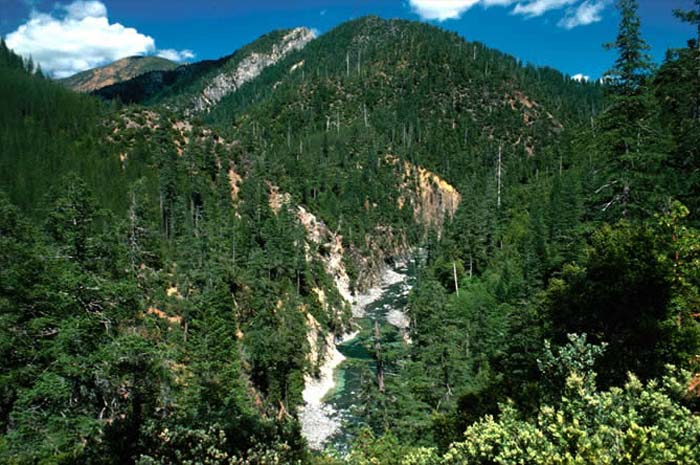 The Department of Interior’s failure to extend restrictions exposes the weaknesses of a key environmental law. The Chetco River watershed is a National Wild and Scenic River – October 28, 1988. The Chetco River is a 56-mile-long (90 km) stream located in the southwestern portion of the U.S. state of Oregon. It drains approximately 352 square miles (912 km2) of Curry County. Flowing through a rugged and isolated coastal region, it descends rapidly from about 3,200 feet (975 m) to sea level at the Pacific Ocean. A commons image.

[dropcap]I[/dropcap]n tight, deep canyons and past tree-trimmed sandbars, the Chetco River runs nearly 56 miles from a remote area of southern Oregon’s coastal mountains to the Pacific Ocean. Many of the river’s miles lie in stretches of national forest crossed by few roads or inside the Kalmiopsis Wilderness, accessible only by a steep walk.

“It’s unbelievably beautiful and clear,” said Zachary Collier, who owns the Northwest Rafting Company and is one of the only operators to run trips on the upper Chetco. Its lower reaches, where dense coastal forests approach the river’s edge, offer world-class salmon and steelhead fishing. The river sustains human populations, too: People in Brookings and Harbor rely on it for drinking water.

But, due to inaction by the Interior Department, stretches of the river and its watershed are now open to mining. In late July, the agency allowed a ban on new mining exploration to expire along 17 miles of the Chetco’s middle and lower reaches. The move comes as limitations on mining on public lands are rolled back nationwide. Environmentalists say that is revealing the weaknesses of key environmental laws, including the 1968 Wild and Scenic Rivers Act. Kayakers on the Chetco River in southern Oregon. Protections that prohibited new mining on the lower stretches of the river expired last month. U.S. Forest Service

For 30 years, the Wild and Scenic Rivers Act has protected stretches of the Chetco from development. But the act is limited. It offers three categories of protection: wild, scenic and recreational. While dam-building is forbidden and extensive construction of infrastructure restricted under all three designations, only stretches labeled “wild” are off-limits to mining and mining exploration.

The Chetco’s 44.5 protected miles include a mix of the three categories. In the past, a mining operation had staked claims along 24 miles of its length. In the short term, “the solution is to plug the Wild and Scenic Rivers Act loophole for mining on the Chetco,” said Andy Kerr, a longtime public lands activist and conservation consultant. In the long term, he says the act itself needs to be overhauled to prohibit mining on all wild and scenic rivers.

Oregon politicians have attempted to minimize that loophole since 2010.  Democratic Sen. Ron Wyden and others introduced legislation that would put most of the river off limits to mining and extend additional protections. But those bills have since languished as Congress remains trapped in partisan gridlock.

So, to prevent a rush of mining claims that would complicate implementation of the new protections, the Forest Service proposed a five-year ban on new mining exploration. Any current mining claims would remain intact, but new development would be off-limits. Such proposals are typical when legislation is pending; this one received strong local support and was approved by the Bureau of Land Management in 2013.

With the bills still stalled, the Forest Service filed for an extension in 2016, but the Interior Department did not act. With expiration looming, this spring, Wyden and a group of Oregon and California Congressmen wrote to Interior Secretary Ryan Zinke, who has the ability to implement emergency protections, asking him to intervene directly. The Chetco River in the Kalmiopsis Wilderness, Southwest Oregon’s Klamath Mountains and within the Rogue River-Siskiyou National Forest. Photo by Lee Webb of the US Forest Service.

“With the expiration date of the current five-year withdrawal fast approaching, and what appears to be insufficient time to complete the process to extend it, our staffs cannot learn anything concrete about what is happening or what is causing what appears to be an inexcusable delay,” they wrote.

But the ban expired when the deadline passed without action from Zinke or the Interior Department. Reinstating it could require an extensive public comment process and administrative approval, during which new mining claims would be permitted.

The removal of protections by inaction is part of a broader trend in the Trump administration, which has prioritized the deregulation of the mining, energy and agriculture industries. Last year, Zinke suspended the activities of more than 200 advisory committees that consult on management decisions in national parks. In addition, key leadership and science advisory posts have gone unfilled for long stretches in the Department of Interior and Environmental Protection Agency.

The cost to the Chetco of that inaction is not yet clear; there are no reports of new mining claims since the ban quietly expired on July 25. On July 26, Oregon Rep. Peter DeFazio, D, introduced federal legislation that would reinstate the ban and make it permanent. But given the scale of the environmental battles being waged under this administration, Collier, of Northwest Rafting Company, is not sure how quickly it could go anywhere. “With so many fires to put out, this is getting overlooked,” he said.

This story was originally published at High Country News (hcn.org) on Aug. 3, 2018.