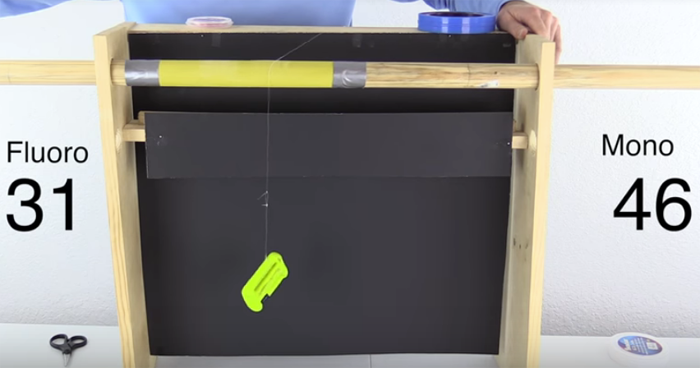 Opinion: In the art of exaggeration fluorocarbon leaders get my nod

Abrasive material uniformly abrading fluoro [left] and mono on a rotating dowel with equally weighted lines – respectively failing at 31 and 46 revolutions [not yet failing]. Watch video for unexpected results.

[dropcap]R[/dropcap]ooting through old digital files seldom reveals anything other than amazement at what I thought was important a decade ago – pertaining to fly fishing. However, I’d accumulated several conflicting position articles on the subject of fluorocarbon leaders versus monofilament going back those same dozen years, and a lot of “false” claim articles about the “Kryptonite” properties of Fluorocarbon.

Here’s what I found:

Glaring – every day enthusiastic fly anglers’ positions on the subject of comparing performance characteristics, mono vs. fluoro, strained to agree with still promoted performance outcomes and ease of use. Those supported by bass tournament champions, fly fishing magazines like ours and print, and commentary by bloggers who [generally] make stuff up and do not research anything were accepting of data that loses its likeliness when sent into the battle.

It was all puzzling until a pattern of innocent blind faith by some scribes, fly shop owners, and YouTubers’ claims, and those of product reps became apparent; exaggerated had gained result authenticity. In contrast, many so-called “working man” fly anglers over time, I noticed, came to a completely different understanding about how “their” fluoro vs. mono as leader material performed. I began to realize that my early-on conclusions about fluoro having less than advertised merit was not a rusted out conclusion. 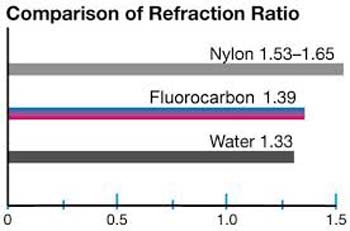 The Japanese invented fluorocarbon fishing lines in the mid-1970s. However, it wasn’t until the 1990s that it was introduced as leader material for saltwater applications and gained acceptance in the sports fishing industry. The use of fluoro by traditional sport fishers was adopted before fly fishers buying in. Marketing assertions started creeping into the ad vernacular, and test data started appearing with over-the-top performance claims along with desireable in-play performance characteristics.

It was a walk on water moment

The “gone-viral” interest in fly fishing hatched after the movie A River Runs Through It [1992] crushed the box office and romanticized fly fishing – linking it to life itself and the thinking person’s sport.

Along with a tsunami of new customers, the fly fishing industry producers matured to being venture capitalist worthy, and mom and pop fly shops began to know what marketing and service meant.

No longer on the sidelines in the fly fishing industry, fluoro got its bounce. That bounce owed more to clever advertising wordsmithing that focused on “likely” performance distinctions then being a serendipitous movie hitchhiker. 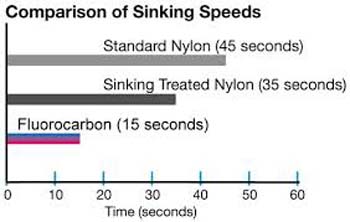 Fluorocarbon had some distinct advantages, and producers saw a greenlight opportunity to turn minuscule into flu vaccine important

The “distinctions” of fluoro versus mono had to be grand because fluoro inherently liked to stay coiled spool-like, knots holding in fluorocarbon leader material are still suspect, and the cost is still at least double that of good quality mono.

The fluoro claims versus monofilament:

The trouble with mono is that hundreds of manufacturers produce it and some product is junk – go to a big box store and look in the discount bins. You can buy huge spools of mono for a few dollars. You’ll never find a brand name in that bin. The big-box store brands are not what I’d recommend in leader line materials, but many of their brands for other products are excellent – especially Cabela’s.

I like fluoro for small stream brook trout, but I stick with name brands

The bitterness of poor quality remains long after the sweetness of low price is forgotten.”