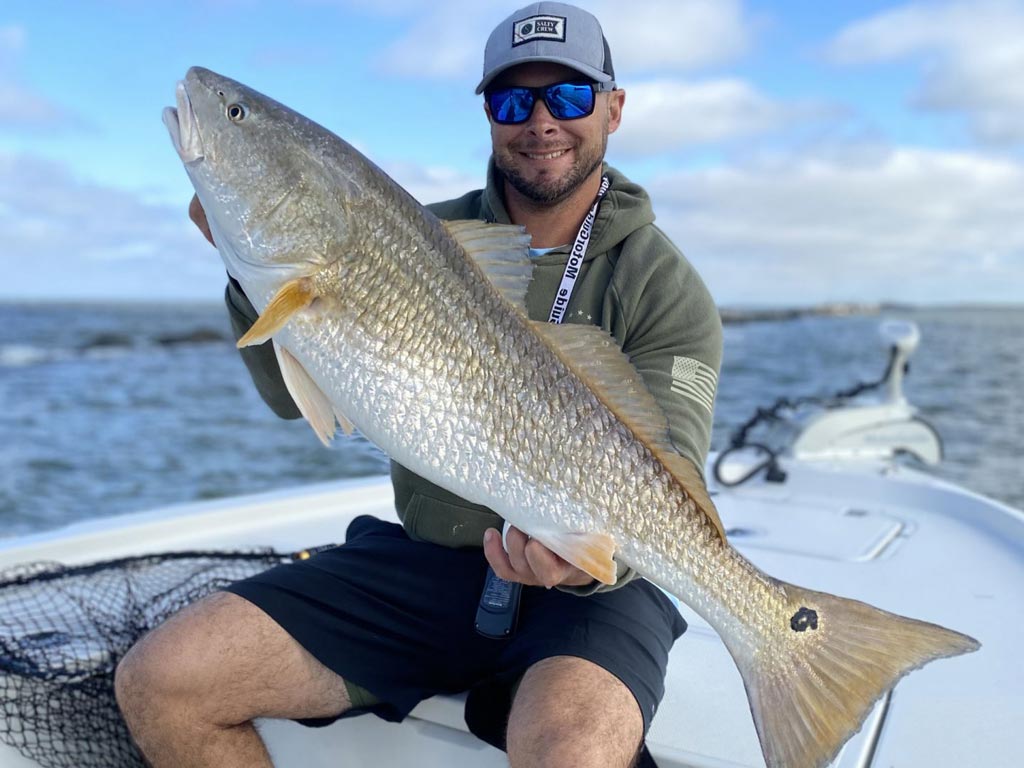 Opinion: Red fishing is all about casting

Redfish [Sciaenops ocellatus] is the perfect game fish to hone your ‘presentation’ skills. They are not as finicky as bonefish, but they insist on being presented with the fly; correctly.

Redfish, although not particularly high on a South Florida fly angler’s list of best game fish, do become so once you enter the state’s northeastern quadrant. And in Georgia and South Carolina (reds are a no commercial harvest fish) and part of North Carolina, fly anglers pursue reds with passion and seriousness. Redfish are to South Carolina and Georgia, what bonefish are to the Bahamas.

Each state is blessed with coastlines dotted with large and small rivers guarded by millions of acres of marshy estuaries and shallow water bays—the perfect storm for redfish. 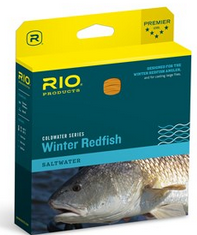 It would be best if you recognized the value of a fly rod. It is as important to the owner as a particular weight and length of a baseball bat would be to a professional player. It has a ‘feel’ that provides confidence, enhancing performance. The rod is the same tool as that preferred bat in fly fishing, but employment is far more complicated. And fly fishing is a decidedly complex way to fish.

A fly rod is a lever that delivers an unfurling of the correctly chosen fly line – a line that connects everything and is assisted by an adequately constructed leader that holds the perfect ‘deceiver’ fly with a not-so-lowly hook. 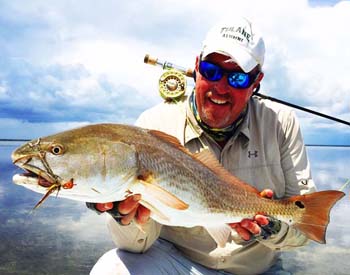 Steve Kantner said, ‘Jody Moore (pictured), whom I quizzed on this, is a big fan of crab flies – and yes, he strips them, unlike for permit.’ Kantner photo.

Redfish are distributed along the Atlantic and Gulf of Mexico coasts from Cape Cod, Massachusetts, to Tuxpan, Mexico, but more abundant, starting in North Carolina Pamlico Sound and traveling south, then west and again south – Louisiana’s winter reds are huge.

As a nearshore species, the red drum is distributed over various habitats, including estuaries, river mouths, bays, sandy bottoms, mud flats, seagrass beds, oyster bottoms, surf zones, and continental shelf waters. Young red drums inhabit mainly estuaries, river mouths, and shallow coastal waters until age three to four. At this age, they tend to leave the protection of estuaries, moving into open coastal waters. Adult drums travel back into estuaries and shallow waters to spawn. Red drums can tolerate a wide range of temperatures, anywhere from 39-93°F. Reds can also tolerate wide ranges of salinity. Although they have been known to travel into fresh and very high saline waters (up to 50 ppt), adults usually stay in saltwater from 30 to 35 ppt.

Most coasts where redfish are found have marshy estuaries or shallow water bays that provide perfect habitats for crustaceans, marine worms, small bony baitfish, and other morsels coveted by redfish. In some states, the residing redfish can be caught every month of the year, and if the weather cooperates temperature-wise in more northern climes as well. Reds can be observed as solitary or exhibiting schooling behavior. They have been known to school with other species, including black drum and tarpon.

Spawning usually takes place from mid-August to mid-November, often near tidal inlets. Drums are known to make a characteristic drumming noise during spawning. Females can produce one-half to two million eggs per season. Eggs hatch approximately 28-30 hours after spawning, resulting in larvae. These larvae are transported into estuaries via currents before settling onto seagrass beds. Juveniles and sub-adults typically stay in bays and estuaries until ages three to four. 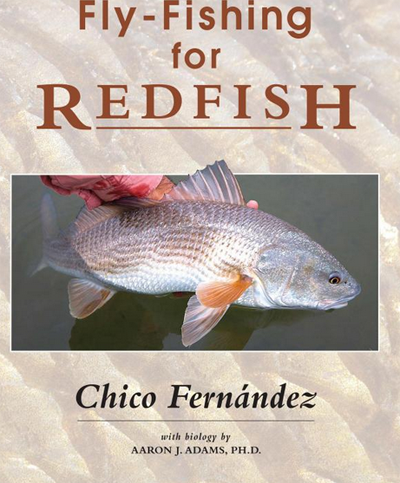 There are too many scenarios to address here. For example, what are the conditions? Clearwater, muddy water, windy, dead calm, sand bottom, seagrass bed, oyster bed, stage of the tide, and on and on.

The one thing that has to take place to entreat a red to eat your fly is a good presentation. Successfully delivering a fly 60-feet to a target as small as a paper plate from the deck of a rocking skiff in a brisk wind in the Louisiana bayou in February takes some doing.

We asked Chico Fernandez, author of Fly-Fishing for Bonefish (2004) and Fly-Fishing for Redfish (2015), and hundreds of articles in national and regional magazines and blogs about the importance of presentation when fishing for redfish. His out-of-the-box reply. ‘It is more important than the fly.’

We asked Capt. Tuck Scott, former head guide at Bay Street Outfitters in Beaufort, South Carolina, what he thought of presentation. He said: ‘Your first presentation of a fly to a red in any profile of feeding or cruising has to be right on the money, and that gives you an 85% chance of getting an eat. If you have to pick up and cast again, you have a 50% chance of getting a bite, assuming the presentation was good. The fish maybe didn’t see the fly, but it sure heard it. If you misfire on the first cast to a tailing red and the fish maintains its tailing profile but does not eat your fly – it knows something is not right. In this situation, a second and third cast will likely yield nothing but an adios from the red.’ 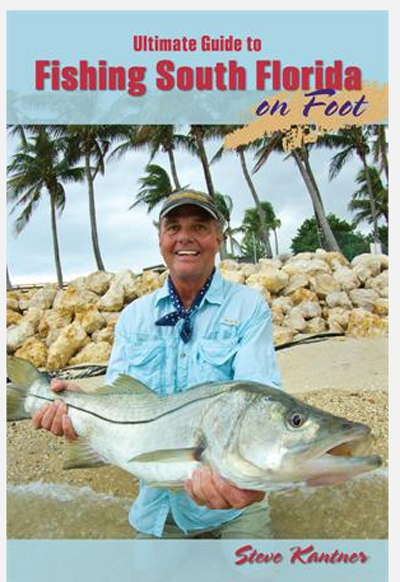 Steve Kantner, author of the popular Ultimate Guide to Fishing South Florida on Foot, and many times published stories in national fishing publications, says the following about presentation and redfish.

When I owned a skiff, I fished for redfish regularly – primarily out of Flamingo. Here’s what I learned:

Presentation, with reds, is all-important. These fish can’t hit a fly if they cannot see or sense its presence. So, say, when one tails with its head in a mud cloud. That’s when you drop your fly just ahead of his nose, and when he tilts up to move, you start to retrieve it. Or when it’s blowing-up glass minnows or mullet, and the sound of a popper is enough to attract it.

When you spot a ‘cruiser,’ aim to intercept him – the same way you would a covey of quail – gauge the speed of your retrieve with how fast he’s moving until your fly is a foot in front of him.

The toughest redfish are the ones laid-up in murky water. So they’re already spooked and moving when you spot them.

I had it easy. All I needed back then were a few weed-less patterns (like the familiar Bend Back) tied in attractor colors. Now, according to my flat-fishing friends, the sport has evolved.

Just for the record, we catch reds from the bank here in South Florida-occasionally big ones during the fall.

Owens is an Orvis-endorsed guide fishing out of Georgia’s St. Simons Island, Jekyll Island, and Sea Island wrote extensively about all aspects of the red fishery. This anecdotal excerpt smartly tells the story of the value of an ‘Accurate Presentation.’

‘Your first cast to a fish is the best chance you have in catching that fish. Several times during the last few weeks, we had water clear enough to see the fish in the water and how he reacted to the fly presentation. One of the most telling moments of the last few weeks was when a client was casting a tailing red. When we first saw the fish, he was tailing away and grubbing for crabs. The angler’s first cast was too far in front of the fish and a little long. The fish didn’t seem to react. His second cast was also off, and the fish stopped tailing. The third cast was behind the fish. All of a sudden, the fish became motionless and froze in place in the water. We kept our eyes on the fish, and it disappeared by sinking in the water and quietly finning off.

Even though the angler didn’t line the fish or make such a lousy cast to spook the fish, after a few casts completely, the fish felt the vibrations of the line/fly hitting the water and became wary and quit feeding. Then after another cast, the fish knew something was wrong and pulled a disappearing act. If the angler’s first cast had been 12-inches in front of the fish’s nose, that fish would probably have rushed the fly.’

In the Pelican State, you can catch juvenile Redfish year-round. As long as they’re within the slot limit, these will make for a delicious dinner. Once fall arrives, you’ll have your shot at reeling in the bigger specimens. The Bull Redfish season in Louisiana is especially vibrant, with the fish sometimes reaching 40-inches. Image credit Image Louisiana Fishing: The Complete Guide . . .

NOTE 1: Source of About Redfish (Sciaenops ocellatus), Habitat and Spawning were provided by the Ichthyology Department at the Florida Museum of Natural History, Gainesville, Florida.