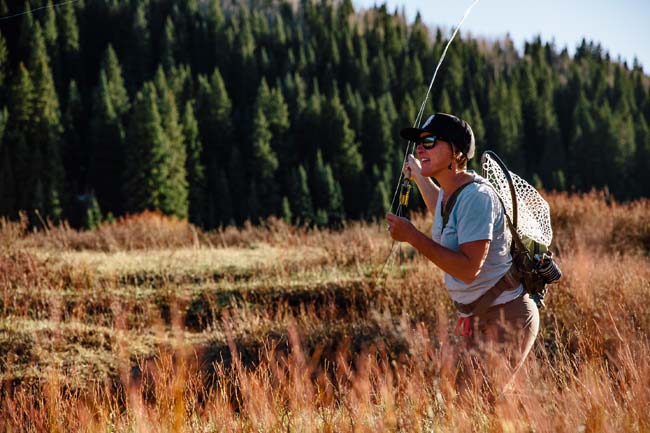 Opinion: Yes, you do need to cast further [dropcap]S[/dropcap]altwater fly fishers that are 100% invested in tarpon, stripers, albies, and dolphinfish, and even flats anglers pursuing permit, bonefish, snook, redfish and other residents of near-shore believe in the need to cast right now, and most times that’s long, and long isn’t 30-feet. Thirty feet is way less than a leader, and the front portion of your fly line -now add a nine-foot rod and your arm – hmm.

In the world of trout, which I recently returned to after three decades in the salt, I found it had changed. You can more easily launch a fly long distance. The fly rods available today, as Lefty Kreh often said are all pretty good (paraphrasing). Fly rods and fly line technologies that didn’t exist 30 years ago have been realized – everyone wanted a fly rod that is lighter, faster and stronger.

Saying you only need to cast a few feet accurately, not long and accurately?

It must be a code that some trout scribes, some trout guides, and most fly shop owners have and that they won’t let me in on. They say with absoluteness, most trout are caught in 30-feet or less from where they stand? Well, it does happen and can occur in less than 30-feet, a lot less. But that’s not the standard I’ve witnessed for over six decades.

The industry built us lighter, faster, longer casting fly rods married to newer fly lines that could be harnessed with accuracy and catch both a wary brown or a cautious bone at 50-feet or more

To hug 30-feet as some magic rule is bizarre. To me, it’s like a pro baseball manager saying to a scout: “No, we can’t use a pitcher like him. He throws too hard, and he’s far too accurate.”

Another example, think of albies in Montauk on any beautiful fall day – hundreds of them up and out of nowhere crashing bait pods for a minute, then gone. And repeat, and repeat, and repeat in between stripers gorging on up and down baits. In that situation, you have to unload fast and long.

You can’t cruise up tight to a boil where dolphinfish are maniacally crashing baits and expect an excellent 30-foot cast will do. No, you just killed a bait boil and a chance at a day to remember. After you catch one and keep it in the water and on the hook sure, but the dolphinfish are there not there for the baitfish, and shorter casts are possible.

That scenario of casting right now holds true for daisy chaining tarpon, tailing permit and most of the briny world of game fish, and a cast of 30-feet will probably not play well

Veteran preachers of the trout world believe the need to cast long distance is casting for show only and that you just scared all the trout in the next two pools with that 60-foot launch. Their fire and brimstone video also promises you that all the trouts you’re ever going to catch are 25- to 30-feet away or less and that a half hour of stalking is a better investment than an ability to cast long. Trout preachers like that are sure no one with the ability to cast 70-feet would think to search cast short first.

Any saltwater angler casting a fly 100-feet to begin his or her search is a terrible idea because he or she knows the search is not out to in, but in to out. You start a few feet away first and then work your way out. Fly casters have been doing that since the late 1700’s – way before today’s bloggers spun their spin.

Casting long with a fly rod is an irresistible rod designers dream – and I never buy one that can’t get it on.