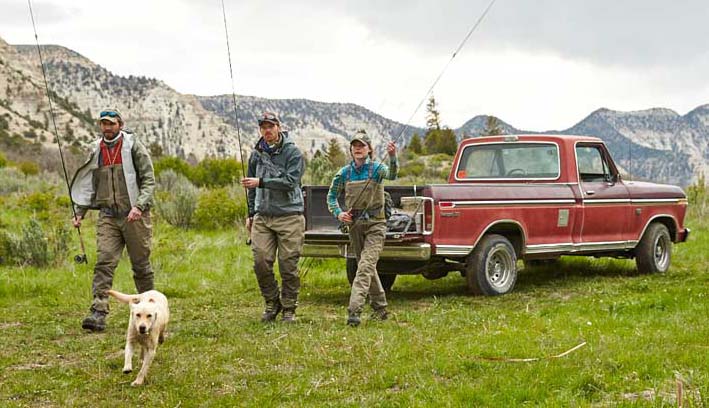 Fed with from snow high atop the Continental Divide, Colorado’s rivers develop into some of the country’s best trout streams. The water flowing east, eventually to the Atlantic Ocean, crosses the more arid slopes and short grass prairies, while the water flowing west meanders through the greener terrain of the Western Slope, before it (hopefully) reaches the Pacific Ocean. — Orvis Colorado

American West discovers how to make money on the outdoors: Enjoy it.

[dropcap]F[/dropcap]or the past 100 years, Colorado’s Grand Valley rode the wave of commodity prices—from uranium to oil shale to natural gas. Now, the region is staking its survival on another natural resource: the great outdoors.

Flanked by red-rock buttes and the largest mesa in the world, the Grand Valley is capitalizing on its natural assets to bolster its once-flagging economy. Hundreds of miles of bike trails cut across the high desert, vineyards line the banks of the Colorado river, and a white-water rafting park is under development near downtown Grand Junction, the valley’s largest city. More than 1 million tourists flow into the valley every year, many from booming Denver, and unemployment is at the lowest in more than a decade. The region now rivals Moab, Utah, as a premier destination for mountain biking.

The outdoor boom comes as jobs in extraction decline. Nationwide employment in mining, oil and gas fell by nearly a third from 2012-2016 while outdoor employment jumped 16 percent, according to BEA data. Even as the shale boom produces record volumes of crude and natural gas, technological advances in drilling and fracking have eliminated many jobs. — Bloomberg

“Outdoor recreation could change the face of rural America,” said Sarah Shrader, a local business owner and founder of the Outdoor Recreation Coalition of the Grand Valley. “In four years this place has made a complete turnaround.”

The valley’s investment in recreation is a hedge against the volatility of the energy and mineral business. A rush to mine gold, silver, uranium and radium in the Interior West over the past two centuries gave way to oil and gas drilling, as rugged terrain awash in minerals fueled economic activity. Extraction created thousands of jobs—but also subjected Colorado and other western states to the unpredictability of booms and busts. 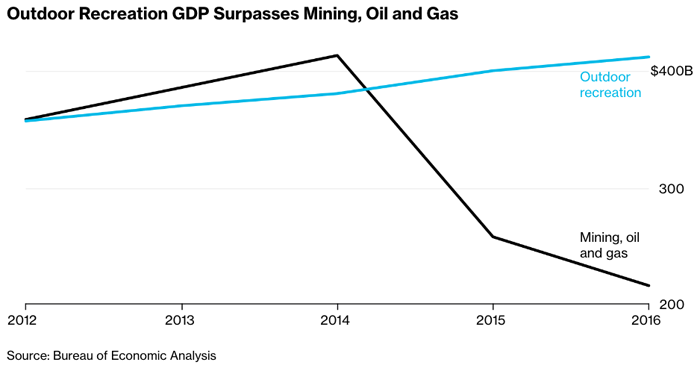 Hard to cheat on reality, but they do try.

Skiing, hiking and other outdoor pursuits now comprise an industry that contributes more to the national GDP than mining, oil and gas. From fly-fishing guides and resort stays to boot manufacturing and mountain bike sales, the sector grew faster than the U.S. economy in 2016, the latest year data is available, according to the U.S. Bureau of Economic Analysis.

VF Corp., owner of The North Face, SmartWool and other brands, is among companies capitalizing on the trend as they expand globally. VF announced last year that it will move its headquarters to Denver from Greensboro, North Carolina. The company’s activewear portfolio is its best-performing segment, reporting 30 percent revenue growth from five years prior. Brunswick Corp., which sells leisure boats and sports equipment, reported a 34 percent jump in sales during the same time period while Columbia Sportswear Co. saw a 33 percent boost.

Travel and tourism is by far the largest contributor to the outdoor recreation economy, followed by apparel and accessories