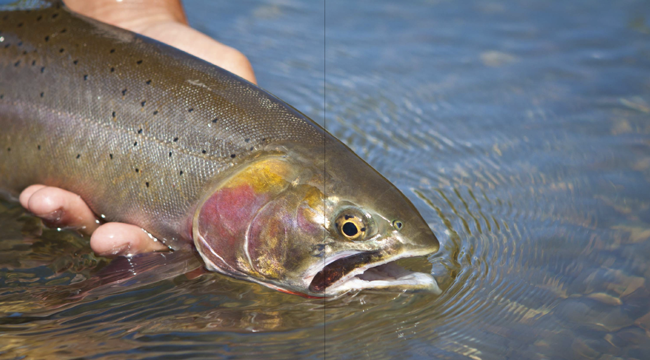 [dropcap]W[/dropcap]e profiled artist Scott Donaghe in our March, 2012 issue of Fly Life Magazine, but have not gotten around to transferring all the archived issues to the new WordPress format. His popularity with readers prompted us to repeat Scott’s interveiw.

We got a chance to interview Scott Donaghe and here’s what he had to say.

FLM: Where were you brought up and how did you get into photography?
SD: I was born and raised in Chula Vista, California (about five miles south of San Diego and ten miles north of the Mexican border). I attended Bonita Vista High School and then went off to college at Cal Poly Pomona. It was at Cal Poly that I took some photography classes and started to really enjoy what was possible with a camera. Little did I know that it would come back to me later in life. 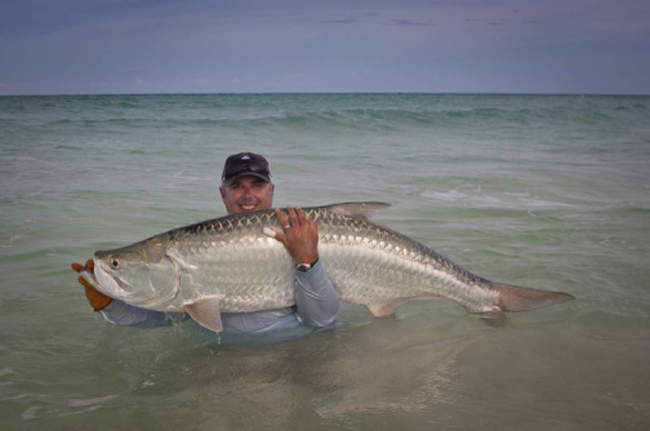 Scott, on a trip to Belize hooks-up on the last cast on the last day at sunset. A big“poon” gets released in the gin clear waters of the flat it was caught on.

FLM: When did you get into fly fishing?
SD: I started fly fishing in the late 80s while attending Cal Poly. My parents had taken us on vacation for the trout season opener in Yellowstone National Park as kids. I watched my cousin catching fish after fish on the Yellowstone River at Buffalo Ford with a fly rod. That image definitely stuck with me. In college, a buddy of mine and I started sneaking off to Bishop/Mammoth Lakes area several times a month to fish for trout. While we were busy throwing spinners, the guys in the float tubes with fly rods were catching all the fish. I was determined to give it a try. I remembered that my dad had a Sears and Roebuck fly rod and reel in the garage. One weekend, I picked it up, but the line had rotted and needed to be replaced. I found a fly shop close to college in La Verne, California called End of the Line. The owner Jeff Hensley set me up with a new line, some flies and I would soon be addicted. Now I was the guy with the fly rod in the mountain lake catching fish and learning how to untangle my leader every other cast. Jeff taught me to tie flies and sold me my first set of waders, a pair of Simms neoprenes that I still have today. I continued fly fishing as much as I could from there on out and then in the 90s I met the owner of the San Diego fly shop, Jeff Solis. He showed me fly fishing in the saltwater for tuna, dorado, marlin and just about anything on a fly rod.Jeff turned me on to fly fishing in the surf and a new passion was born.

FLM: Do you guide now?
SD: I have been fly fishing in the salt water for about ten years and guiding clients in the San Diego surf with Jeff Solis for the past five years. 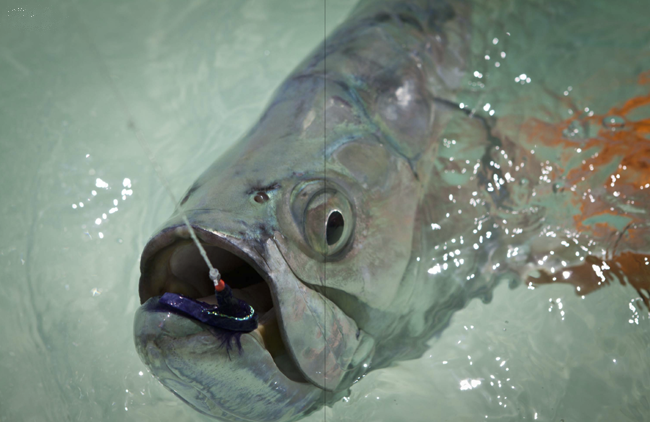 FLM: Did you have a mentors with regard to getting into fly fishing?
SD: Early on, my cousin Mick Coy and his dad L. D. Coy mesmerized me as a child while camping in Yellowstone with them and watching them fly fish. They burned the image of a tight loop into my mind and lit the fire that I later stoked in college. Jeff Hensley later mentored me by teaching me to cast, teaching me to tie flies and telling me lots of stories about his trips to Montana and the Lower Owens that kept me excited to fish. Jeff Solis got me started in the salt water and taught me everything I needed to know to land my first yellowtail, tuna, dorado, marlin, tarpon, roosterfish, permit, bonefish and more. Funny, I’m now his guide. A few years ago I found a new fishing buddy, Paul Sharman. He lived right down the street from me and shared my sickness (maybe even more so). In addition to being quite a skilled fisherman, Paul’s a freelance photographer and writer. He pushed me into writing a few articles for Richard Anderson at California Fly Fisher and I bought a digital SLR to shoot the photos. Although he moved back to his native England, he continues to amaze me with the work he produces. Gary Bulla has also been a mentor of mine. Gary does week long trips to Baja and has more information that anyone could need on fishing around Ceralvo Island and Magdalena Bay. Gary is an living encyclopedia of Baja and I am a huge fan of his. Another mentor of mine is a close friend, John Carroll. John used to take me for week long trips on his boat to Baja in the summer. We would camp on the deck of the boat and anchor up around islands or in bays wherever we were. Although John is not a fly fisherman, he is a complete waterman. He has taught me so much about fishing, weather, wind, travel, Baja, etc, in my ten plus years of traveling to Baja with him. In addition to Paul Sharman, mentors for my fly fishing photography include Corey Kruitbosch, John Sherman and Bryan Gregson. I am absolutely in awe of the images that all of them produce, day in day out. 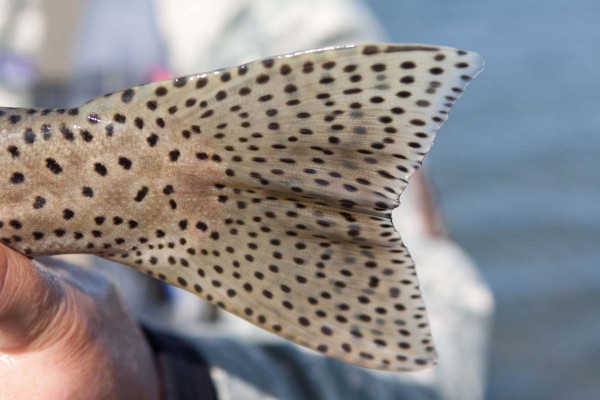 FLM: When did you get into photography big time?
SD: I started shooting fishing photos in about 2000, mostly so I could prove some of my stories to my wife and later my kids. Paul Sharman had talked me into going to Pesca Maya (Yucatan) with him to shoot some photos of the bonefish, tarpon and permit for a story he was writing. I was to be the “photographer”. I got some amazing images but it was clear to me at the end of the trip that I had a lot to learn. It was after that trip that I really got the bug and ordered a new body and some expensive lenses. I really couldn’t afford them at the time and bought them using one of those 12 months same as cash offers. I have been shooting most of those lenses ever since. Now when I travel to fish, I am likely to have just as many bags filled with camera gear as fishing gear. 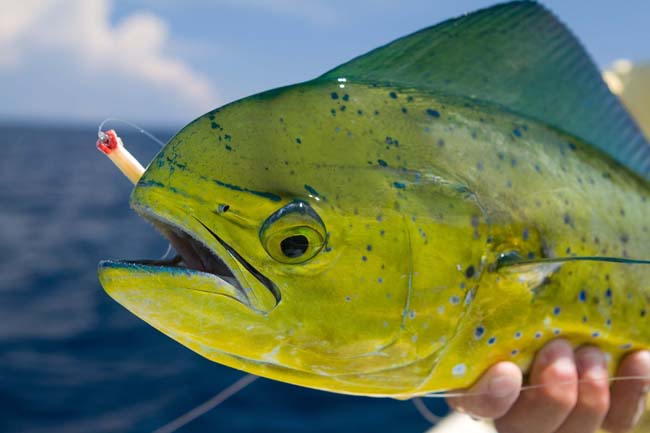 FLM: What’s the best catch you ever had?
SD: My best fish thus far was a big tarpon from a flat in Belize. I hooked him from a boat and then landed him on the flat where I had originally hooked him in about 4-feet of clear water at sunset in about 25 minutes. I had fished for a week and had landed a 60-pounder that I was pretty happy with. I had jumped a few other tarpon, but had not landed any other fish on the trip. On the last day, I cast to the big and he ate right at the side of the boat. The image of that huge mouth swallowing that fly is seared into my mind.

FLM: You seem to travel a lot..
SD: Fly fishing has given me the opportunity to travel quite a bit. I have fished all over the eastern and western coasts of Baja, the Yucatan, Belize and Canada in addition to much of the western US. 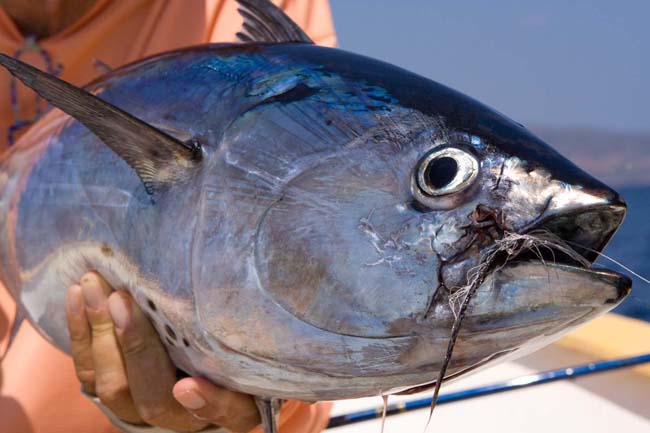 FLM: Where do you live now and what keeps your engine running during a typical week.
SD: I still live in Chula Vista, California and fish the San Diego surf several times a week. There is something about spending a morning or evening chasing fish in the surf on the beach watching the sun rise or set. There is not a better way to start or end a day. For the past five years, my buddy Jeff and I have been guiding clients. Teaching clients to fish in the surf and photographing them in action keeps my batteries charged. I absolutely love the smile on someones face the first time they catch a fish and knowing that I had something to do with it. Summertime in San Diego means sight fishing for Corbina in the shallow surf. Much like fishing for bonefish on  a flat, these fish are spooky, hard to feed and great fighters. There are many days spent stalking these fish and lots of fishless days where you have cast to many fish but have landed none. It is fun and frustrating at the same time, but catching that one fish that you have stalked and laid a perfect cast on keeps me coming back. 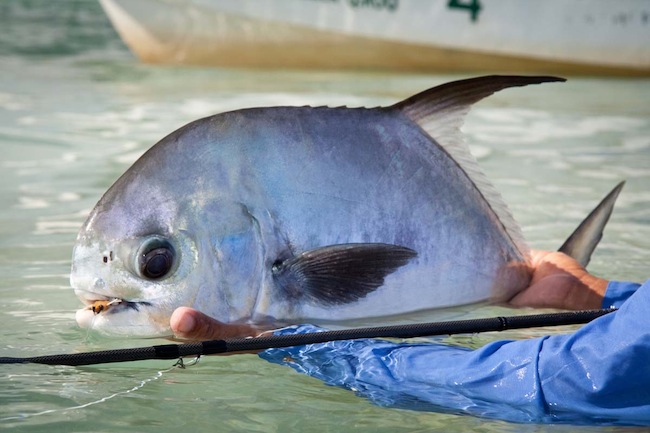 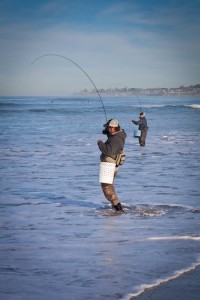