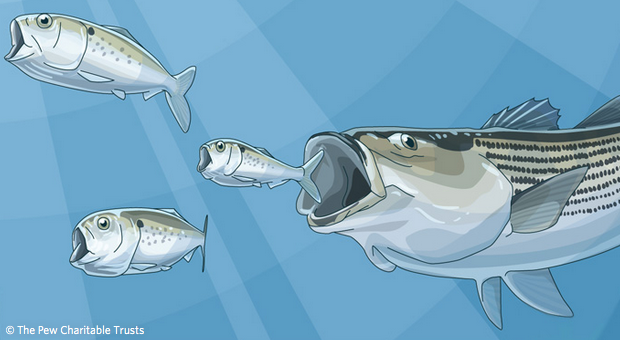 By Peter Baker for The Pew Charitable Trusts

[dropcap]A[/dropcap]t its Aug. 3 meeting, the Menhaden Management Board of the Atlantic States Marine Fisheries Commission (ASMFC) will decide how much menhaden fishermen will be allowed to catch along the East Coast in 2017. If managers increase the catch limit, hundreds of millions more menhaden—often called “the most important fish in the sea” because of their role as food for predators—will be removed from the Atlantic Ocean.  Here are 10 reasons the board should not raise the existing catch limit on these forage fish:

The ASMFC created the first coastwide catch limit in 2013 and set the allowable catch lower than the amount taken in preceding years in order to help menhaden rebuild. The quotas leave hundreds of millions more menhaden in the Atlantic to become food for fish, seabirds, and mammals.  Early reports suggest that conservation is working and the menhaden population is growing.

2. Predators need menhaden in the water

Last year, the ASMFC committed to shift from single-species management of menhaden to a big-picture approach recognizing that menhaden serve a critical role in the water as food for important predators. Managers should not change the catch limit until scientists and managers complete their work examining how menhaden numbers affect predators.

Striped bass and weakfish eat menhaden, and their populations are struggling. Other important species such as humpback whales, eagles, and osprey depend on menhaden for food as they recover from decades of challenges. Taking millions more menhaden from the ocean could harm efforts to rebuild these species by reducing the availability of prey.

4. There is no new science to justify an increase

A decline in forage fish can cause negative impacts that ripple through the ecosystem, so coastwide catch limits should always be based on the best available science. Managers increased the menhaden quota by 10 percent in 2015 based on the most recent available assessment, but there is no new assessment to turn to this year. Therefore, managers should wait until scientists complete their new plan, including an evidence-based analysis of the health of the Atlantic population and the effect of any change in catch limits on the ecosystem.

5. Menhaden have not recovered their historic range off the Northern and Southern states

There is some evidence of recovery in the Mid-Atlantic and Southern New England, but menhaden remain far below their historic numbers in the Northern and Southern regions of the East Coast. However, if conservation efforts continue, they can be abundant again from Maine to Florida.