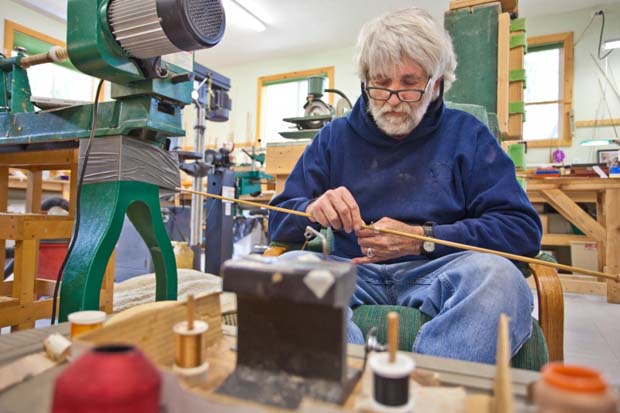 Point of View: How the Governor Blamed a Janitor for Killing a River

Who gets to see the governor? Who gets to violate the Clean Water Act? Who gets to kill all that is living in the river? Who gets to pollute with impunity? Well, let’s see, what did the lobbyist say to the Gov?

“Hey gov, my name is Louis Cyphre, and you’re on the right track. We can help you pollute the Flint River – you know, help out a few of your friends, put a whole bunch of treehuggers out of work, destroy the fly rodders fishery and blame little people in your office. But look here gov, I wear Armani on my back. So if you want to pollute in this man’s land let Lincoln and Jackson start shaking hands.” The tragedy occurring on the Flint River, Michigan cannot be diminished

[dropcap]T[/dropcap]he horrible impact on unsuspecting families is incomprehensible, and the flawed science behind the decisions that allowed this atrocity to happen is inexcusable. But in this new age of regulation-be-damned politics, the Flint catastrophe may serve as the crystal ball of what the future may look like if the stewardship of our nation’s fresh water supply succumbs to the pressure of unregulated forces intent on either making or saving a buck while public health and welfare pay the price.

Montana’s Clark Fork River once flowed orange in the days of the twentieth century Copper Barons as its headwaters spewed from the city of Butte. The rehabilitation of the river has cost hundreds of billions in tax dollars. The same can be said of the entire Great Lakes system in the 60s when Lake Erie was declared biologically dead at the same time ninety percent of the biomass in Lake Michigan was alewives. The ongoing cost of cleanup to the taxpayer has been staggering. This story has been repeated time and again throughout the country, and while there is no historical precedent that could ever support a degradation of any waterway as beneficial, it would seem that history should have taught us all a great lesson by now.

Let’s dump 8.64 million gallons per day of raw untreated wastewater into the pristine headwaters of the upper Au Sable River. Why not?

But no! The same Michigan Department of Environment Quality (MDEQ) and State Administration responsible for the Flint River fiasco has recently approved a proposal that would allow a commercial fish farm utilizing the old Grayling State Fish Hatchery to dump 8.64 million gallons per day of raw untreated wastewater into the pristine headwaters of the upper Au Sable River. Long considered a natural treasure to both Michigan and the rest of the country as well, the effluent containing a staggering 3,540 pounds of phosphorus and 274,234 pounds of solid waste per year would enter the river below the city of Grayling and just above the nine-mile acclaimed section referred to as the Holy Water. Known as a Mecca to trout fishermen near and far, this revered portion of the Au Sable sets the standard for water quality and blue ribbon fly fishing, but more importantly, it is considered to be the ultimate retreat for those seeking to replenish their souls in a setting of peaceful solitude. His operation will employ four workers, and he’s happy that 100’s will lose theirs

Under what some might regard as a misguided allegiance to the agricultural lobby, MDEQ admits that the water quality of the river will undoubtedly suffer by allowing the discharge, but the agency also states that this collateral damage is necessary to support “important social and economical development in the area.” The owner of the fish farm Dan Vogler is dismayed by the voices of opposition to the plan and expresses disdain for the mean-spirited individuals with “two-thousand dollar fly rods” who are intent on destroying the livelihoods of hard-working farm families. His operation will employ four workers.

Depending on a clean river

The bigger question might be whether it is ever justifiable to allow one person to benefit financially from the intentional degradation of a valuable resource at the expense of so many other individuals and long standing businesses that depend on a clean river. Josh Greenberg of Gates Au Sable Lodge employs thirty people and is troubled that this discharge could impact his business. Also, there are canoe liveries, four fly shops, guides, restaurants, motels, and many other concerns that provide goods and services to sportsmen, recreationists, and even those who buy two-thousand dollar fly rods. Not only does this MDEQ decision potentially threaten the stability of these businesses, but there is no way to predict the deleterious long term effects this policy may have on the public health and welfare of everyone associated with the river.

As a sacred sanctuary for so many, there is a reason that the hallowed section of the Au Sable is referred to as Holy Water, and its potential desecration would be like allowing a herd of goats to roam the aisles of the Sistine Chapel. It is ironic that the state department in charge of environmental integrity would be the agent of such egregious environmental defilement, and its decision ought to outrage fly anglers, nature lovers, and all who believe that there are far too few of these special places  still left on the planet.

There are those who would vote for pollution, and do

At present, there does seem to be an insidious attempt to weaken many of the hard fought for environmental gains that have occurred since the Clean Water Act was passed in 1972. Along with the Au Sable, a proposed open pit metallic sulfide mine on the edge of Michigan’s Menomonee River and recurring polluted releases from Lake Okeechobee into Florida’s Caloosahatchee River causing red tide in the Gulf of Mexico are but a few raising the red flag of impending disaster. As if the barbarians at the gate have been waiting for the right moment to catch a complacent and distracted society asleep in the guard tower, the modern day deregulation crowd intends to use the jobs creation rallying-cry to pad their pockets in the name of greed. This is an archaic battle that has been fought before, and what we have learned from the past should be obvious. No amount of jobs can justify the cost in terms of human health and environmental destruction. Plain and simple! Human beings need clean water to survive, and healthy fish populations are indicators of a river’s well-being.

In a recent statement by Michigan Governor Rick Snyder, after the firing of two mid-level DEQ officials for their perceived roles in the Flint incident, stated that “Some DEQ actions lacked common sense and that resulted in this terrible tragedy in Flint. I look forward to the results of the investigation to ensure these mistakes don’t happen again.” The friends of the Au Sable can never let the Governor forget his words.

Bud, these words are for you

Five months before his death, Grand Rapids native, environmentalist, artist, and friend Dr. M.C. “Bud” Kanouse sent me a delightful story he wrote about his memorable experiences on the Holy Water. In response to a book I had just written, his final letter to me concluded: “Your writing takes me to the unconscious, constant presence of the trout, the fly and to the excellent environment of the trout. As Michigan author John Voelker (a.k.a Robert Traver) said, the attraction of the trout is for the most part, ’the environs where they are found.’ Unfortunately, the very part of the world we are trying so hard to destroy.”

In the name of all that is Holy, sportsmen and citizen’s alike need to stand up and tell those responsible for the callous disregard of facts leading to the health disaster on Flint River that the willful pollution of the Au Sable cannot be tolerated. None of us can ever afford to let our guard down to allow the destruction of, as Bud stated, “… the excellent environment of the trout.”

Thanks to my friend’s encouragement, I will continue to write and fight for any river, anywhere, because, in a way, they are all connected

And wherever you are Bud, these words are for you! Nick Lyons described Kustich’s writings “. . . quietly but fiercely independent, free from the commercialism that cloaks the fly-fishing world like a fungus.”

“Jerry Kustich is one of the most readable and engaging writers I know. He’s an expert on virtually any subject he touches, but he’s never ponderous. Instead, he’s a consummate storyteller and humorist who happens to care deeply about fishing.” (Marshall Cutchin, Publisher, Midcurrent)

“Jerry Kustich is at his best in this collection of stories and essays recounting a lifetime in fly fishing. He leads us up the river of life through tranquil pools and treacherous rapids of experience, from the joy of catching a huge trout to the incomprehensibly tragic and premature death of a loved one.” (Norm Zeigler, Author of Snook on a Fly and Rivers of Shadow, Rivers of Sun)

Jerry Kustich is the author of At the River’s Edge: Lessons Learned in a Life of Fly Fishing, A Wisp in the Wind: In Search of Bull Trout; Bamboo, and Beyond, and coauthor of Fly Fishing for Great Lakes Steelhead  – all published by West River Publishing. His articles and essays have appeared in Fly Fisherman, Big Sky Journal, Fly Rod & Reel, and many other publications.