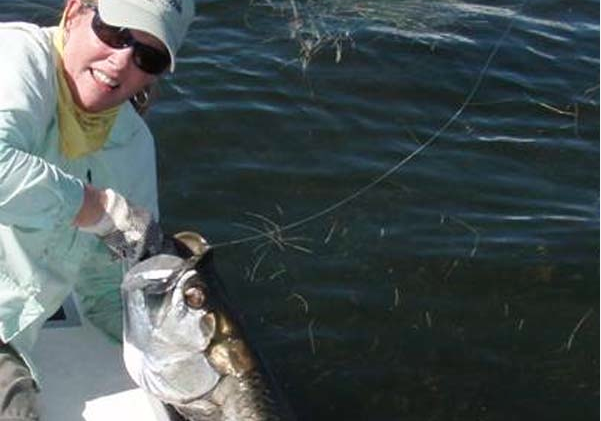 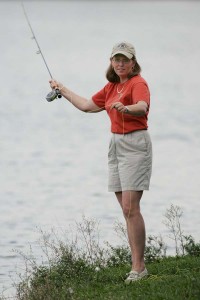 Cindy poses for Oz Saiki, a world class Miami model and magazine cover photographer who is a fly fishing aficionado as well.

[dropcap]C[/dropcap]indy Russel and I both spent many years in western Pennsylvania, but did so many miles and decades apart. She’s from Oil City, grew up in an outdoor family, and is cut from that same cloth.

Cindy’s introduction to fishing came after she graduated from Penn State in 1982. She had learned to despise the cold winters, days-old gray snow and black ice. That’s why she jumped at the invitation to come to Florida and stay with her aunt and uncle in Miami. They introduced Cindy to fly fishing the Florida Keys, Everglades National Park (The Park), Biscayne Bay, canals, Lake Okeechobee and more. She became addicted to both warm weather and fly fishing.  Cindy immersed herself in anything to do with fly fishing, eventually meeting up with a like minded Capt. Dave Hunt who became her husband. NOTE: Dave is a Florida native and grew up fishing the canals, lakes, Biscayne Bay, Everglades National Park and the Florida Keys. There isn’t much water he hasn’t fished over and he seems to know when and where the fish are or will be and when. Cindy’s had her source to feed her addiction for fly fishing. Some years ago, she began a still fervent passion for big tarpon and she is well known for her skill at catching big tarpon.

There are some pretty special tarpon anglers in South Florida and Cindy is in the “Bigs” with the best of them and that’s why Fly Life Magazine.com chose to interview her. Cindy especially loves fishing The Park so that’s what I generally focused on.

FLM: What triggers the arrival of big tarpon in The Park and how do you know it’s game on?

CR: I have a huge advantage there because Dave is usually there during the week almost year-round and he and his close-knit guide friends always swap information. The big deal though is knowing the seasonal implications and conditions that spark the big, transient tarpon passage through The Park. That’s essential to catching big tarpon.

FLM: What specifically do you mean?

CR: The water has to be around 75 degrees, the bait fish have to be abundant and found deep into the park which means less fresh water in the back-back country and there has to be plenty of other food for the tarpon. If in any year there’s a lot of rainfall, fresh water replaces the more saline water in the back-back country which flushes out bait and if the water warms up too high – it’s game over for large tarpon. That said, I’ve caught big tarpon in sweet fresh water because there was plenty of bait. Smaller resident tarpon are almost always around all year. These would be darker backed fish up to maybe 50-pounds, but generally 20-to 35-pounds and there’s plenty of baby tarpon in the 2- to 10-pound range. Too, there isn’t really a specific season. I’ve caught big tarpon in the most consistent times of the year, which is May and June. In any one year it could be terrific for a few weeks at a time in January, February, March, July, August, September and even December. The whole thing is more about weather, water temperature and bait being plentiful.

FLM: Who would you credit as mentors with regard to catching big tarpon?

CR: My husband Dave, who guides me almost exclusively, literally and figuratively taught me everything about the peculiarities of big tarpon. Too, along the way I got to meet and spend time with Andy Mill who was always willing to share with me his insights about our mutual passion.

FLM: At what point in time did tarpon capture your attention?

CR: It was by total accident. When I had just gotten to Florida in 1982, I was bass fishing with a fly rod on Lake Hicpochee, near Moore Haven, Florida when a a 10- to 15-pound tarpon engulfed my popper. I didn’t know what to do and the fish threw the popper. I was both stunned and exhilarated. It was from that botched encounter that stimulated me to become a tarpon fanatic.

CR: Well, I wasn’t smart enough to start with the little guys and learn from them so my accomplish date with a big tarpon took the better part of two years, and a lot of frustration along the way. On that magic day, I had 17 tarpon eat a fly and on the 18th feeding, the whole thing came together and I got the fish to the boat. It’s not a sport for the weak at heart. 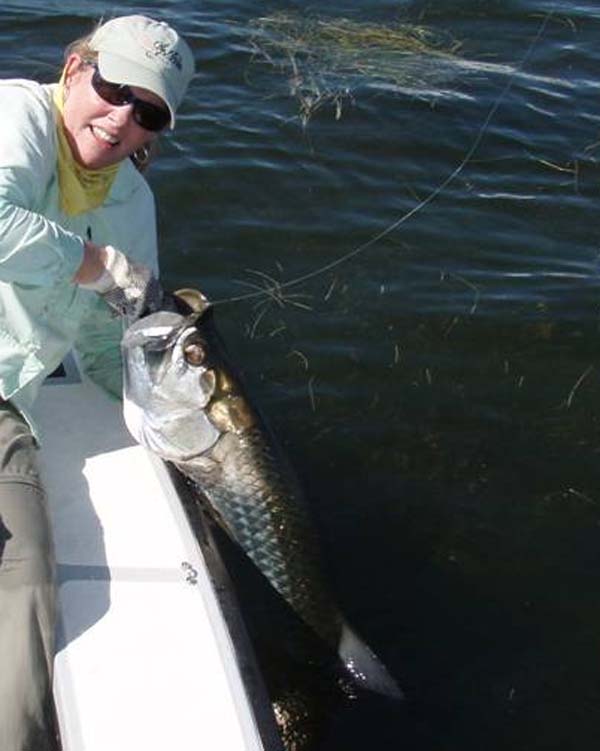 FLM: Many guys I know, including myself, when seeing the first big tarpon pod come rolling their way have turned from coordinated athletes to instantly uncoordinated boys flailing their fly rods, line and fly as if suddenly afflicted by a palsy. Have you ever gotten that melt feeling?

CR: Absolutely.  The day I don’t feel the possibility of a melt coming is the day I stop fishing. Learning to channel that energy into something positive is a good trick. For novice anglers my advice is to accept that possible melt as fait accompli – the rush is good. Use it – don’t let your mind turn to mush, just get that cast off right now. One of the best remedies for dealing with wobbly knees is a day the tarpon just keep rolling by and that if you don’t hook one right away, the world won’t end. Now, with so much tarpon time under my belt I look forward to the rush, but I’m always sure of myself and I’m always lovin’ it.

FLM: In Andy Mills’ book A Passion For Tarpon, he says he likes to use the butt end of the rod to fight big tarpon and also use his legs. That has allowed him to always land a tarpon in the 120-pound class in less than 20 minutes. What’s your opine on that?

CR: Andy’s successes with catching big tarpon are the stuff of legend – almost worldwide. If I hadn’t already been doing something and Andy advised me to add thus and so – I’ve  adopted it. For example, Andy uses a light drag setting for those long, explosive runs and keeps pressure on the line with a gloved left hand until the line is back on the reel and only then. Staying flexible with bent knees – and squared to the fish with relaxed shoulders and elbows prevent lunges, by you or Mr. tarpon, from causing break-offs. I always want to get the fish to the boat as fast as possible and make a safe in-water release so employing the butt end of the rod and utilizing my legs will defeat the fish fastest. As the fish tires, I don’t let it gulp air – I don’t let it turn on its side and gulp air. I don’t ever take the fish out of the water. Yes, you can land a big tarpon in 20 minutes.

FLM: What about rods and set up?

CR: On a typical tarpon trip, I’ll carry four rods. If the water is clear and shallow or on slicked off days, I’ll use 10-weights. One rigged with intermediate sinking line and the other with clear floating line. For deeper water or windy conditions I’ll have two 12-weights. One rigged with intermediate sinking line and the other rod with sink tip line. My leaders are all 70% butt with 30% class tippet with an added shock tippet. Clear fly lines have greatly lessened the need or really long leaders. The butt is tied to the fly line with an Albright Special and the butt to class with an improved blood knot. NOTE: The latter knot was shown to me by Andy Mill – I’ve never seen it in any book? Here’s how it’s tied: Double the class tippet and make four wraps over the Butt then three over the latter then wrap the butt two or three times over the class, then, just like a regular blood knot, put both ends through the center – wet and pull tight with gloved hands. Do the same with the shock, but make the shock about 36-inches long so you can change flies and not have to do a redo.

CR: If I’m oceanside fishing for big tarpon, my flies will be small – bunny or squirrel tail with a little marabou. If the tarpon are high and happy, I’ll use deerhair heads. Dave ties 99% of the flies I use – and they’re all custom. Essential are weed guards and hook selection. I like Owner’s 5180 series SSW straight eye with a slight offset. For laid up tarpon, a dear hair head with splayed feathers – I want the fly to sink slowly. If need be, I can always trim the deer hair in the boat to adjust the sink rate. For brackish water I’ll use the standard purple or black bunny tail or something with orange grizzly with splayed feathers that are crab-like. Frankly, the fly and hook chosen are important, but I believe it’s presentation that spells the difference.

FLM: Do you bend the barb down for tarpon?

CR: No. Their mouths, as you know, are like concrete. More than half the time when you got the fish to the boat and the line slackens – the hook just falls out. With softer mouthed fish I bend down the barb.

FLM: What’s the casting distance needed for an angler to be successful – assuming accuracy? 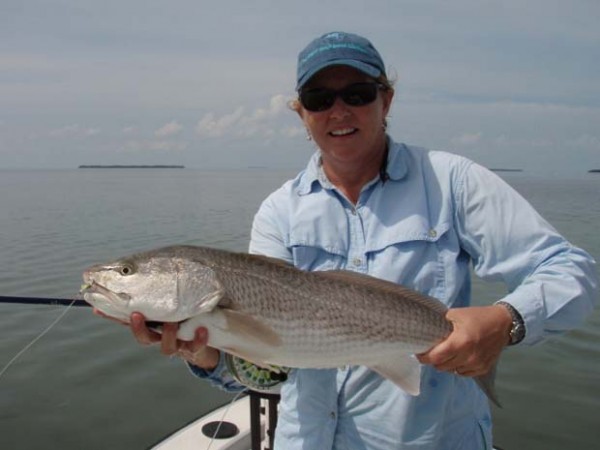 There are plenty of other species in The Park. Here’s a nice red.

FLM: This is hard to have a specific answer because of the variables, but what’s good lead distance thinking and what about false casts?

CR: Yes, you’re right. There are many variables. You need to consider these factors: guide is poling, stacked out, tidal pull, type of fly line your using and weight of the fly you’re using so there is no set lead distance. About false casting; if you’re on your sixth false cast, you’ve made four too many.

When tarpon are approaching, it’s more about getting the fly in the proper water column – the same as the tarpon and that’s a real trick. Too, once you’ve gotten the fly in the right depth, you’ll need to strip faster than the fish are moving. In a tarpon pod, the lead will be a big female. If your fly doesn’t look right too her she’ll refuse and veer off and the entire pod will follow her rejection. Sometimes, because the pod got up on us too fast, I’ll throw over the lead fish and sweep the fly into play.

FLM: How many days do you get to Tarpon fish The Park?

CR: Twenty, and that’s not enough!

Cindy’s husband, Capt. Dave Hunt is an ORVIS endorsed guide and one of my favorite go to guides.