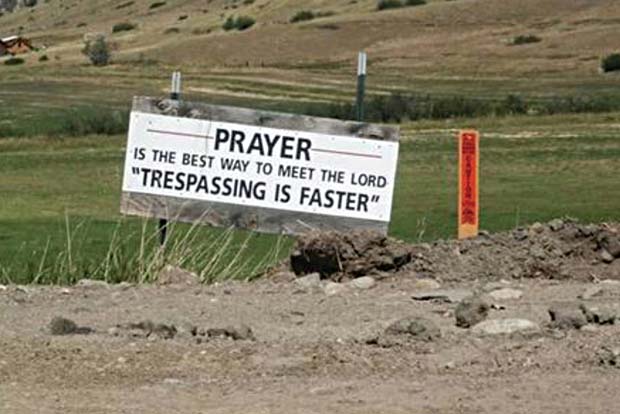 Public Lands Series: The fringe is metastasizing. If it governs us – who will it serve?

Above reads: Mr. Heckert, tear down this tarp! Armed militants had covered up the Malheur NWR sign in protest. Oregon and Washington BHA members Brian Jennings, Ed Putnam and Mark Heckert (below) arrived on the scene to stand up in defense of your public lands.

By Land  Tawney / BACKCOUNTRY JOURNAL SPRING 2016 / This story is republished with permission. Note: The sub-heads are not necessarily approved by Backcountry Journal. And the comments in bold and italic are by our editorial staff and not those of the author Land Tawney, president/CEO of Back Country Hunters & Anglers. [dropcap]T[/dropcap]he Bundy Family Road Show at the Malheur National Wildlife Refuge in Oregon has come to an end. Patriarch Cliven Bundy, along with two of his sons and other armed militants, are now in custody. But for the millions of American families who depend on our public lands, threats remain.

. . . refusing to pay $1 million-plus in grazing fees, promoting the seizure of public lands has always had a sideshow-like quality, and events at Malheur provided a ready-made pulpit for his noxious views. But the Bundy’s ideology should not be written off as merely the lunatic fringe.

What is noteworthy – and more ominous – is the reaction by politicians and others who implicitly or expressly support Bundy’s contemptible bill of goods. It signals a new and unsettling phase in the battle over ownership of America’s natural resources, one that Americans who value these resources must collectively condemn.

• And Rep. Chris Stewart of Utah (Republican Party) recently introduced legislation that would give counties in Utah control over public lands wilderness areas in his state, opening the door for widespread development in these valuable areas.

Criticizing the government is nothing new, of course, and most of us will concede that improvements can be made in resource management. Yet what Labrador, Fiore, Fielder and Stewart are doing reflects a concerted effort to undermine America’s public lands system. They are open about their motives. Legislator Fielder, for example, introduced a stream of legislation that would steadily erode public lands. These bills failed, but Fielder was hired by the American Lands Council (the ALC sounds great and looks great, but they would sell our public lands out ” . . . for thirty pieces of silver”), a conflation of lawyers and ideologues supported by the Koch brothers and other billionaire land barons whose mission is to eliminate America’s public lands system.

The tactics employed by the Bundy’s and their followers are different from those of mainstream politicians. But their goals and rhetoric are virtually identical

The fact that our nation’s vast, publicly owned landholdings are valuable is without question. They harbor a wealth of resources, everything from oil, gas and timber to drinking water and wildlife habitat. For 100 years, special interests have vied for that wealth.

However, American citizens also appreciate our public lands’ importance beyond mere resources. These special places are economically valuable and offer a breathtaking range of recreational opportunities – hiking, camping, fishing, and hunting, as well as the chance to enjoy simple solitude – that can be neither duplicated nor replaced. Their loss would be a one-way street to disaster.

Plenty of room for improvement exists when it comes to public lands management. Sportsmen are often among those advocating management changes. Yet in recent years, agencies charged with administering public resources have seen their funding cut. Inadequate resources leave them vulnerable to accusations of poor management, forced to accrue maintenance backlogs and cut public services. If you don’t feed the body, it gets sick

Don’t be fooled by rhetoric that anti-public land activists simply want to shift ownership to states from the federal government.First, we the people own our public lands. Federal agencies are the caretakers. Second, history has shown that states are perfectly willing – and often economically driven – to sell land holdings.

That’s the real goal here: to make public lands private property. If this happens, Americans will lose access to these lands. Important fish and wildlife habitat would be irrevocably diminished. And the outdoors heritage bestowed on us by our forbearers would be gone forever.

The public land grab, therefore, is bigger than the Bundy’s. This scheme is being perpetrated by well-moneyed interests committed in the long term to undermining America’s public lands system. We the people must stop this insidious plan. But the key to doing that is understanding that this is not about isolated miscreants. It’s a well-funded and sophisticated campaign to take what belongs to all of us: America’s irreplaceable outdoors legacy.

Land Tawney is a fifth-generation Montanan, a public land hunter and president/CEO of Backcountry Hunters & Anglers.

Join Backcountry Hunters and Anglers and stay focused on who has your back. Become a paid BHA member and help keep our public lands, your publlic lands, from ‘the grip of fools’.  The website is free and always a great guide to the out-of-doors . . .