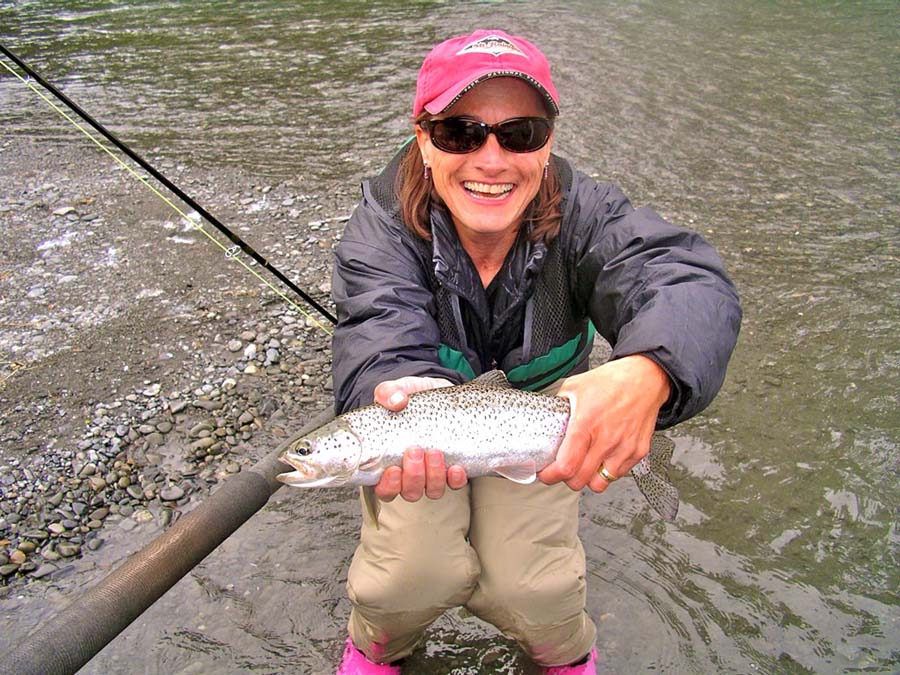 Rainbow Trout, the symbol of our environmental health

[dropcap]R[/dropcap]ainbow trout are members of the Pacific trout and salmon subgroup of the salmon family (Salmonidae) which also includes the redband trout, cutthroat trout and golden trout. Regarded as the most widely successful of the introduced salmonids and the most widely known and recognized of the worlds trout species, rainbow trout rank among the top five most sought game fish in North America. The name Oncorhynchus means “hooked snout” in reference to the distinctly hooked upper or lower jaw of mature males.

The name mykiss is a vernacular from the Russian far east where the species was first described in the late 1700s.

Within the few park streams either inhabited by naturalized rainbow trout or where individual fish have been encountered as the result of stocking programs downstream, the sizes of individual fish typically range from 7 to 12 inches in total length. Occasionally larger individuals are encountered including a 19 inch rainbow captured by an angler in the North ForkThorntonRiver in 1998. As is the case with the other trout species in Virginia, the largest individual rainbow trout are typically encountered within large stream habitats, ponds and reservoirs. The current state record specimen (14 pounds, 7 ounces) was captured in Greer’s Trout Pond in southwestern Virginia on June 28, 1993.

The average life span of wild rainbow trout in Virginia waters is very similar to that of brook trout. Maturation begins as early as one year with average survival of three to four years. Maximum known longevity is 11 years but 7 year olds are typically the oldest in most populations.

Wild rainbow trout populations within Virginia most often occur in small rocky streams in forested landscapes. Hatchery reared rainbows are widely stocked within streams, rivers, ponds and lakes throughout central and western Virginia. Rainbow trout were first liberated in stream habitats within and downstream of the park in 1943. The wild rainbows that inhabit Pass Run within the park are believed to have descended from hatchery stock introduced downstream during the 1950s. Rainbow trout have also successfully reproduced intermittently in the North Fork Moorman’s River since 1957 as the result of stocking programs downstream.

Rainbow trout are considered native in the North Pacific Ocean and associated drainages from the Amur River in eastern Asia, north along the Pacific slope including the KamchatkaPeninsula and extreme northeastern Russia and along the Pacific slope of North America from Alaska south to northern Mexico. Like the brown trout, rainbows have been extensively introduced and now occur on every major continent except Antarctica.

Rainbow trout are not as closely associated with streambed or benthic habitats as are brown trout nor are they prone to frequent deeply shaded habitats like brook trout. Rainbows prefer open runs where they tend to feed at the surface more frequently than the other two trout species. Alaska rainbow caught at The Cabin On The Road – by Artix Kreiger, commons image.

Like the other trout species, rainbow trout are opportunistic feeders, readily taking aquatic insects encountered in drifting water flow and terrestrial insects that fall into the stream. Larger individuals will include fish in their diets just as readily as any other large trout. A 12 inch rainbow captured in Pass Run during June, 1997 had at least 19 partially digested to entire cicadas within its stomach along with a partially digested longnose dace and a number of other smaller insects.

While not typically encountered in size classes beyond 12 inches in park streams, large rainbow trout of comparable size to large adult brook trout can be aggressive competitors for available habitat within the confines of a small stream. Fortunately, the Pass Run population is the only naturalized rainbow trout population currently persisting within the park. The limited and sporadic production within the lower reaches of the North Fork Moorman’s River apparently results from very few, occasional redds as the result of rainbows stocked just downstream of the park boundary. The degree of displacement pressure on brook trout posed by these rainbow trout populations is currently unknown.

Naturalized rainbow trout populations within other portions of native brook trout range have proven to be problematic for brook trout, principally via displacement. Generally, displacement issues are greater where naturalized rainbow trout populations are well established and more widespread. Such is the case in within some sections of Great Smoky Mountains National Park and vicinity, and in southwestern Virginia. Rainbow trout are the most dominate trout in the MountRogers area for example. North of Roanoke, the distribution of rainbow trout is more limited to spring creeks of which Pass Run is a good example.

Generally, rainbow trout are more sensitive to the effects of acidification than either brook or brown trout. Pass Run, particularly the section downstream of the park, is one of the most well buffered and productive streams within or adjacent to the park since it flows extensively over limestone and is fed by a number of large limestone springs.