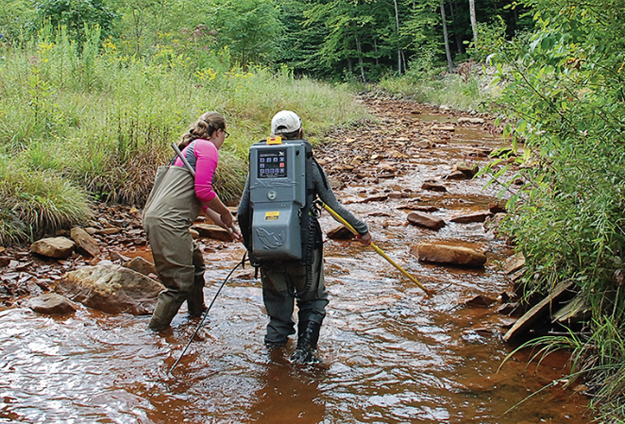 Graduate students fish the Tang-orange waters of Bilger Run in Western Pennsylvania. Despite its ugly color, the stream has water chemistry that supports a population of brook trout. (Donna Morelli)

As mine drainage gets cleaned up, will native “brookies” surviving in impaired water give way to introduced “brownies?”

[dropcap]I[/dropcap]n the words of one scientist, the water of Bilger Run, about 20 miles east of Pennsylvania’s famous town of Punxsutawney, “looks like Tang.” Yes, Tang, the powdered orange drink that was available to, if not enjoyed by, U.S. astronauts of the 1960s.

“No one would think there are fish in there,” said Tom Clark, author of the Tang comparison and an acid mine drainage specialist for the Susquehanna River Basin Commission.

But there are fish in there. There are, in fact, native brook trout in there, considerably more of them than of their nemesis, the larger and somewhat hardier European brown trout. Fish counts this summer have shown that the discolored stream has roughly nine “brookies” for every brown trout — a species introduced to the Eastern United States in the late 19th century, when the native trout seemed to be succumbing to overfishing and habitat degradation.

In contrast, in nearby Kratzer Run, which meets Bilger near Curwensville, on its way to the West Branch of the Susquehanna, the water is quite clear — and the survey numbers are the other way around: a preponderance of brown trout by nearly four to one.

Brookies surviving in Tang-colored water may come as a shock to laymen and even fly-fishing enthusiasts, who know the native trout as a sort of poster child for freshwater stream health. But scientists are not surprised. It’s well-documented that brook trout have a higher acid tolerance than brownies do. And Bilger Run’s acidity is low enough for brook trout to survive and high enough to keep the browns out. It is not lost on the researchers for whom, at least in this case, fixing the stream’s acid problem will mean trouble for the brook trout. “While everyone can agree that [acid remediation] is a good thing,” said Brianna Hutchinson, an aquatic biologist with the river commission, “our expectation is that it is not going to be good for the brook trout.”

Acidity, or low pH, is caused by acid mine drainage, a widespread problem in Appalachian coal country as surface and shallow groundwater is turned highly acidic by contact with coal mining waste. When the polluted water makes its way into a stream, it lowers pH levels and elevates metals, particularly iron and aluminum which are harmful to fish, as well as the insects that sustain them. Two centuries of coal mining contaminated thousands of miles of Pennsylvania streams, with nearly 2,000 miles in the Susquehanna basin classified by the state in 2012 as impaired by acid mine drainage. The river commission is in the early stages of a project, funded by a $300,000 federal grant, to remediate acid mine pollution in the Bilger watershed. And fisheries scientists have pounced on it as a perfect opportunity to monitor the two trout species and measure the territorial effects of the remediation, both during and after.

“We are looking at what happens when we [correct] the low pH,” said Hutchinson, who is leading the trout project. Also taking part in the study are fishery specialists from Trout Unlimited, Indiana University of Pennsylvania and other institutions.

“We want to see at what point during the remediation do the browns start moving in [and] what will happen to the brook trout,” Hutchinson said. “Do they move into tributaries? Are they eaten?”

Generally speaking, according to Jennifer Graves, a graduate student from Indiana University of Pennsylvania who has been surveying and tagging the trout since July, the brown trout tend to drive the natives away. “When brooks and browns live in the same stream,” she said, “[the browns] will push the brooks up to the upstream limits.”