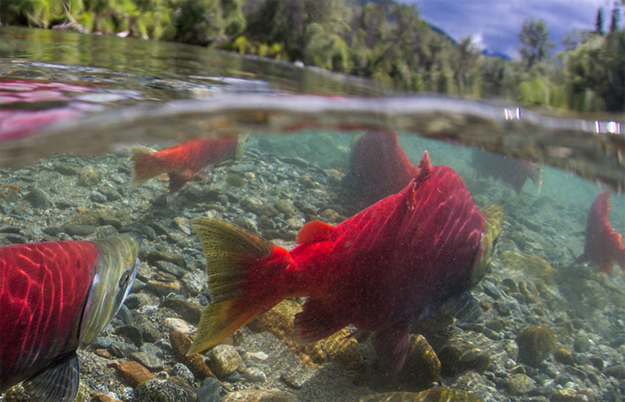 On a bright June evening, a group of people who care passionately about the plight of Atlantic salmon gathered at the Veazie Salmon Club on the banks of the Penobscot River. Image Jonathan King NOAA.

[dropcap]R[/dropcap]esearchers, academics, fisheries managers, non-governmental organizations, and members of the local salmon club came together to recognize the hard work that has gone into restoring the Penobscot River’s habitat for sea-run fish. The Penobscot River Restoration Project removed two dams and improved passage around two others. As a result, critically endangered Atlantic salmon, as well as river herring, shad, American eel, and other sea-run fish have improved access to hundreds of miles of their historic habitat.

“Rivers like the Penobscot are where we make fish. Sea-run fish are indicators of the health of our estuaries, our groundfish stocks, and our communities,” said John Bullard, regional administrator for NOAA Fisheries Greater Atlantic Region, who was there to present the awards. “It’s amazing to hear about the signs of ecosystem recovery that we are seeing. While we haven’t seen strong returns of Atlantic salmon yet, the results of the restoration project for other sea-run fish are encouraging. To go from fewer than 3,000 river herring in 2013 to more than 1.2 million returns in 2016 is awe-inspiring.”

The evening’s festivities included recognition of the efforts of two individuals, Claude Westfall and Andy Goode, who have been instrumental in helping to restore this population of endangered fish.

While the early signs are encouraging, there is still much work to be done. With the partnership of Project SHARE, Downeast Salmon Federation, the Nature Conservancy, Atlantic Salmon Federation, USFWS, the State of Maine, the Penobscot Indian Nation, and NOAA Fisheries, work will continue on restoring access to sea-run fish habitat through connectivity projects and promoting awareness through campaigns like International Year of the Salmon, Species in the Spotlight, and World Fish Migration Day.

This video spotlights efforts to recover Atlantic salmon population – the only salmon native to the east coast of the U.S.
[youtube id=”IScGS09tyVk” width=”620″ height=”360″]