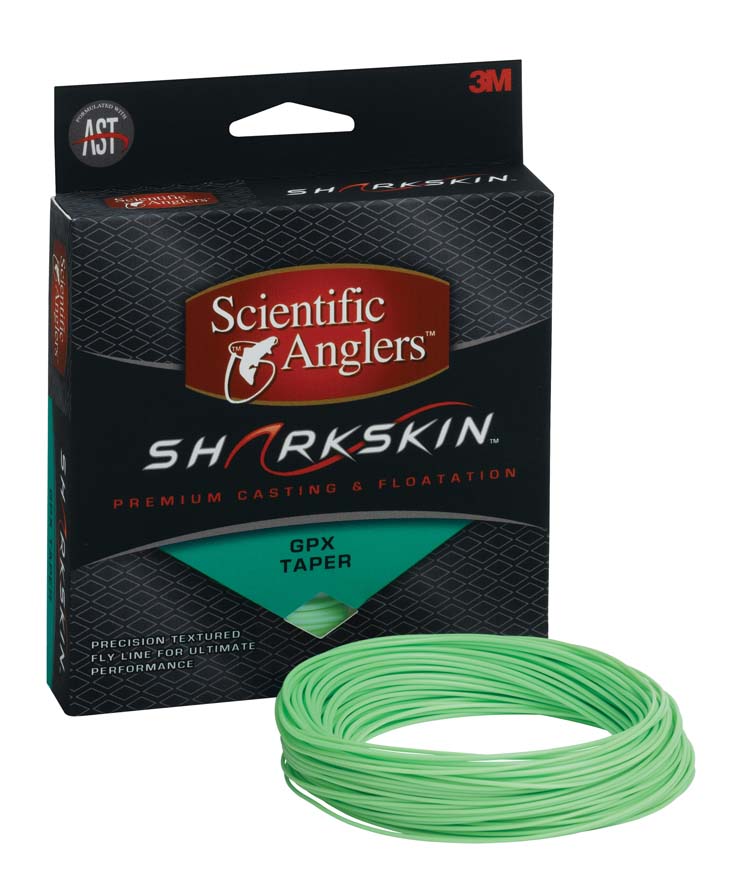 [dropcap]W[/dropcap]hen I started working at The Fly Shop of Fort Lauderdale, Florida, Scientific Anglers’ Sharkskin Fly Lines had only racked up a year of highway miles on its intro-road tour. The reviews, sometimes sageless opines, were helter skelter. The tepid-footed trout lads barking loudly about the zinging in and out “noise” being a threat to all things held sacred and scaring the Hell out of clean shaven trouts. On the pickup truck side, the more hardy and unshaven Billy-Bob saltwater boys claimed the “Skins” lines were sawing off digits. The blogs (a sometimes ridiculous service to mankind) are still pouring in and as you’d expect some are good and some bad, but many are Christine O’Donnell-like ridiculous. However, the volume is still turned way up, but so are Scientific’s Sharkskin sales, as well as their introduction of new generations of sibling ‘Skins’ – so much for negative bloggery 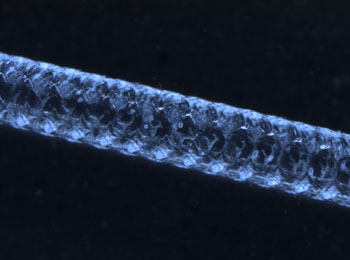 The $100 a coil, it turns out, initiated the negativity. That said, I learned from my mentor-bosses David
Olson and Rick Derrer, respectively Managing Partner and senior partner of The Fly Shop of Fort Lauderdale and The Fly Shop of Miami that the shopper fly fisherman is prone to call-forth his feminine side when it comes price point reactions, taking out their wallets and actually buying something. But in all honesty, not too many fly fishermen I talked to wanted to spend an extra $40 or $50 to “tryout” a new flyline. Never one to take ‘your’ word for it, I finally (six months of mulling with my female side) set out to assuage seven decades of compulsive curiosity. After acquiring a 9-weight and an 11weight Sharkskin, I set out on a three month voyage to prove that “Skins” don’t work, or at least have fatal flaws in one circumstance or more. Locally, I plied the surf near Jupiter Inlet, Florida, for some snook. I also hit the Tamiami Trail a few times, which is Florida’s southernmost state road that connects Miami to the west coast of Florida. It has borders with Everglades National
Park and Big Cypress Preserve. The “Trail,” as it’s colloquially called, can at any given time produce 30-pound tarpon and 8-pound snook. I also fished the local canals in Broward and Palm Beach counties which hold largemouth bass and peacock bass, as well as tarpon, snook and unwanted exotics.

Then it was offshore

Montauk, Long Island, New York for stripers, albies and blues with writer, author, musician and fly fishing pro Capt. Andrew Derr, and lastly, an unexpected chance at a free, short weekend in the Bahamas (fishing in four hours – door to door – from Ft. Lauderdale is possible) for some bones. I stayed with the Skins all the way – waiting for Sharkskin ‘tilt’.

Here’s my take on the “Skins” lines: No one could possibly say that the Sharkskin fly lines can’t cast further, more accurately and with less physical effortthan any conventional flyline – doesn’t matter what your skill level is. Frankly, it’s the best casting fly line ever invented – it casts like a dream. In real-time conditions I can count on an additional 15- to 20-feet with my casts; it’s always windy off Montauk and it’s always blowing 15 or 20 in Florida. But here’s the real joy, especially if your an old bird: pick up off the water is like nothing you’ve ever experienced. It’s effortless with 50 to 60-feet ofline out in chop and a stiff breeze; es no problema. That’s because the line sits much “higher” on the water than any conventional line.

Will it cut or burn your fingers? You bet! It will cut the ‘s—’ out of you fingers going in or out, more so than any conventional line so pay attention. However, a realty check is needed. Any line that’s running through the guides at wahoo speed will cut or at least burn the Hell out of your fingers. “Skins” are not as bad as gel-spun, braided or dacron (Geoff Wilson’s Guide to Rigging Braid, Dacron, and Gelspun Lines – Cardinal Publisher’s Group, April 1999, 42 pages spells out the use and these material, on the proper ways to rig with all the various product types), all of which can get down to the bone in a nano-second, and you’d never feel it until too late. I saw that happen once – not pretty at all – blood everywhere. It looked liked we’d gaffed a tuna. Also, “Skins” do whistle through the guides coming and going because the surface is micro textured – dimpled like a golf ball.

As “Skins” relate to my fishing the surf, offshore, local canals and waterways, and sight fishing the flats, the highly audible sound of whistling out through the guides is a realty – get used to it. Making noise on the retrieve, which I assume is also ‘noisy’, did not seem to effect my fish catching equations at all. I had no trouble in the surf, but the ability to cast further and get easy pick-ups was a feature that was a tremendous advantage as that relates to the number of effective casts made and my endurance. On my Long Island trip with Capt. Derr, the Sharkskin played out to perfection by giving me quick pick-ups and the advantage of quick recasts to the always up and down baits and the following stripers, albies and blues. Fast is the name of the game on Montauk! Iwas far more productive than Capt. Derr’s other client who chose a conventional fly line. All my intermediate trips to the Tamiami Trail, local canals added to my liking of the Sharkskin line. Convincingly, it was the don’t poop-out factor, longer casts, easy pick-ups and more accurate casts. 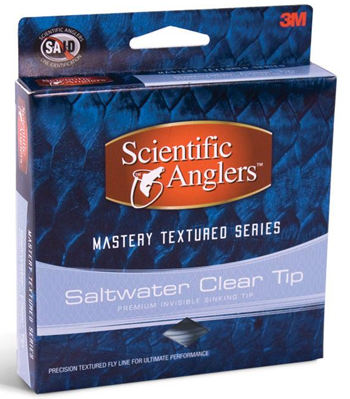 I guess the real test came with my Bahamas leg fishing for bones. Without the slightest hesitation I can say that there’s absolutely no truth to the “noise” factor being negative with Sharkskin lines when bone fishing. My one and a half days of Bahamas bone fishing was a catch and release tally I’ve never before experienced – my best ever! However, I’d rack that up to a flyline that is easy in and easy out, increased distance, improved accuracy, light as a feather pickups, my ameliorated endurance and much less likely to tangle – a great feature on a flats boat. My index finger – lots of duct tape – wow, was it sore.

Del Kaus, New Product Development Department at 3M’s Sports and Recreation Division said: “Micro Replication technology, originally developed for applications on other 3M products, was purposely chosen for fly line application. Essentially, microreplication involved copying Mother Nature as it relates to lotus leaves and spiders – eliminate surface tension by sitting higher on the water – literally walk on water. The Sharkskin line was the first application of microreplication and it took almost three years to figure out how to apply it uniformly to such a small diameter. The surface of a Sharkskin line uses a diamond pattern, which is the reason it can cut you,” Del went on to say: “Over the last few years, our sales, rep and tech guys have talked to professional guides from Alaska to Key West and they unanimously agree that their not so qualified fly fishing clients get at least 15-feet or more out their casts with Sharkskin lines compared to any conventional fly lines. And that, they say, makes the difference between frustrating and catching.” When asked why there’s such a lack of surface tension on pickups off the water when using Sharkskin? Del replied: “The diamond pattern on Sharkskin lines, in order to replicate the lotus leaves and spider effect of waking on water, is found in the ‘Angle of Contact.’ The Sharkskin pattern creates an angle measurement of 130 (a scale measurement used by 3M labs which is not related to degree of angle). Conventional fly lines test at about 90.”

I asked about the new Mastery Flylines that promote Dimpled Texture in their lines. Del explained: “The Mastery series of dimpled lines is a byproduct of the diamond pattern technology, but has a less dramatic contact angle, which is 100, but that still produces the signature benefit of casting further, easy pickup, less angler fatigue and less line tangling. And it is much less abrasive than Sharkskin.” Technically summarizing, Del said: “Both the Skins and Mastery lines have the overall effect of dimpling on a golf ball – a radical modification of typically smooth-surfaced fly lines.The micro textured surface traps air to provide superior shootability and floatation while eliminating line flash and greatly reducing line pick up friction.”

Del said that all of this comes with the added benefit of increased durability – my lines are now two years old, fished a lot – no change planned in the near future. Sharkskin lines are easier to mend, roll cast, and make effortless line pick-ups with less water spray. The floating lines in this series also feature 3M’s proprietary AST and Dry Tip technologies.