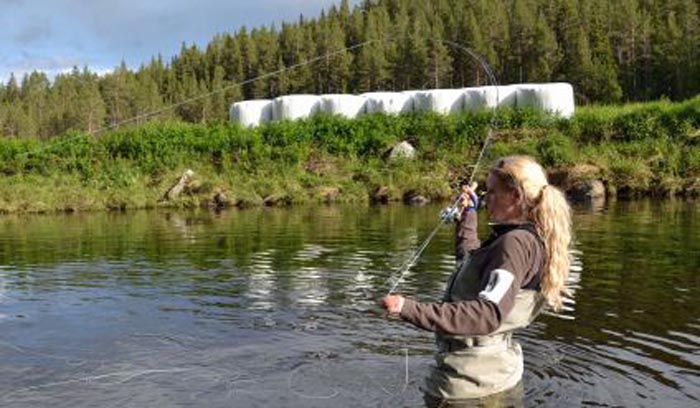 RIO Skagit Trout Max, buy one. You’re gonna’ like the way it fishes

Short Shooting Heads and the Liberation of Humankind There isn’t much room left for criticizing the productivity advantages of short, fat shooting heads used on anything from a small, conventional overhead casting 3-weight to a 12-weight switch rod, or a 14-foot Spey rod.

Ed Ward et al. made swift converts out of those who initially seemed constitutionally incapable of grasping a simple system of letting a short, dramatically tapered fly line do some talkin’ on its own. With the help, of course, of super thin and light running line casting became easier in every aspect of that task. Think more enjoyable, fewer natural deterrents, and less fatiguing for a full day of enjoyment.

So, who else is now in the game of producing these once pooh-pooed short, shooting head fly lines?

Try everybody not in rehab for stupidity.

RIO Products is no stranger to producing fly lines like shooting heads. They’ve been at it for a long, long time, but they didn’t make them as short or as dramatically tapered as OPST – until now.

Always upping their game, RIO has newer entries – Skagit Trout Max, so I gave one, actually three (225 grain, 200-grain, 175 grain) a few lawn spins. I also bought a VersiLeader and a MOW tip to take on a test drive as well.

For the test, my newly acquired, and long coveted Reilly Rod Crafters’ (RRC) Chuck Kraft 5-weight, would be the casting “equipage” concierge. The two RRC fives I’ve had and now have racked up more than two years of intimate association. The first exchange was with a prototype, which passed muster with no performance issues – just cosmetic matters. The “For Sale” version (Chuck Kraft Series), which I now own, has star quality looks and the same built for barroom brawling it always had – a heavyweight fighter but with a lightweight division carry burden.

Pros and Cons: What were they thinking? At only 11-feet long it is the best tight quarters trout fly line out there. It enables water anchoring two-handed casting. Add a VersiLeader and long, regular leader, and you’re out there 30-feet.

All the subject grain weights can be usefully cast on medium and fast fly rods. With the higher weight line (225), there is a distance loss on a 5-weight (RRC/Chuck Kraft), but not significant enough to manage a lower score. That said, on a windy day with a similarly sized fly (bushy/lead eyes), the increased loop spread could quite negatively impact the cast distance, and probably influence accuracy the same way.

However, an underskilled caster would appreciate the 225 grain simply because of feeling the line loading the rod.

The 200 grain, a perfect 10 and no fears of the rod or line damaging, by themselves, performance due to fly size or wind, or show any discomfort with either a MOW tip or VeriLeader added on.

The 175 grain performed without an issue in any respect. However, there was almost no wind during the entire test (2 hours). We were both able to hit the ring at 50-feet with more regularity than with either of the other Trout Max lines. A wind issue would surely negate the lightness of the 175 grain Skagit Trout Max.

NOTES: No wind during the two hour test period. Testing was on a manicured lawn in Atlanta, Georgia.

The casters, myself and Angie Roth. Angie used to prosecute bad people, then, free the innocent. Now, she complains about everything, and is a lifetime fly fisher with considerable skills. Angie’s Sage One 5-weight (her favorite child), cast all three RIO lines with similar outcomes, but better with the 175 grain than the RRC Chuck Kraft. NOTE: Angie, after our lawn gig, ended up buying a RIO Skagit Trout Max fly line for her Sage – along with leader and tips. CLICK ON IMAGE TO LEARN MORE or scroll down and watch shortt video.

Con: The RIO running line tended to want to tangle, an issue that didn’t go away in a “game on” wet environment. The Lazur running line by OPST is better. The problem is significant enough for me to make a change out.

Pro: The RIO Skagit Trout Max fly line adds measurably to any fly rod built for  trout fishing. It was primarily designed for light two-handed and Switch rods, and just as capable with single-handed rods.

Featured Image is Anita Maria Strand, one of the most accomplished female fly casters in the world, with six World Champion titles, four Nordic Champion titles and multiple Norwegian Champion titles. Anita is also an enthusiastic amateur photographer with a keen sense for exceptional pictures.