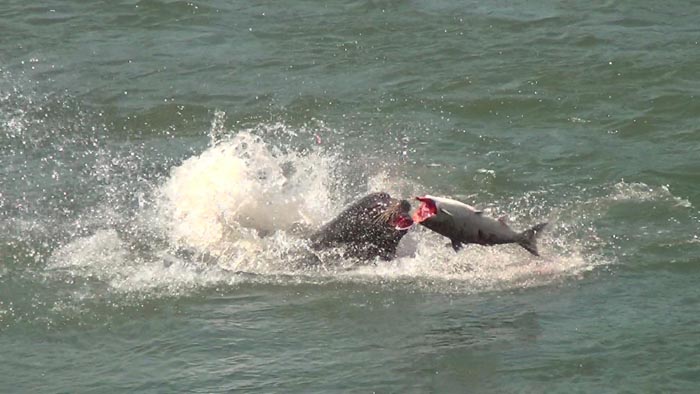 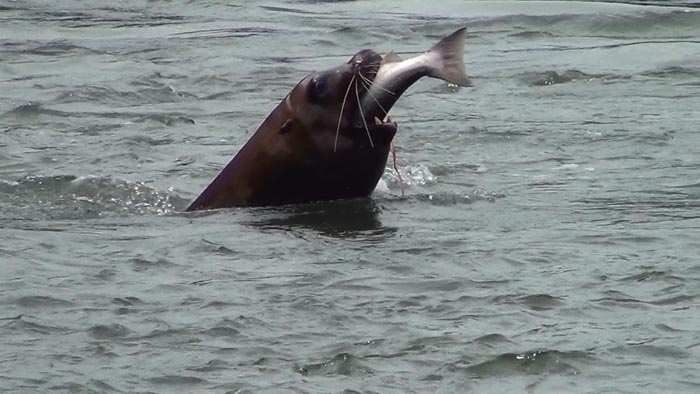 California and Steller sea lions travel 145 from the mouth of the Columbia River to Bonneville Lock and Dam to eat returning adult salmon as they enter the fish ladders. Sea lion are a major source of salmon mortality when they prey on migrating fish at the dam’s fish ladder. In 2008 NOAA Fisheries authorized Oregon, Washington and Idaho wildlife authorities to begin trapping and removing sea lions shown to repeatedly prey on salmon at the dam. The removal program was designed to reduce impacts on protected salmon. Photo courtesy U.S. Army Corps of Engineers.

The Endangered Salmon Predation Prevention Act, S. 3119, passed Congress on December 11, 2018, and was signed into law on December 18, 2018. This new law amends section 120 of the Marine Mammal Protection Act (MMPA) to provide more flexibility to states and tribes to remove sea lions that threaten species of salmonids and other fish listed as endangered or threatened under the Endangered Species Act (ESA) in the Columbia River and its tributaries.”

Why are sea lions a concern in the Columbia River?

Sea lions in the Columbia River prey on stocks of salmon and steelhead listed as threatened or endangered under the ESA. The problem is especially serious below Bonneville Dam where salmon and steelhead are more vulnerable to predation as they congregate before passing through the dam’s fish ladders to migrate and spawn upstream.

Since 1975, when the California sea lion population was estimated at 88,924 animals, their numbers have boomed, and it is estimated there are now approximately 257,631 animals. The growing population of sea lions is having a negative impact on salmon and steelhead returns. At Bonneville Dam, from 2002 through 2018, (California sea lions, Steller sea lions, and harbor seals) have consumed an estimated 71,000 salmon and steelhead, representing 0.35 percent (2002) to 5.5 percent (2016) of the total salmonid passage. According to these trends, we are concerned continued predation at such rates could drive at least some of the threatened and endangered salmon and steelhead runs to extinction.

Why is lethal removal needed to reduce pinniped predation on salmon in the Columbia River?

Sea lion predation in the Columbia River and its tributaries is one of many challenges facing the survival of these fish.  Since 2008, the Columbia River Inter-Tribal Fish Commission have conducted a boat-based ‘hazing’ program to help deter predatory sea lions from congregating salmon and steelhead below Bonneville Dam. The U.S. Department of Agriculture’s Wildlife Service also administers a dam-based “hazing” program at Bonneville Dam. However, these efforts have had limited success because the sea lions usually return within a few hours after the hazing teams depart.

Before an animal is lethally removed we make an effort to place captured animals in zoos or aquariums that have available space.

Who is eligible to apply for a permit to remove sea lions?

Under this new law, the states of Washington, Oregon, and Idaho (states), and the Nez Perce Tribe, the Confederated Tribes of the Umatilla Indian Reservation, the Confederated Tribes of the Warm Springs Reservation of Oregon, and the Confederated Tribes and Bands of the Yakama Nation are eligible to apply for a permit from NOAA Fisheries to remove predatory sea lions on the Columbia River and specified tributaries. The bill also authorizes the states to enter into agreements with these tribes to control sea lions. The geographic area includes the Columbia River from river mile 112 to McNary Dam and its tributaries in the state of Washington and Oregon.

Since 2008, the states have had a permit to remove a limited number of predatory sea lions at Bonneville Dam. The Oregon Department of Fish and Wildlife estimates that sea lion removals at Bonneville Dam though 2018 have prevented the loss of 30,212 to 36,848 salmon and steelhead. In November 2018, we issued the State of Oregon a second authorization to remove predatory sea lions at Willamette Falls.

What does this law change?

The law also streamlines the process for the eligible states and tribes to remove sea lions by changing the eligibility criteria from a rigorous, data-intensive process to a geographic-based eligibility. Under this law, NOAA Fisheries must ensure that, cumulatively, no more than 10 percent of the potential biological removal level (PBR) be removed. The PBR, as defined in the MMPA, is the number of animals that can be removed each year without affecting the sustainability of the marine mammal population as a whole. The existing permits at Bonneville Dam and Willamette Falls allow for removal of up to one percent of the PBR.

This law does not change existing application procedures that were part of the 1994 MMPA amendments. Permits for the temporary removal of predatory sea lions are still authorized for up to five years.

How many sea lions can be removed under this law?

NOAA Fisheries is required to ensure that permitted entities remove (this includes transfer to zoos or aquaria, as well as euthanization) no more than a combined total of 10 percent of the PBR.  The current PBR for California sea lions is 9,200 animals. Therefore, a total of up to 920 animals could be removed each year under the new law.

What is the long-term impact of this law on the sea lion population?

The removal of specific sea lions from the Columbia River and specified tributaries will not impact the sustainability of the California sea lion population.  The strategic removal of a limited number of predatory sea lions will not adversely impact the population. According to a recent NOAA Fisheries story  and report, the California sea lion population is healthy and flourishing along the West Coast, numbering more than 257,000 animals.

What else are NOAA Fisheries and its partners doing to recover threatened and endangered salmon and steelhead in the Columbia Basin?

The states, tribes, NOAA Fisheries, and U.S. Army Corps of Engineers, along with many other agencies and organizations, have undertaken a large number of actions aimed at reducing the losses of ESA-listed salmonids in the Columbia River Basin to achieve long-term recovery and associated societal and cultural benefits.  Together we have completed  recovery plans for lower Columbia River salmon and steelhead, middle Columbia River steelhead, and upper Columbia River salmon and steelhead. These documents present well-vetted and scientifically-informed plans for restoring the fish populations and the habitats upon which they depend to healthy levels.

These recovery plans and other combined actions represent an extraordinary and unprecedented cooperative effort in the Columbia Basin to protect and recover salmon and steelhead. Recovery plans have been developed and are being implemented in every watershed, including actions to: restore important habitat; improve dam passage survival; reform hatchery programs consistent with the recovery of wild populations; and reshape fisheries to limit fishery-related mortality of ESA-listed populations and focus on selectively harvesting healthy stocks. These efforts equate to hundreds of millions of dollars invested annually and billions over the past decades.