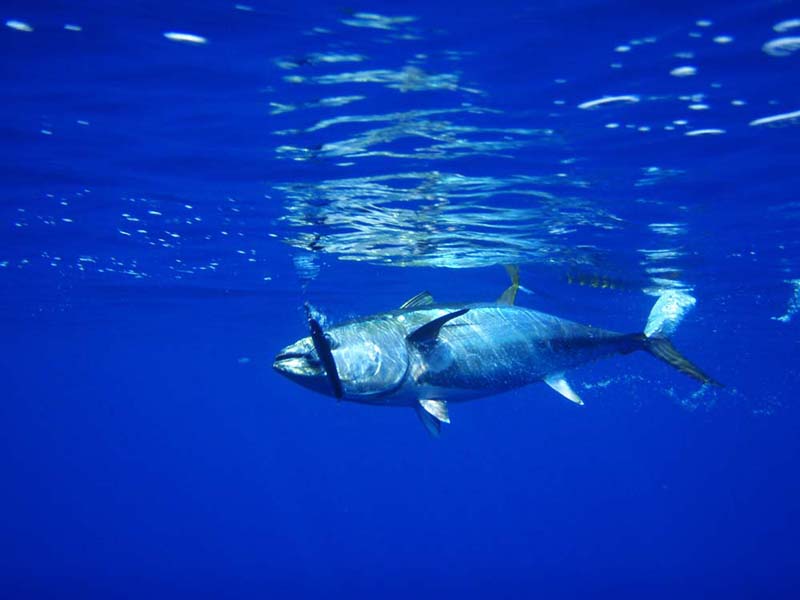 Sorry kids, we’re not safeguarding the world’s largest tuna fishery for you – you’re on your own

by ARC Centre of Excellence for Climate Extremes

Understanding the impact of modern fishing techniques is critical to ensure the sustainability of the Western and Central Pacific Ocean (WCPO) tuna fishery—the largest tuna fishery in the world that accounts for 55% of the total tropical tuna catch and provides up to 98% of government revenue for some Pacific Island nations.

Multiple agreements have been signed by Pacific island countries and territories to maintain the sustainability of this important ocean resource. However, the advent of Fish Aggregating Devices (FADs) and their impact on fishing efficiency over the past 20 years has added a large unknown to the management required to maintain the sustainability of this key fishery into the future.

Too many fishing vessels chasing too few fish

Researchers from The Pacific Community’s Oceanic Fisheries Program (SPC) and the ARC Centre of Excellence for Climate Extremes have recently published two papers that used a combination of records from captains and scientific observers, FAD tracking data, ocean models and cutting edge simulation methods to reveal for the first time the trajectories and potential impact these FADs may have on fisheries and the island nations.

“Around 30,000-65,000 FADs are released every year in this region but we have very little understanding of where they ended up, how they were being used, and the impact this has had on coastal areas and the overall catch of the fishery,” said Dr. Lauriane Escalle, a fisheries scientist at SPC.

“While we know FADs make fishing more efficient, allowing fishing vessels to use less fuel and reduce fishing effort, there are unanswered questions around potential overfishing, impacts on bycatch species, ghost fishing and reef damage caused by FADs washing up on coral reefs and islands.”

Aside from catch data and ocean models, modern FADs themselves played an important role in helping the researchers get their answers

Traditional FADs work because ocean-going species, like tuna, tend to aggregate around floating objects like floating logs. Why they do this is still not fully understood but fishers have long known this fact and taken advantage by releasing bamboo rafts into the ocean—the world’s first FADs. Over time commercial fishers added old ropes and nets to slow the drift through the ocean.

Today, FADs are high-tech buoys with solar-powered devices that record the position, scan the ocean below to estimate the number of aggregated fish and transmit all this information to vessels via satellite. This modern technology opened the door to detailed observations of FAD life history while they drift across the Pacific.

Combining this real-world information with catch data and cutting-edge simulations based on ocean models allowed the researchers to examine the dynamics of FAD connectivity and to test different hypotheses explaining the high number of FADs beaching incidents in some areas. This key information could significantly add to the management of the Western and Central Pacific Ocean tuna fishery and the exclusive economic zones within it.

The studies found that:

Access to this unique regional database of FAD tracking data by fishing companies and managers allowed us to not only validate ocean models but also to test different deployment hypotheses using millions of virtual FADs, another fisheries scientist at SPC.

This method allows us to look back in time and make good estimates of the movement and impact of FADs from before tracking programs, as well as examine their potential impact on tuna behavior.

This collaboration between fishing companies, regional management organizations and researchers has resulted in an extraordinary amount of useful data that will go a long way towards helping Pacific island nations and the fisheries managers maintain the sustainability of this valuable $6 billion a year industry. It’s a great example of managers, industry and researchers working together for the benefit of all.”