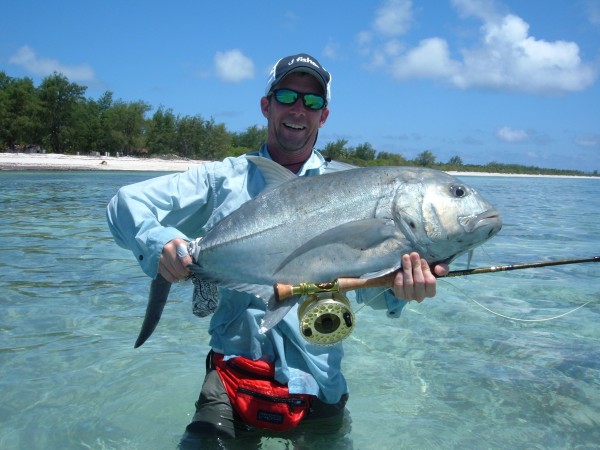 Seychelles: A look back at the trip of a lifetime (Pt. 1)

[dropcap]L[/dropcap]ooking back on my good fortune during the March of 2007, I can’t believe I got to go fish such an amazing place and even get paid for it! Urban Angler, in New York City, had arranged and run tons of 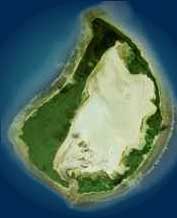 The island of Astove. I could live there.

trips to the Seychelles aboard the converted Dutch research vessel, the 116′ Indian Ocean Explorer. Generally, they’d get 12 anglers, hire two hosts and then have the ship’s two 18′ tenders and crew at their disposal. This particular year, Capt. Amanda Switzer was supposed to again host the trip but luckily, I got the late call with the news that she and her husband, Steve, were expecting their first child. I giddily accepted and having never been, had to rely heavily on the advice and experience of both, the Captain of the Explorer and my fellow host from the US, Captain Bryan Goulart, to help our angling guests fulfill their wildest fishing dreams. We were extremely lucky with the conditions and weather and had some of the most indelible experiences imaginable. We flew in to Mahe and then to the tiny Assumption Island where we boarded the ship amidst moderately windy conditions.

We embarked that night in rough seas to awake to a stunning wonderland of flats, islands, and atolls at the island of Astove. It was a virtual amusement park of fishing adventures both on the flats and the starkly contrasting deep blue water just a stones throw off shore. This island is surrounded by flats and has a expansive, shallow lagoon right in the middle of the island that is tidally fed through a channel on the south end. There are really a ton of options on Astove. A short hike through the forest, still chock full of huge tortoise’ from long ago settlers there, leads you to the inner lagoon which is teaming with very gullible bonefish. We would return to this lagoon a couple times over the next few days but this day we were concentrating on the outside flats. 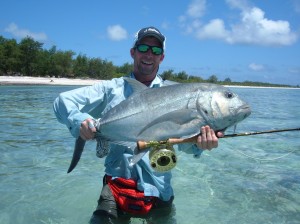 Making the most of 30 minutes of fishing off the west side of Astove.

The simple act of watching and fishing the incoming tide on the west side of the island is astounding. I stood on the dry flat as water began to lap up onto it from the deep blue water depths just in front of my toes. With the crystalline water came little minnows and then bigger baitfish. Then came brightly colored reef fish, the likes of which I had never seen. Then a few bonefish started to dart up on the flat when a little swell allowed for it. For two and a half hours we slowly backed up with the incoming tide until it was teaming with bonefish, giant trevally, bluefin trevally, barracuda, milkfish and a ton of other fish I had definitely never seen on the flats before. This place is like Jurassic Park for fly fisherman.

That particular experience stands out as the singular coolest fishing experience I have ever had, and I only fished it for about 30 minutes, spending most of that time that morning helping our clients connect the dots. I probably made eight casts to cruising GT’s during the last of the incoming tide and had large fish aggressively competing for my #3/0 day-glow seaducer  on each cast. Watching them charge on it in shallow water is so incredibly adrenaline inducing and quite a site to behold. Fighting these behemoths is a true test of one’s tackle, knots and fish fighting skills for sure. During that time, everyone in our party seemed to get lost in their own section of this huge flat, with enough cruising targets to keep 50 anglers occupied. Having never fished or guided this flat before, I will say honestly, it was a piece of cake. It is amazing what a lack of fishing pressure does to improve a fish’s appetite. Everybody had a field day that morning and headed back to the boat for lunch afterwards grinning ear to ear. On our ride back to the Explorer on the inflatable tender, I looked back at the palm trees on shore and the sun , now high over the island of Astove. This amazing feeling I only get from sublime natural wonders came over me. The long hours of travel and jet-lag were gone from my thoughts. We were in IT and we had five and half more days to explore this saltwater fly fishing mecca. 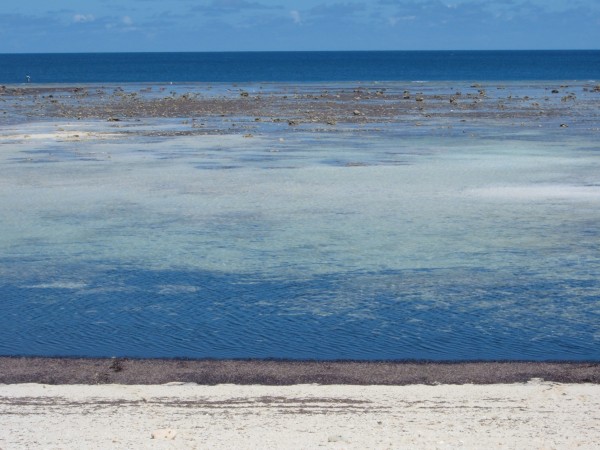 The flat on the west side of Astove at low tide. Oh, what joys the tide will bring…

Stay tuned for more of mothership adventures from the Seychelles…