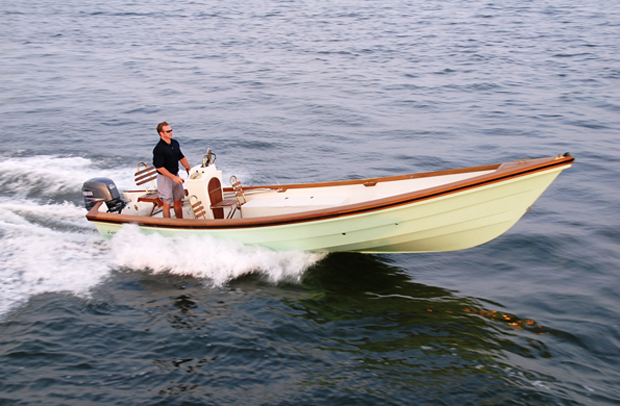 [dropcap]A[/dropcap]s most know, there are many exceptional skiffs being built today – survivors of a recession by tough as nails, hands-on builders who are guided, sometimes, more by passion than by business 101 orthodoxy.

Getting everything out of one skiff is just like the man said. A skiff, like any form of human conveyance, is a study in compromise. And so it is with the skiff we’ve chosen to profile. It’s easy to fall in love with the Caribiana 23 because of its the look and feel, and that has little to do with hi-tech aspects of the skiff.

The design of the Caribiana 23 is almost ancient. In poor countries around the world, narrow boats mean requiring less horsepower to go fast which translates into using less fuel.

Those of you that have ventured to an out-island in the Bahamas or been to the Yucatan will recognize the hull shape of the Caribiana as being a “work” boat, fishing boat and passenger boat. These skiffs literally slice through the water, advantaging the high bow and narrow beam.

Copied from the older designs found in the Caribbean and elsewhere, the Caribiana 23 can hit speeds of 30 MPH with as little propulsion as a 50 HP motor, and run all day on less than a tank of gas. As for stability, the 23’s limited abeam width of 6-foot, 6-inches is helped stabilized by its LOA of 22-feet, 6-inches – safe enough, in fact, for near-shore bluewater on a good day. However, if you’re used to the common wide beam designs of today’s “flats” boat, the Caribiana 23 may feel slightly tippy. We did not find  the latter to be the case.

The draft is anywhere from 9- to 11-inches, depending on build options. The only negative is that on sharp turns you can ventilate the motor if you don’t trim the motor all the way in or lowering it on the transom.

The Caribiana is made in Pensacola, Florida by the Caribiana Sea Skiffs company. Each build takes at least a month or or more. The list of options are almost endless. Curt Morse, the company’s owner says they’re totally geared to one-off every boat they build. Pricing is anywhere from $20,000 to as much as $70,000 for a totally tricked “23 Signature.”

“I grew up in the Delta riding around in a duck boat,” says Curt. “That’s what this boat is. It is a boat that doesn’t require a huge skill set, that anyone can get on and go anywhere.”