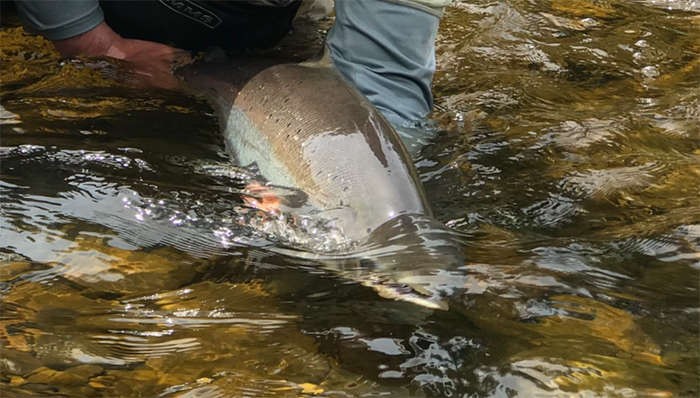 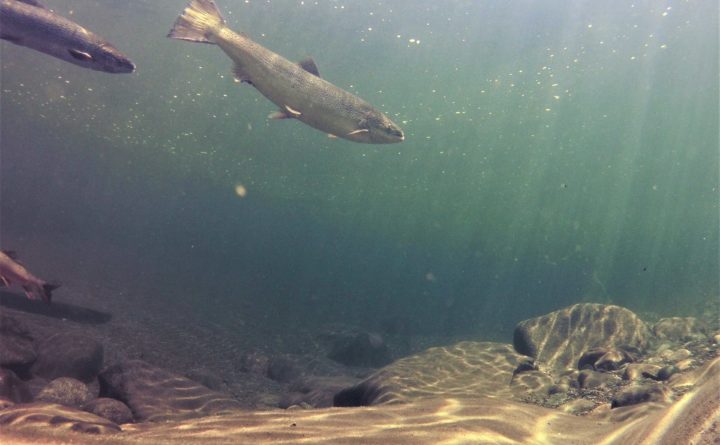 “Charlie” the Atlantic salmon (right) swims among other salmon in a pool of the Sandy River in western Maine. Charlie is a repeat spawner, and was captured twice at Waterville’s Lockwood Dam, exactly two years apart. Casey Clark/Maine Department of Marine Resources.

The ‘mind-boggling’ journeys of one Atlantic salmon

Your morning commute to work might be hectic and harrowing, but before you start feeling sorry for yourself consider the journeys that Charlie — the name given to a soon-to-be-famous Atlantic salmon — has taken over the past few years.

[dropcap]C[/dropcap]harlie recently was captured in a fish lift at the Lockwood Dam on the Kennebec River in Waterville. That on its own is not a surprise. The fact the adult salmon was actually what’s called a “repeat spawner” and had been captured at the same facility exactly two years (and thousands of miles) earlier was grounds for celebration.

“This is the only repeat spawner we have ever had [in the 13 years since the Lockwood facility has been operational],” said Paul Christman, a marine scientist for the Maine Department of Marine Resources.

Christman said that over the course of a year, all of Maine’s salmon rivers might see one repeat returnee, most of those counted on the state’s busiest salmon river, the Penobscot. This year, more than 1,000 salmon have returned to the Penobscot. Just 56 have been counted at Lockwood. Making Charlie particularly intriguing is the fact he’s either a naturally reared fish from eggs planted by fisheries personnel or a wild-spawned fish.

And the journeys that Charlie has made are mind-boggling, Christman said: 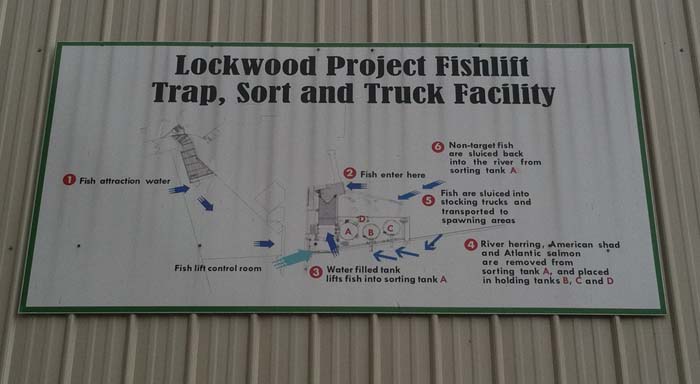 Jennifer Noll, another DMR fisheries scientist, reported that when Charlie was captured two years ago he was almost 29-inches long. Now, he measures nearly 34-inches from snout to tail.

Christman said many fish die in their natal rivers before even heading to sea once, and they face countless challenges while in the ocean. Upon their return to a river, they must overcome more obstacles and survive predators that would like to enjoy a salmon dinner.

The fact Charlie has made those grueling, life-threatening trips twice makes him a rare fish indeed

“He has defied all the odds. He has actually survived an enormous amount of mortality,” Christman said. “He is at least two years older, three years older than all the other [salmon] in the Sandy River. This guy has seen it all and survived. It really is amazing.”

Christman thinks Charlie successfully spawned two years ago — spawning redds were found near where he was hanging out — and hopes he is able to do the same this year.

Passing along his genetics to future generations can’t hurt, after all

“This guy really wins. I mean, he’s got it all,” Christman said. “It’s really amazing to see a fish that has been through it all and survived [all of those threats]. I just can’t fathom.”

This Atlantic salmon — a repeat spawner — was captured at Lockwood Dam in Waterville recently, exactly two years after it had been previously captured at the fish lift there. It was again trucked to the Sandy River, where a tracking tag indicated that it spawned in 2017. Photo credit – Maine Department of Marine Resources.