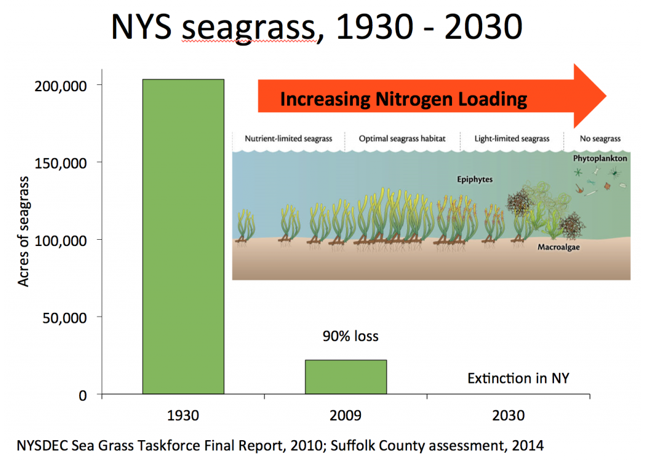 The State Legislature is only in session for one more day up in Albany.    There is only a day left to bring to the floor (and pass!)  The  Long Island Water Quality Control Act A.9788A/S.7804.    The future of Long Island’s bays, rivers and ponds depend on it.   Our drinking water depends on it.

The bill establishes pollution standards for residents, businesses, and agriculture , standards we are going to need in place if we are to save our waters and build a sustainable Long Island.

There are of course certain constituencies who don’t want to see this bill passed because it would force them to change how they do business — what they can put on the ground, in the air, in the water, what they can build where, what new water quality regulations they’d need to follow.

But two things about building a sustainable Long Island :

1.  It will take billions of dollars to achieve this.   That in itself should be a boon to builders, to companies seeking to adopt sustainable practices for the good of all Long Islanders, and with that their businesses.

It is urgent then that you contact your state senator’s offices and let them know that you want them to vote ‘yes’ on this bill.

This bill comes to the New York State Legislature within a much larger context.    In the 20 months since Sandy we have learned a great deal about how destructive excess nitrogen in our groundwater has been to all our marine and aquatic habitats.   We’ve learned that we have lost most of our marshes and eelgrass from this excess nitrogen, making us more vulnerable to flooding.      We have come to understand that with that loss of habitat has come the collapse of  our fish and shellfish populations.   We increasingly come to understand that we must address our water quality issues immediately if we want our children and grandchildren to have a chance to enjoy swimming, fishing, clamming, boating, encountering nature here as we had.

Today, we must do whatever we can to slow down the damage while we plan and implement the massive repairs this environmental disaster will require.   500,000 septic tanks and cesspools.   Two antiquated sewage treatment plants in Bay Park (nearly destroyed by Sandy) and Bergen Point.   Then there’s the 195 local sewage treatment plants in Suffolk alone.  A problem that scale is going to take 10 years and 10 billion dollars, one would imagine.   So what do we do now and today to ‘hold the fort’ while the bigger problem is dealt with?   This bill, The Long Island Water Quality Control Act, can buy us time by setting nitrogen standards and putting in place policies that will help us decrease the nitrogen load on our waters and drinking water.   If we do nothing, at this rate it is predicted that by 2030 marsh grass will be extinct here. We know there’s a direct correlation between the nitrogen contaminated ground water on Long Island, the product of population explosion and a building boom post World War II, but with only 30% of Suffolk County sewered. Right now, not coincidentally, The New York State Department of Environmental Conservation lists all of Long Island’s waters as ‘impaired.’    Here is what this bill is meant to do in my view — make everyone, farmers, builders, businesses, residents — part of the solution so that we can buy the time we need to build a sustainable Long Island. It will take 10 billion dollars over 10 years possibly to address the 500,000 septic tanks. In the meantime, we must do what we can to decrease the nitrogen loads.

In recent months, we have come to see the writing on the wall and are together trying to do something about it.   Suffolk County’s release of The Comprehensive Water Resources Management Plan January 24th of this year, updated for the first time since 1987, told a grim story of how degraded our marine and aquatic environments had become, and how our drinking water is also threatened by the nitrogen coming from hundreds of thousands of septic tanks, from 117 different pesticides, from pharmaceuticals flushed down the toilet, from hazardous household and industrial waste.   With that, Suffolk County sprung into action, with County Executive Steve Bellone (D) calling nitrogen pollution the biggest challenge Suffolk County has faced in generations. Right at the same time, Ed Mangano (R), The Nassau County Executive, was coming to the same conclusions about nitrogen and its destructive effects and habitat and its threat to water quality. Both our Senators Gillibrand and Schumer began championing the issue of water quality and sustainability on Long Island, with Senator Gillibrand working with the county to secure a $500,000 award from IBM Smarter Cities to develop a plan for how Long Island can manage its waste water and drinking water so that it could become sustainable

In May, Governor Andrew Cuomo called for 4 public forums on the issue of Long Island Water Quality and Coastal Resiliency, three of which have already been held and which have been reported on in The Huffington Post as part of the continuing series, Can Long Island Be Saved? This Long Island Water Quality and Coastal Resiliency Task Force, bringing together the best scientists from the local, state, and federal levels, and from the major research institutions, non profit, and corporate entities seeking to create solutions to our waste water problems, will, it is contemplated, help spur an entire industry on Long Island, waste water remediation, which Stony Brook standing as a global hub for these emerging technologies. With the

Now here in June IBM Smarter Cities releases it preliminary report tomorrow, and with that we may have in hand a viable strategy for how Long Island can protect and recover its waters. On the very day The New York State Legislature is to decide on whether to vote on protecting Long Island’s waters, we will have IBM’s initial findings on what we can do. All said, what ever the vote — or non vote — we should all look to combine the insights garnered from the Governor’s Task Force with IBM’s Smarter Cities report. It is hard to imagine that taken together they wouldn’t be recommending something along the lines proposed in the pending legislation — a comprehensive approach where all stakeholders need to be part of a broader solution. In any case, science and wise policy must prevail. Sustainability has ‘nothing to do with business as usual,’ but will — with the best minds New York can assemble — point the way to revitalized Long Island.

This bill, sponsored by State Senator Kenneth LaValle (R- Port Jefferson) and Assemblyman Robert Sweeney (D-Lindenhurst), would bring us closer to a sustainable Long Island.    Change is necessary.  But that said, if we have the public and the political will, if we can see beyond the short term concerns that step in whenever there’s change, we can vote for a better Long Island, one for our children and grandchildren.    We are truly all in this together, from our bays to our drinking water to our whole quality of life.