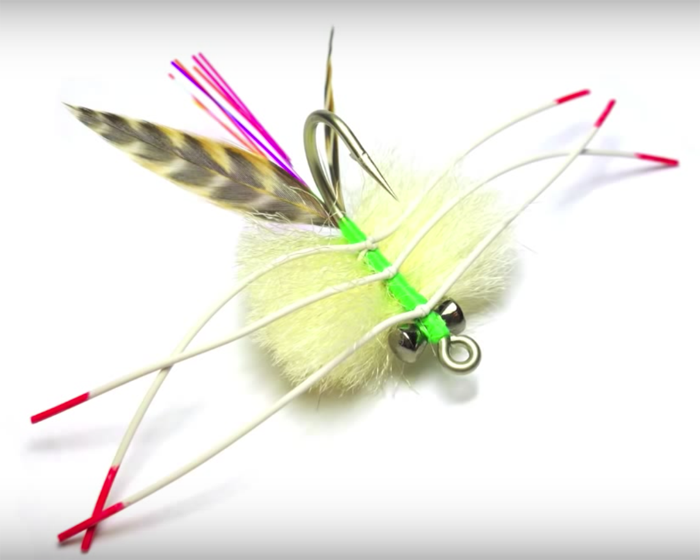 The briny flats without a Merkin? Never

[dropcap]I[/dropcap] got invited to go to the Bahamas – a last minute thing by my friend Angie Roth. She, her sister and a classmate friend from UVA, and me. I knew all of them. Three lawyers, three opinionated women, three divorcees and me. I told Angie no thanks; I had an appointment to fall off a ladder into broken glass.

She was very understanding and got to the actual point of why she included me, knowing I’d never go nor was I wanted. She needed a bunch of flies for the trip – her sister also fly fished. The friend did not.

I agreed to be the “dealer” and in return got an invite, which I expected, to fly fish Roth’s family retreat in North Georgia while they were gone.

Angie knew what she wanted, Merkin crabs. Two colors, three hook sizes, not the yarn type (original), just the EP fiber, or my tube fly versions. She wanted “her” Del’s Merkin – rubber legs and all.

I only had a few days, my material inventory needs wouldn’t cut it and two local fly shop phone calls later I was still stuck

After losing a day, I remembered InTheRiffle. They would surely have the Merkin video on YouTube, and they always say at the end of their videos that they have all the materials used in the video.

First, the Merkin video – EP fiber version. Voilà. Second, all the material. Yup. I ordered and added next day. Third, tied 25 flies that included five tube versions to pi%@ Angie off. Four, delivered the night before they were leaving and got stuck listening to three heavyweight drinkers’ gibberish. But, hey, they were happy.

The flies turned out so good and did killer work on the big bones of Grand Bahama, and, unexpectedly, two generously sized permit.

Here is the InTheRiffle video I used for tying Angie’s Del’s Merkin Crab. Note: Substituting hook, thread, or glue does not affect the fly’s potency, but an off-color thread would. I think?

Glue: Brush On Zap A Gap