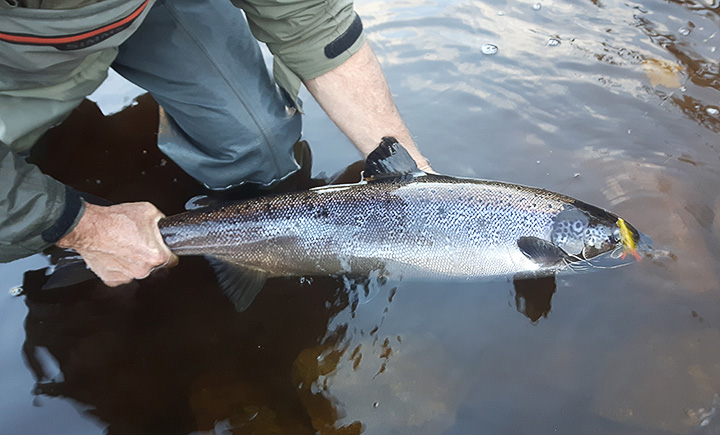 Research fisheries biologist Tim Sheehan was in Qaqortoq, Greenland with collaborator Jon Carr Vice President of Research and Environment for the Atlantic Salmon Federation tagging adult Atlantic salmon with special pop-off satellite tags. These special tags will help collect information about adult salmon movements and behaviors in and around Greenland, and during their migration back to their home rivers to spawn. Here’s what Tim’s reporting.

[dropcap]F[/dropcap]or ten days in October, NOAA Fisheries biologist Tim Sheehan spent 6-8 hours each day with a local fisherman trolling slowly in Igaliko Fjord in southwest Greenland, hoping to capture pre-adult Atlantic salmon. Their plan: capture and release all fish alive with a pop-up satellite tag attached to as many as possible, and hope the tags stay on between 5 and 10 months, recording the environmental conditions and the animal’s behavior in the waters around Greenland and during their journey home.

. . . the Atlantic Salmon Federation (ASF) and the North Atlantic Salmon Fund (NASF) have reached an agreement to essentially buy out the commercial nets off of Greenland such a heartening development. Atlantic salmon were in dire need of help. And now they’ve gotten it.

To be sure, Atlantics face all sorts of threats: Dams in the rivers of the U.S., recreational overharvest in some parts of Canada, a booming—and voracious—population of striped bass in the Gulf of St. Lawrence that feasts on young salmon, the devastation wrought by salmon aquaculture, and warming ocean waters. But perhaps the most direct hazard to Atlantic salmon stocks in the North Atlantic has been the commercial harvest that takes place each winter in the species’ oceanic feeding ground off the coast of Greenland.

Atlantic salmon are an endangered species. Once common in many rivers and streams in the Northeast, they are now found in only a few rivers in Maine. Adult Atlantic salmon return to the rivers where they were born to spawn after spending up to two years at sea, part of that time in the waters off Greenland. Our ability to increase the number of spawning adults partially depends on understanding more about where they go and what they do while at sea, including time spent around Greenland.” — Monte Burke / Forbes

Marine migration of Atlantic salmon is still a mystery. Researchers have a “big picture” understanding of where they go – from rivers to the Labrador Sea to Greenland and back – but don’t know the details. 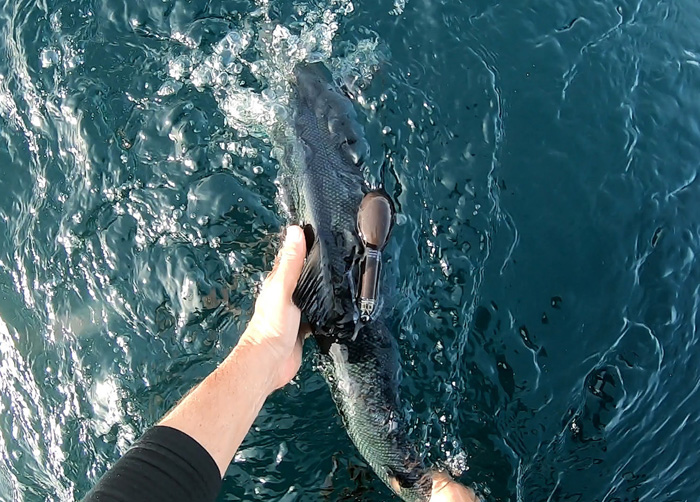 Salmon tagged and ready for release.

“We tagged 12 adult salmon with satellite tags during our 2018 effort, which was lower than we hoped for,” said Sheehan, an Atlantic salmon researcher at the NOAA Northeast Fisheries Science Center’s laboratory in Woods Hole, Mass. “The local fishers were talking about this being a poor salmon year in the Qaqortoq region, but this doesn’t appear to have been the case elsewhere in Greenland. That highlights the region-specific dynamics of the species in Greenland, which we really don’t know much about and is one of the many reasons we are doing this study.”

Sheehan and other NEFSC salmon researchers are not alone in their efforts. They are partnering with the Atlantic Salmon Federation (ASF); Vice President of Research and Environment Jonathan Carr arrived in Greenland a few days before Sheehan and deployed a few different types of traps to try and passively catch salmon. ASF was also able to involve local fishers from the Association of Fisheries and Hunters in Greenland (KNAPK), who provide local knowledge and assistance. Rounding out the team are researchers from Fisheries and Oceans Canada. 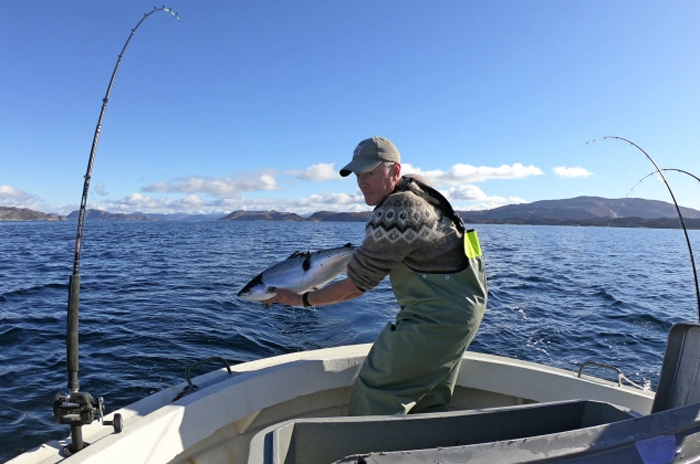 Tagging efforts will help researchers understand the marine migration dynamics of salmon returning to natal rivers from Greenland. Answers to questions like how many survive, where do they go and when do they get there, what environmental conditions do they prefer, and who predates on them and at what rates, will enable Sheehan and colleagues to ask more specific questions and to estimate future impacts from a changing climate. Tagging adults in Greenland compliments ongoing NEFSC efforts to tag smolts in Maine rivers with ultrasonic tags to investigate their early marine migration as they leave natal rivers and start to migrate to Greenland.

Slow fishing equals long days, an unpleasant development this year. During exploratory fishing in 2017, Sheehan and the local fisher he works with hooked 11 salmon and landed 7 during 10 hours of fishing. In 2018, the pair fished for 70-80 hours and landed 14 fish.

“That is why they call it fishing, and not catching,” Sheehan said. He and colleagues tried different capture options, but trolling was the most successful by far and will be their primary method moving forward.

“Considering we didn’t deploy all of our tags this year, we have a start on next year’s equipment list as the tags can be reprogrammed and used in 2019,” Sheehan said. “This year was a good start. We settled on our capture method and worked out some of the kinks of capturing, tagging, and releasing an Atlantic salmon on a small fishing vessel in Greenland. We have a few ideas to help streamline the process for 2019. We hope to get some good migration data back for the tags we deployed this year, and we plan to deploy more tags next year. Every little bit helps.” 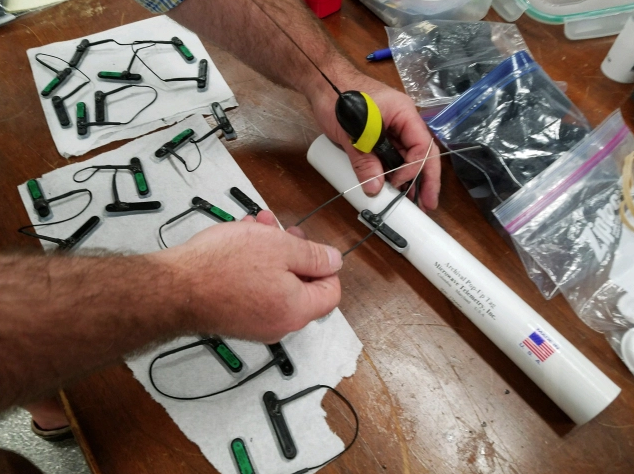 The fishing season for Atlantic salmon in Greenland is August to October. The fish grow very fast during that time, so focusing tagging efforts later in the season meant obtaining bigger fish to tag. Working with bigger fish is beneficial as the fish are more robust and likely able to handle the impact from the attached tag, known as a PSAT (pop-off satellite tag), better. Next year, Sheehan says they will try to extend their late season capture and tagging window by sending one person for two weeks and then another for two weeks, with little overlap to capture and tag as many larger fish as possible.

The tags Sheehan and colleagues are using are programmed to “pop-off” or release after either five months or ten months. Once released, the tag will float to the ocean surface and transmit its data to passing Argos satellites, which in turn send it to a ground station and to the researchers.

A previous three-year tagging project, in 2010-2012, put out 25 tags but only about half reported back. Of those, two tags lasted 9 months, three were lost to predation, and eight tags popped off within 30 days of being attached.

Learning from the Past

“I wanted to get all the data we did receive analyzed and learn from that first tagging effort before putting out another group of tags,” Sheehan said. “We learned a tremendous amount from that effort and collected a ton of novel data on the behavior of Atlantic salmon as they migrate along the coast of Greenland and begin to make their way back home.”

Mark Renkawitz, a colleague at the Northeast Fisheries Science Center, just submitted a scientific paper for publication detailing that 2010-2012 effort. The team is excited to see the information get out to a larger audience and to take what they learned and apply it to today’s work. “We are optimistic that many of the tags we just put out will last and we will start getting data back in 2019,” Sheehan said.

This research project is one of many occurring during the International Year of the Salmon (IYS) in 2019. IYS is an international effort to bring awareness to the plight of the species and to encourage the public to take actions that can help recover the population. “This tagging effort furthers one of the main goals of IYS: to develop a better understanding of the factors driving salmon abundance and the challenges Atlantic salmon face,” Sheehan said.