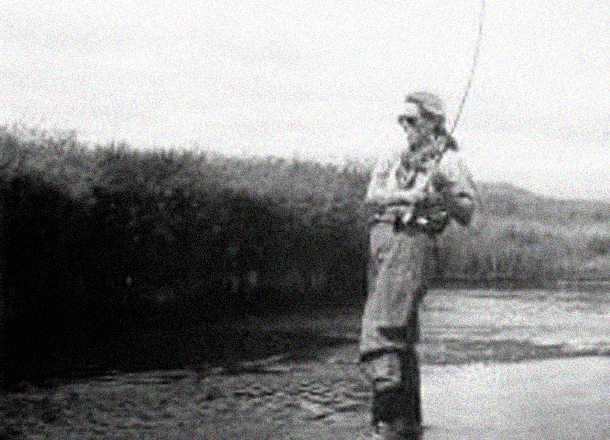 The Series: Important women in the history of fly fishing

[dropcap]W[/dropcap]hen your grandparents are Alfred and Louise Miller, better known as Sparse Grey Hackle (1892–1983) and Lady Beaverkill (1900–1992), you might think that your passion for angling would begin early in life. But that was not the case for Margot Page. Page was born and raised in Connecticut, and although she lived near her fly-fishing grandparents, she was never invited to fish with them in the Catskills . . . nor was she interested. She studied literature in college and received a master’s degree. After teaching college English and then working as a magazine editor, she was hired by Nick Lyons as a publicist and copywriter at his New York City firm, Nick Lyons Books. Page was quickly introduced to fly fishing, and to learn about fly casting, she was given a Royal Wulff Fly-O and a private coaching session with Joan Wulff. Many press releases and in-office Fly-O sessions later, Page left Lyons in 1985, moved to Vermont, and became a freelance writer.

From 1985 on, Page contributed articles to such magazines as Countryside, American Health, New Woman, Fly Rod & Reel, and Trout, and her essays have been anthologized in numerous publications. She was editor of the American Museum of Fly Fishing’s quarterly journal, the American Fly Fisher, from 1990 to 1996; successfully raised $40,000 to stop an industrial project on Vermont’s Batten Kill River; and on 28 August 1989 became the first woman to contribute an article to the New York Times outdoor section. Page’s books vaulted her into the limelight of gifted writers. She was the first female to write an outdoor angling story for the New York Times.

In 1995, Lyons & Burford published Page’s first book, Little Rivers: Tales of a Woman Angler. This was the first book of essays written by a woman about her life and the influences of fly fishing in it. The acclaimed book was promoted as “the voice of one of the fastest-growing segments of the sporting population” and was well received across the country. Since then, she has published two other books: The Art of Fly Fishing and Just Horses.

After she left her position as editor with the museum, Page was asked to become a founding advisor and then a founding board member for Casting for Recovery. She helped develop and publicize their retreat program for breast cancer survivors, envisioning it as a national nonprofit that would offer healing tools for women all across the country. For her efforts, she was recognized by the Susan G. Komen Breast Cancer Foundation in 1999.

Margot Page lives in Sunderland, Vermont, and is again working with Casting for Recovery, using her strong writing background and appreciation for angling to promote an important cause that is close to her heart. Page and Lady Beaverkill were finally able to fly fish together on the Batten Kill River in 1986.

Stay in touch with the Museum and its On Fly in the Salt initiative . . .  Regular updates on the exhibition and the Indiegogo campaign will also be posted on the Museum’s website. Author Catherine E Comar’s book received great reviews. The women profiled are amazing, and that alone makes for an interesting read. The next printing is due out shortly.