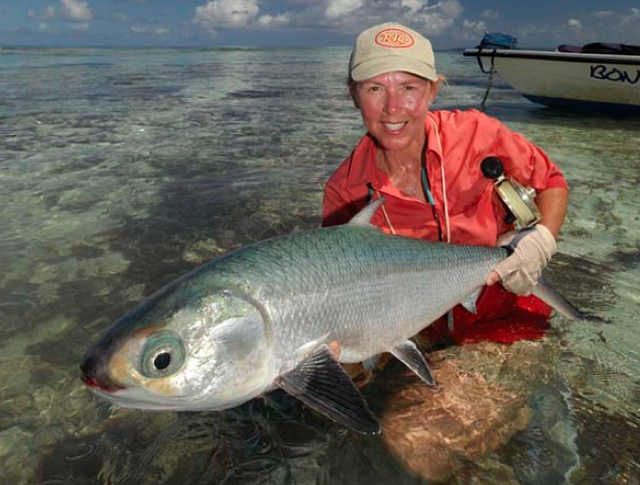 The Series: Important women in the history of fly fishing; Cathy Beck All “Exhibition Profiles” are from the book “A Graceful Rise” written by Catherine Comar, executive director of the museum. Promotional narrative for The American Museum of Fly Fishing is provided by Fly Life Magazine.com. Copyright the American Museum of Fly Fishing (AMFF) – 2014. NOTE: Several of the photos in this original text profile of Beck are not found in “A Graceful Rise.” However, the book profile of Beck has several other unique images.

[dropcap]O[/dropcap]ne name that is synonymous with fly fishing and casting instruction is Cathy Beck. Beck was born and raised in northeastern Pennsylvania. Her family owned a farm, and it was not unusual for Beck and her siblings to be found fishing in the ponds and local streams. She began to fly fish in 1978 after receiving casting instruction from another Pennsylvania native, Barry Beck. The pair has been inseparable since.

The couple eventually purchased his parents’ sporting goods store in Berwick, Pennsylvania, and decided to expand some of the store’s offerings. A fly-fishing school and guiding services were added, and the focus of the retail merchandise was changed. While operating this store, Beck traveled in pursuit of photographic opportunities and began to have images published. The Becks sold the store in 1992 so that they could pursue careers centered on fly fishing and photography. By this point, Beck had been featured in all of the major fly-fishing magazines. Her skill as a fly fisher was being honed for what would become a career of teaching and fly-fishing travel around the world. Beck wrote her first book, Cathy Beck’s Fly Fishing Handbook, in 2002, with a revision in 2005. Her DVD, From First Cast to Double Haul (2008), has helped hundreds of people get started in fly fishing and has helped many others to unravel the mystery of the double haul. In addition, the Becks have worked together to publish Fly Fishing the Flats (1999), Pennsylvania Blue-Ribbon Fly-Fishing Guide (2002), Outdoor Photographer’s Handbook (2004), and Fly Waters Near & Far (2005).

Cathy Beck and her husband live in Benton, Pennsylvania, near their home stream of Fishing Creek. They offer guiding, and Beck teaches private casting classes. Together with Frontiers International, they host fly-fishing trips around the world, as well as safari photography trips to Africa. She is on the pro staff of Sage, Tibor Reel Corporation, Redington, Smith Optics, and RIO. Teaching fly fishing is a habit we should all have. Beck photo. A pirarucu from the AGUA BOA IN BRAZIL. Beck photo.