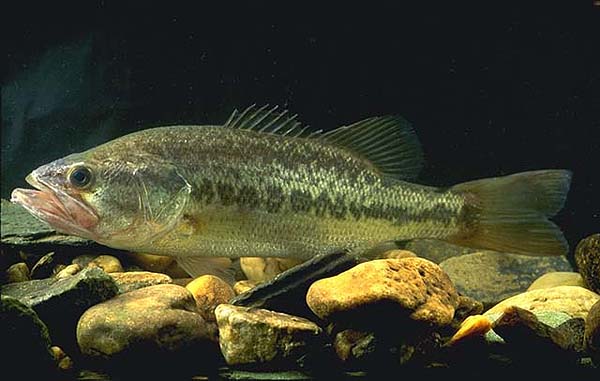 [dropcap]A[/dropcap]few months ago, Jim, a friend of mine and I decided to give the Everglades a shot. The water was down, the bass were biting and the idiots at the South Florida Water Management Department (SFWMD) didn’t show on their schedule that they had plans to screw up the fishing by releasing water. We made it to the ramp we like to launch from at the Holey Land Wildlife Management Area just off State Road 27, which is bordered by Rotenberger and Everglades Wildlife Management Areas (part of the most northern extent of remaining Everglades sawgrass marsh) and just south of the border of Palm Beach County. It’s not used much mid week. When the water is low, it’s a slippery deep banked ramp (if you can call it that) with loose, large chunks of ground up limestone that has eaten more than one two wheel drive vehicle. 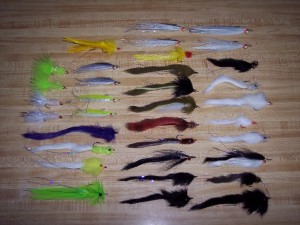 Bob’s collection is similar to these flies. Above flies were tied by Jim Hester. (Hester photo)

The day we went was mid week and only one other trailer was there and Jim knew who it belonged to and knew that he always hit the water pre-dawn.

When we got to the ramp, got the boat in the water and were ready to go it was 9AM. We decided to climb the man-made barrier just opposite the ramp. Climb the bank to a man-made dirt road that provided access to the pumping station and see if the largemouth bass had piled up against the spillway wall waiting for an easy meal. Acres of bass were there and every cast produced a fish, anywhere from 4- to 5-pounds, but most were 2- to 3-pounds.

NOTE: The Holey Land Wildlife Management Area canal system could take you all the way to the west coast of Florida – with a few portages. In the winter, no mosquitoes to speak of and many make the camp-out and fish the whole system.

When we got to our “zone” and started to fish, we hit the jackpot. One after another with a couple of 6-pounders thrown into the usual mix of 3- and 4-pounders. After about two hours, and heading north to where it’s usually even better, we heard a boat coming up fast on us. It was three guys in a beaten up bass-like skiff with a boom box deafening the stillness. The fattest of the three fat guys threw his cigarette in the water along with pitching an empty beer bottle that broke on a limestone outcropping. They all thought it was hilarious and looked like they’d all been into the cooler many times for liquid refreshments. When they came up on us, they disingenuously tried to engage us in the usual how’s it goin’ BS. We said fine, but if you guys double back a few miles, turn off the boom box, you’ll find the fishing is good. We’re headed north, ahead of you, and behind a few folks ahead of us. When we or they come back, we’ll give you a report. That didn’t sit well with the overly tattooed driver who turned sour and gave us the finger as he sped off ahead of us. They started fishing about a half mile from us, boom box blaring. We watched them fish and we knew they’d catch a cold before they’d catch a bass. We waited for a while then proceeded with the boom box faintly heard. They seemed to have adopted a habit of full speed and fish what they determined to be “fishy” water. We knew that if the kept going they’d hit a curve that had a huge stump, buried just below the usual low waterline, that required “local” knowledge to avoid and make safe passage. 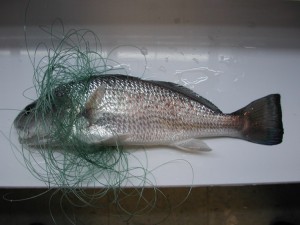 This tells the story of what discarding of fishing line can cause.

We were disgusted with the trash they’d been pitching in the water. We picked up birds nest fishing line, floating butts, fast food wrappers – filling a 10 gallon bucket with their discards. Soon, no boom box noise about a mile from harms way curve. When we reached the stumped curve. There they were. Their boat as smashed as they were. Almost the whole bottom ripped out. Cooler and everything in the boat in the water: full beer bottles, wet cigarettes, useless boom box and dozens of CD’s afloat, an empty vodka bottle and three bruised and wet, drunk idiots standing on the bank. Bob’s and his fishing buddy Bill were already at the scene. Mutually, we asked if anyone needed immediate medical attention and sheepish no’s were replied.

We picked up what we could and shared the bounty on both boats. It was a rather cool day, maybe 68 degrees and cloudy with a slight southeast wind at 10-miles per hour. We saw the idiots were cold, but winked about not sharing our rain gear aboard to help keep the idiots warm. We raced back to the ramp to insure the idiots would feel as cold as possible. We stayed at the ramp and made the idiots walk up and down and back to their truck with the junk and trash. They got very testy about our putting the trash and birds nests of line in their  truck bed that we’d picked up and they’d thrown overboard.

When they left, they gave us the finger a hollered a salvos of FU. That really didn’t sit well with any of us. Bob said his neighbor was a Ranger, covered the  Wildlife Management Area and was on duty. He’d said he’d seen him in the morning and knew he always brought his personal cell phone. He gave him a call and he answered. Jim told his Ranger friend the story who said they’d just past him and he was going to pull them over because of the crap falling out of their vehicle and not stopping at a stop sign. 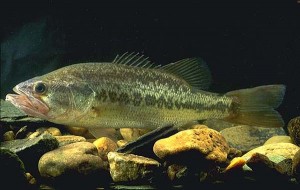 A largemouth bass. The back and head are dark green to light green in color with lighter sides and a whitish belly and underside of the head. A prominent lateral stripe may be seen running from the snout through eye to the base of the tail.

Two days later, Bob called me and said when his Ranger friend approached the three drunks and they got a little nasty, so nasty that he called for back up and the shit hit the fan. The three fat boys were in cuffs in about 20 minutes and were still in jail with a laundry list off offenses, threatening an FWC Ranger, no registration or insurance, no turn signals, open beer and liquor bottles, running a stop light and on and on.

So, the day wasn’t a complete loss and we won’t see the fat boys ever again. I hope.

Jim told me that the busted up skiff had been removed from the canal. Probably the SFWMD guys?

The MO was to cast and hit the spillway wall and let the fly plop into the water. The 10-pounders were in deeper water and not easy to entice. To get a big bass the MO was go deep – behind the herd – with a heavier flies. The water was over 4-feet in deep there. Bead headed woolly buggers, large, weighted nymphs work best. Clouser deep minnows also worked for aggressive fish in this deeper water. Color combinations: brown and white, olive and white, brown and yellow, brown and tan, and all black. Natural colors are best for all bass flies with the exception of popping bugs, which may be brightly colored. When there is not too much grass on the bottom, flies that actually reach the bottom, and are then slowly stripped, keeping them on or near the floor, work well for largemouth bass. Well tied and strong weed guards are mandatory everywhere in the glades. In the Everglades canals you’ll be pitching every fly onto lily pads or casting under over hangs up against the shore. Rarely picking up hits in mid water. Almost all the canals in the Everglades system are not much wider than a two lane road and many as narrow as single lane road.