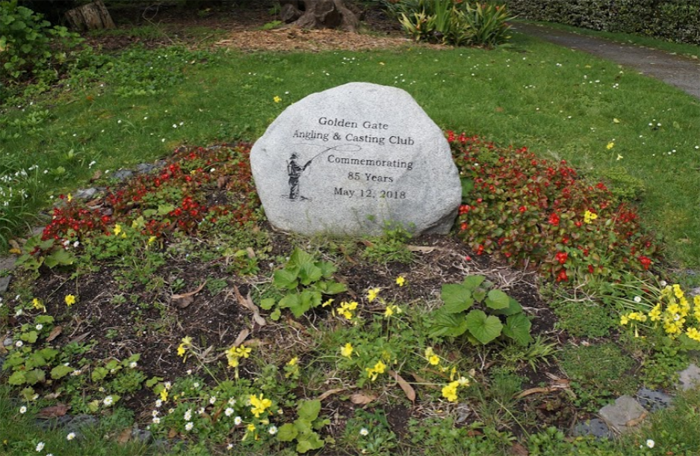 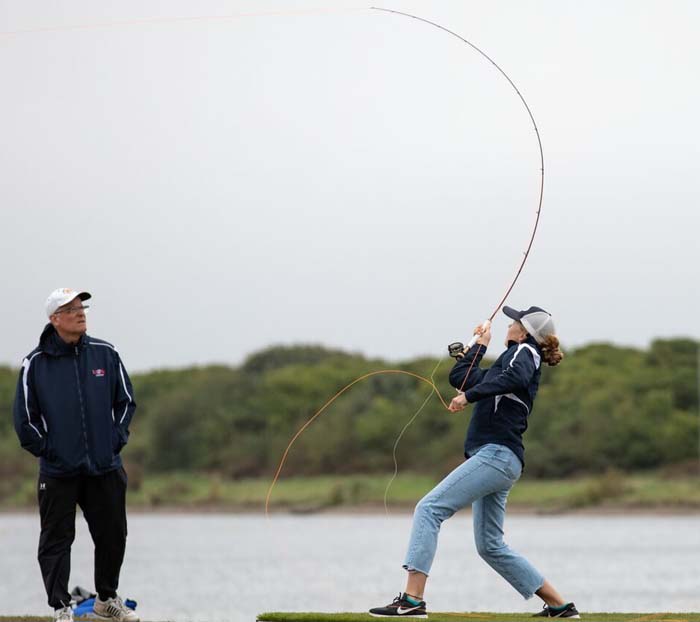 Maxine on with the two-handed spey cast. Image courtesy of Temple Fork Outfitters.

Maxine McCormick is already a fly-fishing legend. But how can a 15-year-old make her way through a world dominated by retirees?

[dropcap]O[/dropcap]ne morning in February, 15-year-old Maxine McCormick leaned her fly rod against her shoulder and watched her coach, Chris Korich, warm up.

Wind chopped the surface of the shallow casting pond. Korich, a 60-year-old 12-time casting world champion, gently whipped the fly rod in his hand. He knelt in a box painted on the concrete shore, aimed at a Hula-Hoop target floating on the surface 35 feet away, and flicked his arm.

A perfect loop of bright green line unrolled across the water, but just as it reached the target, a gust of wind blew the yellow fly at its end a few inches off course. Korich flicked another roll cast and missed. He missed again.

He shook his head at himself and the wind, took a deep breath, and finally dropped his fly inside the target.

“I’d shorten my tippet if I were you,” he said to Maxine, reeling in his line. “It’ll help you with this wind.” He walked back to the clubhouse at California’s Long Beach Casting Club.

Life as the Mozart of Fly Casting

Maxine knelt, aimed, and splashed her fly on target with one, two, three roll casts in a row. She stood, dropped her rod off at the clubhouse, and spent the remaining minutes before the Southwestern Regional Casting Tournament standing on the club’s front porch, staring at a tiny green hummingbird whizzing around the bushes.

Several of the world’s best casters were at the Long Beach club for the tournament, but the only one causing any buzz was Maxine. During an earlier warm-up session, members of the Swedish casting team recorded her on their phones, and a few old men wreathed in cigar smoke called her the future of the sport. In 2016, when she was 12, Maxine won gold at the Flycasting World Championships in Estonia. That same year, she outscored Steve Rajeff, modern casting’s LeBron James, during a tournament in Kentucky. At the next world championships, in 2018, she repeated her gold. This trio of feats made her arguably the best female fly-caster in the world, all before she got her driver’s license. The New York Times called her “the Mozart of Fly Casting.”

And she had been. But Maxine was in tenth grade now. She worried about schoolwork, college applications, her friends. She liked snowboarding. Her family had moved from San Francisco to Oregon two years earlier, away from her coach and casting club. And except for a few hours spent shaking the dust off in the days before the Long Beach competition, she hadn’t practiced her cast in four months.

At competitions like this one, put on by the American Casting Association, a few dozen casters compete in various scored games, most of which are centered around hitting a smattering of circular 54-inch targets with 30-inch bull’s-eyes floating between 15 and 50 feet away. Every competitor starts with 100 points; two points are subtracted for missing the target with the fly entirely, one for missing the bull’s-eye.

Maxine’s round didn’t go great. Five times in a row she missed the same roll-cast target she’d hit in practice, to score an unusually low 95 points, behind Korich and her dad, Glenn, who is also a competitive caster. After her last cast, she shot up from her kneeling stance, her face reddening, and spoke tensely for a moment with her dad before stalking off. “She’s pissed,” Glenn said.

She seemed more perplexed than pissed when I caught up with her a few minutes later to ask how the round had gone. “Not good,” she said, scuffing her shoes in the grass. “I haven’t missed a roll cast like that in a long time.”

Still, she said, she wasn’t going to start practicing regularly. She was looking forward to a summer fishing camp and her family’s annual trip to the McCloud River, in Northern California, later in the year. Otherwise, she was taking time off from casting.

Her phone buzzed. “It’s hard to practice when your friends are sending you Snapchat stories about all the fun they’re having,” she said. She ran off to rescue drowning worms at the casting pond’s edge with her eight-year-old brother, Tobi.

The next morning, Maxine scored a 99 in the dry-fly accuracy competition, then won the event by beating Korich in a tiebreaker castoff, 99 to 97—missing perfection, twice, by inches.

The cast is as fundamentally important to fly-fishing as the swing is to golf or the brushstroke is to painting. In many circles, the cast defines the angler as much as catching fish does. Catching fish requires luck. Casting well requires skill.