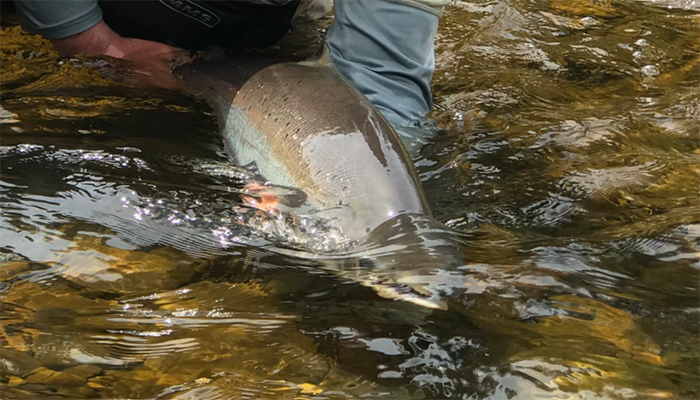 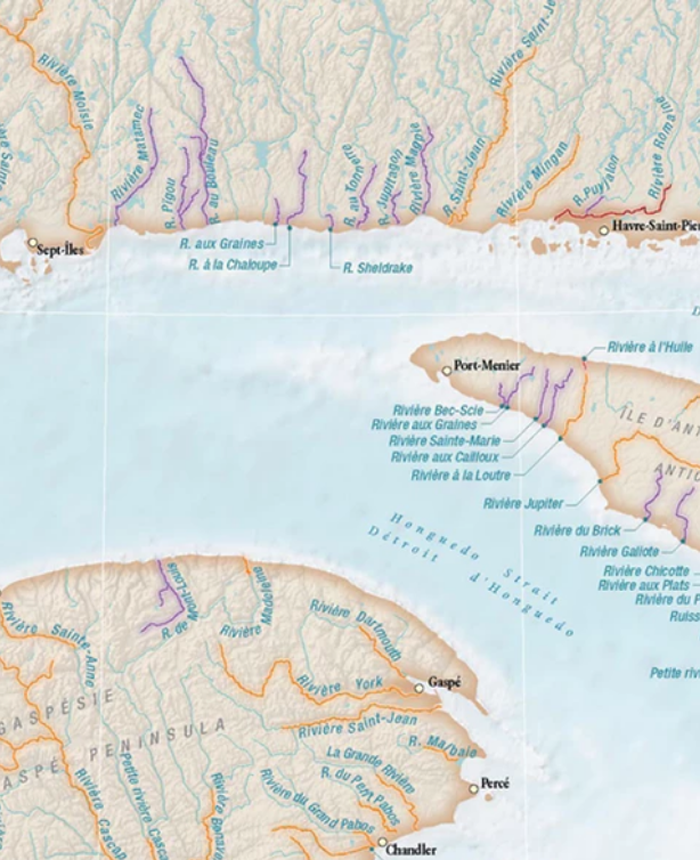 A segment of the new map covering a small part of Quebec’s North Shore, Anticosti, and Gaspé.

[dropcap]F[/dropcap]rom a distance, a new map designed by the Atlantic Salmon Federation is simply another rendering of the East Coast.

But on closer inspection, it’s much more.

It’s the story of the Atlantic salmon, says Neville Crabbe, the federation’s director of communications.

The map, which depicts the Atlantic provinces, most of Quebec and New England, outlines all the wild Atlantic salmon rivers in North America. Each river is colour-coded to illustrate its conservation status.

“When you look at the map, you see the patterns of really what’s happening with wild Atlantic salmon across North America,” Crabbe told Information Morning Saint John.

“And that’s what it’s meant to be. It’s a thematic map that tells a story. It’s not a map that you could use to navigate to any location.”

Christopher Minkoff releases a bright Atlantic salmon in Sector 1 of the Causapscal River on 13 June, 2019. The Causapscal is noted for its early run of large salmon. Photo Jean-Marc LeBlanc.

He said in New England many rivers are black, meaning it’s a lost habitat, after centuries of industry in and along river systems.

“All of a sudden the life strategy that Atlantic salmon developed over millennia ceases to become an advantage because they need to travel freely between the fresh and saltwater,” Crabbe said.

Others are coloured brown to designate the salmon population is artificially sustained through hatcheries, he said.

New Brunswick’s river systems are slightly more colourful, but Crabbe said there is still a lot of black mixed with brown and red, which signifies a high-risk habitat.

Further north in Labrador, the map is speckled with purple, meaning the situation is unknown. That’s the case for many of the 1,100 rivers on the map.

“That’s another dominant story that comes out,” he said. “We just don’t really know what’s going on in much of North America when it comes to wild Atlantic salmon.” 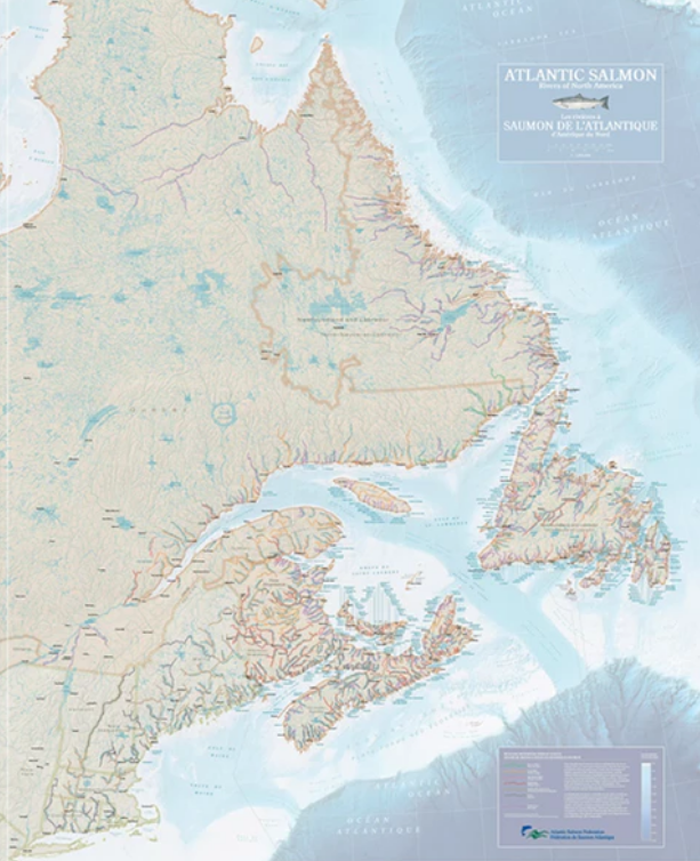 The map might be familiar to some. It’s an updated version of the 1978 creation, which was reprinted several times in the years since, Crabbe said.

“The old map had far fewer rivers identified,” he said. “The old map did not give a contiguous picture. There were insets for certain regions so you couldn’t see the full sweep of the habitat of wild Atlantic salmon in North America.”

A new version was commissioned to recognize 2019 as the International Year of the Salmon, an initiative of the North Pacific Anadromous Fish Commission and the North Atlantic Salmon Conservation Organization.

The area mapped stretches from the Hudson River in New York to the Ungava Bay in Quebec. It features more than 1,100 named rivers.

Chris Brackley of As the Crow Flies Cartography was tasked with the project, and the federation began pulling data from the Canadian and American governments, provincial governments and salmon conservation groups.

“We began pulling this all together and it was immediately apparent that there was a lot of work to do,” Crabbe said. “In the end, Chris called this a ‘dizzyingly complex’ project and one of the hardest he’s ever worked on in more than two decades of doing cartography.”

It took more than six months to complete — and this is just the first step. 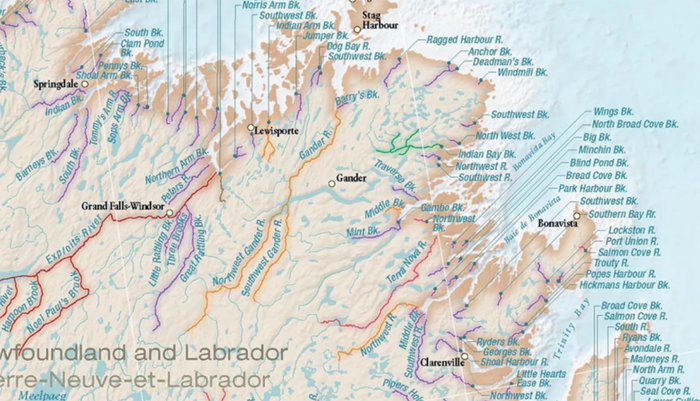 The federation will now embark on creating a digital map and unveiling an interactive version on its website. It will include different layers that will show the federation’s research sites, travel information and real-time river counts, among others.

“We want to step it up,” he said. “We know most people most of the time are getting their map information online and we’re gonna be there in that space to meet them.”

Crabbe said he hopes two things will come out of the project — that it raises awareness about salmon conservation and, more importantly, that it has the capacity to inspire.

“I grew up with National Geographic and Canadian Geographic maps pasted all over my room and I remember just laying there at night and looking at them and thinking of you know visiting those places and the things you could do,” he said.

“And maybe in this case people will look at the map and realize there are salmon rivers in their backyard that they didn’t even know about.” 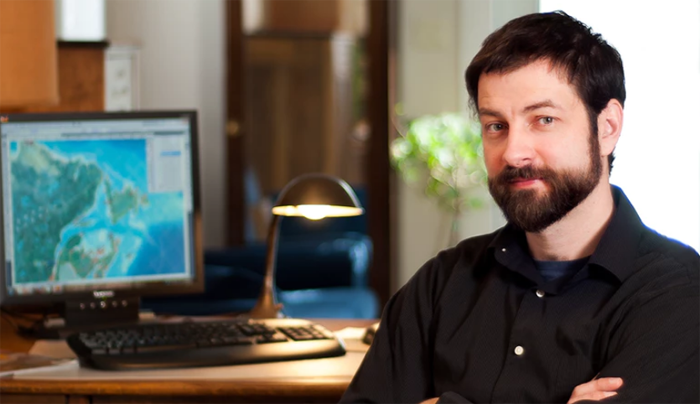 Cartographer Chris Brackley related Atlantic salmon rivers to the world in which they lived, and provided the best assessment information of the salmon runs available at this time.

To get a copy of the maps – email savesalmon@asf.ca

Celebrate International Year of the Salmon and Join the Atlantic Salmon Foundation . . .