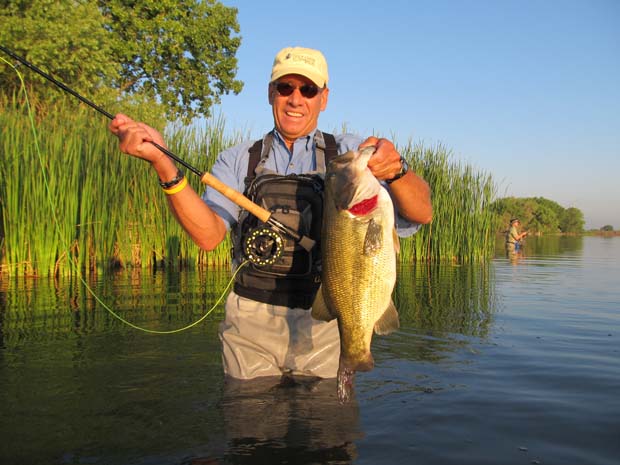 South Florida largemouth bass… in all the unfamiliar places

[dropcap]F[/dropcap]rom the get-go and for more than 20 years, my Florida fly fishing tastes ran toward the salt: Keys, Everglades National Park (ENP), surf fishing for snook on the east and west coast, and on the east coast for bluefish, assorted varieties like Spanish macs and blue runners, and the occasional mishap of hooking a 50-pound spinner shark.

When my money faucet slowed to a trickle several years ago, I started doing walk-in fishing with a fellow writer and guide, Steve Kantner (The Land Captain): Tamiami Trail west, canals, spillways and the surf, all offering up tarpon, snook, redfish and the usual fare when fishing the Atlantic or Gulf. Steve taught me everything about walk-in and all the productive places in South Florida.

Go with the pro

Then, a few years ago an advertiser with Fly Life, Thadeus Ragan – a tournament level bass fisherman, invited me to start fishing with him and whole new bandwidth opened up. We fished the canals and spillways of a place called Holey Land (in the Everglades canal systems bordering Broward and Palm Beach counties), I-75 canals (East) and also the canal system that borders the Tamiami Trail east (Everglades and Miccosukee Indian tribal lands), Lake Okeechobee and the chain of lakes north of Lake O.

There were days when 50 largemouth bass (3- to 12-pounds – average around 4-pounds) were caught along with mudfish, panfish and a variety of exotics. Some days bass would be stacked up at one particular spillway so thick you would think you could walk on them. They’d pile up for 50 to 70 yards down the canal with their backs showing. Each cast a hook-up. Our best day was 60 plus bass in five hours. Thadeus out-fishing me almost two to one. He was spinning, and I fly casting.

Bass are found in all the lower 48 states. They can live happily in summer’s hot water, winter’s cold water and in filthy pond water that you wouldn’t step in. When they’re on the bite, they’ll aggressively attack a fly, lure, bait or Cadillac bumper. They fight hard and become aerialists for your pleasure. I’ve come to revere them as the best – pound for pound – gamefish.

Here in Florida, the best bassin’ is in the spring – spring means the end of the dry season is about to happen. There’s always low water before the rains. The spring also coincides with spawning season (panfish are on the same schedule and cohabit with bass and also attack with a vengeance). Big ladies in the double digits range will spawn ridiculously close to shore – very shallow water. The bulging females make nests and guard them as do peacock bass and panfish. Site fishing becomes the ploy here, but inducing a bite isn’t that easy. The gals have changed their minds. You’ll need to pester her to get a bite – the same is true for peacocks and panfish. Since it’s all catch-and-release, put her back right where you hooked up, at her nest. We want more bass, not less bass.

While bass are aggressive, they can turn-off or be difficult to locate (get to know the turf you fish), and that’s when know-how comes into play. Look for fallen trees spiking the water, floating vegetation, lily pads, rock formations, drop offs and brushy over-hangs. Anything that provides cover. Bass, like snook, are ambushers. Mornings and evenings will produce better in the summertime. 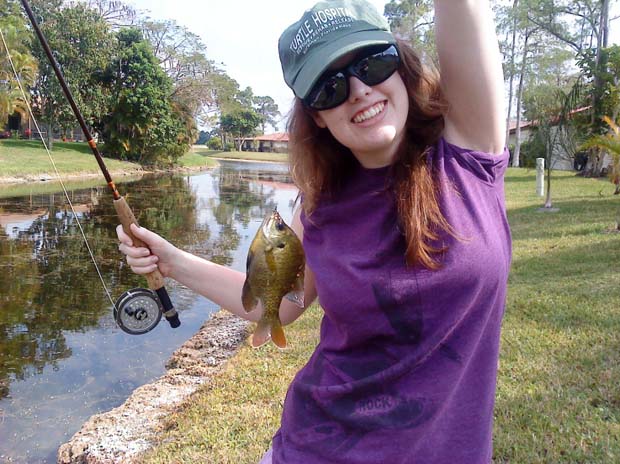 Contrarily, I’m not all-in on big, bushy flies. The tournament guys have slimmed down their lures and I followed that by using sparsely tied – 2- to 3-inch long, wide gap hook flies tied on 2/0 or 1/0 or #1 hooks with marabou or yarn bodies and hen feather tails – both patterns’ tails supported by mono folded to make a loop – tied to the hook at the bend (25 pound test) and always use loop weed guards. Both patterns (several color combos) look “wormy” in the water. Bass are not persnickety about the caliber of your self-tied fly – don’t fret over not having a pro-tied look. Bass don’t discriminate like trouts.

To get a little deeper, I’ll go to a Dahlberg Diver tied on 2/0, 1/0 or #1 hooks and smaller along with my favorite fly of all time, the muddler. Also, lead barbell eyed Deceiver-looks like patterns and Clousers work like magic on any given day. Too, red-headed poppers with rubber legs will always get attention.

Along with good casting skills (you must be able to cast accurately on one or two false casts 30- to 50-feet), it’s how you wiggle the worm that is paramount to success. Here’s the skinny. My tournament friend has four basic retrieves; one, let the fly sink and sit like it’s dead, then slow tweaks – followed by longer, faster pulls; two, off lily pads he’ll use a high stick retrieve (when fly fishing) that is continuous so the fly never really sinks below the water; three, with poppers he’ll just keep the fly moving in short but deliberate, erratic pulls; four, with weighted flies the retrieve is just like jigging – sink, pull, sink, pull.

Rods and reels – planty of room for pickin’ here

For windy days and using big bushy flies in open water, you might need up to an 8- or 9-weight (whatever your preference is). That said, I’ve found my fast action-tipped 5-weight can easily manage all conditions and flies. For the last half-dozen years, that selection has worked perfectly on walk-in fishing. On a boat, I’ll take a 5-weight and 7-weight.

For reels, my Made in the USA reel is one with a spare spool so my fast action-tipped 5-weight can become a slower action when I use my spare 7-weight line I keep in my fanny pack.